Is love the price that beauty queens have to pay for the coveted crown? Or is the crown “cursed” as some speculate?

Beauty pageant watchers and aficionados have noticed a recent pattern of Miss Universe Philippines breaking up with their partners during their reign.

This came following the breakup of Miss Universe Philippines 2021 Beatrice Luigi Gomez with her long-time girlfriend, Kate Jagdon, who confirmed the news on her Instagram Stories.

Breakups are not easy and under public scrutiny—like what the beauty queens go through—the situation gets more abrasive.

While speculations that the crown may be “cursed” or the pageant organization does not allow relationships for queens representing the country, there are obviously different reasons why people choose to end their relationship.

Some of the former beauty queens, who parted ways with their partners during their reign, noted the challenge to their former partner adjusting to a very public life. Others believe it’s the demanding and high-pressure role to her community and country (and the universe, when lucky) that contribute to their split.

Let’s have a look at the MUPH queens who went through breakup with their partners during their reign. 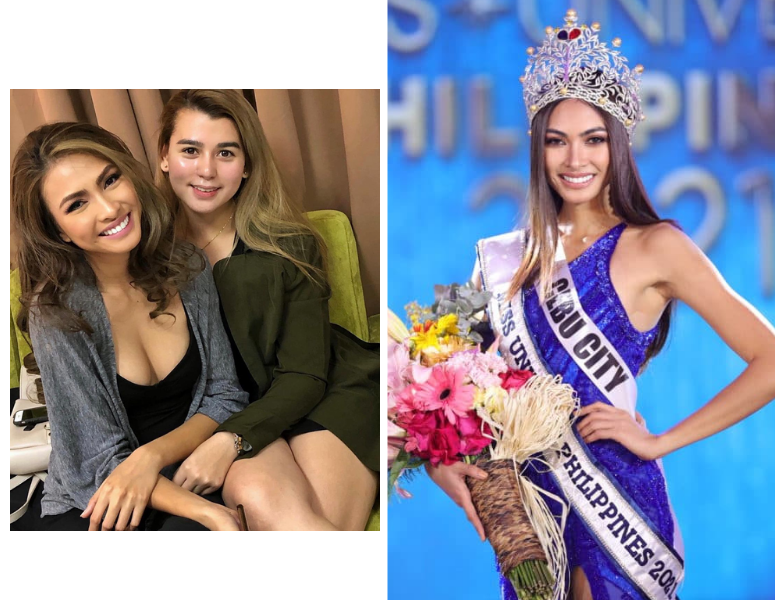 Less than a month before Gomez is set to compete in the 70th Miss Universe in Israel, her girlfriend Jagdon, posted on her Instagram Stories that they have already broken up after seven years of being together.

The conformation came following rumors that the couple has already called it quits.

Netizens noted that both Gomez and Jagdon removed their couple photos from their respective Instagram accounts a few days before Jagdon confirmed the split.

On Nov. 23, Jagdon shared on her Instagram Stories, “Bea and I have parted ways. I am simply taking this step to move forward and go on with my life. Nothing more.”

She also explained that it was a “conscious decision” to keep quiet during the past few weeks, which she described “the most difficult time of my personal life.”

With their breakup, Jagdon said, “We all go forward with love and respect and I wish Bea the best of luck in her journey.”

As of this writing, Gomez has yet to address the issue.

Jagdon also penned a lengthy post (which has now been deleted) congratulating Gomez on her win.

It was during the the MUPH 2021 interview challenge when Gomez, who advocates for gender sensitivity and awareness, talked about Jagdon, who she said she shared her hobbies and love for sports with. 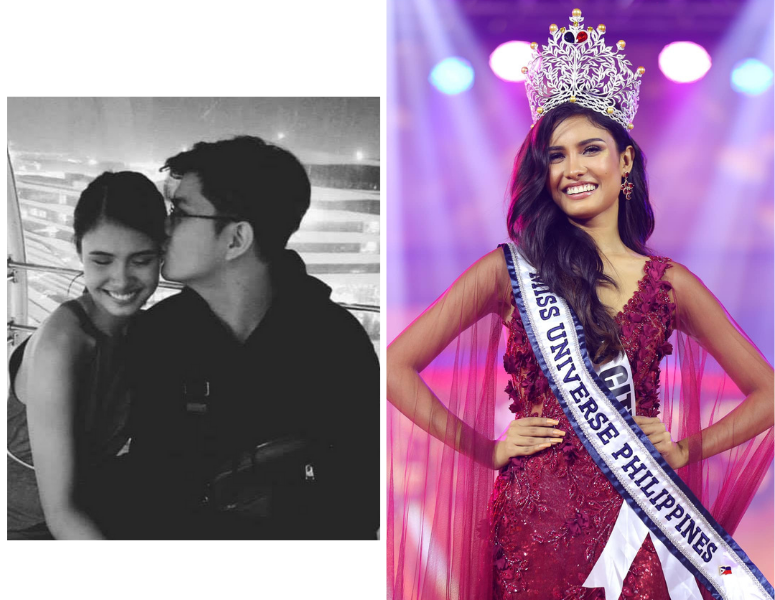 A few days after Rabiya Mateo represented the Philippines to the Miss Universe 2020 pageant in Hollywood, Florida, her boyfriend of seven years, Neil Salvacion, confirmed on social media in June that they have called it quits.

Days leading to Salvacion confirming their breakup, fans speculated that their relationship was already on the rocks as Neil did not post anything related to Mateo’s Miss Universe run, like what he did during the Miss Universe Philippines 2020 competition.

Salvacion also deleted their photos, while Mateo was posting photos of her stay in the US, including Instagram Stories of her with Pinoy Big Brother alum Andre Brouillette, which further fueled the breakup rumors. (Mateo clarified that she and Brouillette were only friends and workmates under Mercator co-founder and Miss Universe Philippines creative director Jonas Gaffud.)

In her recent interview with Pep.ph, Mateo addressed the issue hounding her and Salvacion’s breakup.

Mateo said that while the public saw them as “still okay” before she flew to the US for Miss Universe, she said there was a different story behind what the photos and video clips tell.

“We tried to conceal as much as we can. I don’t want na puputok ‘yung issue na hindi kami before pa ako mag-compete. It’s gonna be a big headache on our side,” she said.

On the reason of their breakup, Rabiya shared, “Iba ‘yung pagiging public figure. Siguro ‘yung hindi niya na-prepare ‘yung sarili niya na everybody is gonna have a say about you.”

Mateo added that during the competition, some fans put a pressure on Salvacion to post something about her and bombarded him with questions if they are still together. “I don’t want him to feel that kind of pressure kasi mahalaga rin po siya sa akin,” she said.

Despite them parting ways, Mateo said they are both happy at where they are. “He’s still my best friend. If he needs me, I’m gonna be there,” she said. 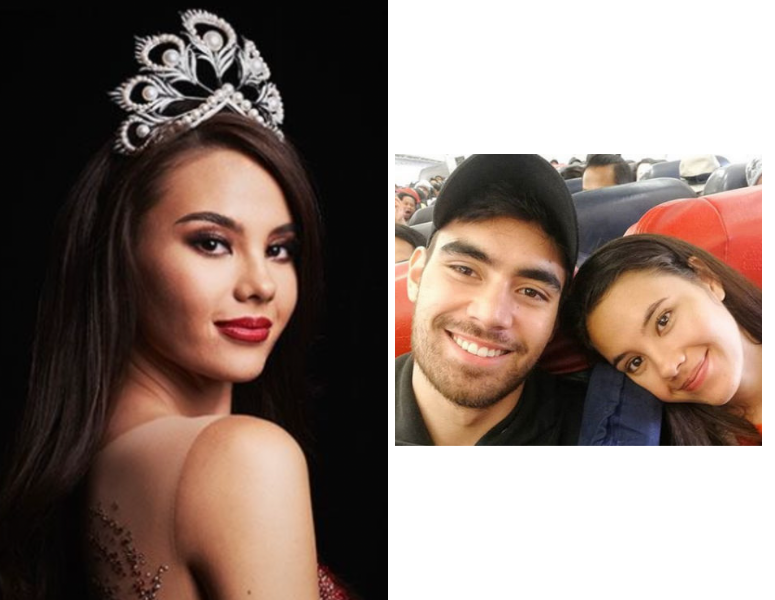 In February 2019, Catriona Gray confirmed that she and boyfriend, model Clint Bondad, have ended their six-year relationship.

With the Mikimoto crown on her head and the Miss Universe title under her belt, Gray said during an interview in Tonight with Boy Abunda that relationship problems already manifested even before she competed in Miss Universe held in Thailand in December 2018.

During the pageant, Bondad was spotted cheering on the sidelines when Gray won the title. Gray said at the time, she and Bondad were not in speaking terms.

“It was really tough going through the competition with that happening at the same time but I had to keep reminding myself that this was a once in a lifetime opportunity,” Gray said.

Gray also said she wanted to establish an identity of her own, which she was not able to pursue as she and Bondad became a couple when she was 18 years old.

“When you’re together for so long and you start off from a very young age, you grow. Whether that be in your personal or in your career—sometimes you just outgrow each other,” she said.

‘With my Koala’: Sam Milby’s first TikTok is an African tour with girlfriend Catriona Gray

In a separate interview with Tonight with Boy Abunda in March 2019, Bondad said, “The career of a beauty queen is so different in many ways to that of other career paths and even more extreme then that of an actor or public figure. Incomparable.”

He added, “It’s a winner takes all situation and it kick starts everything into motion with an explosion, but on top of it all, it’s compressed into a single year of reign.”

“Nobody can be blamed for things that simply happen and I actually believe that this is the best ever that could have happened for both of us. She will go down as the best Miss Universe in history,” he said.

Bondad also cited in a snap interview with TV5’s MJ Marfori in February 2019 the pressure of being under spotlight took a toll on his and Gray’s relationship.

“One reason is I’m a little bit conscious. I see her and she’s surrounded by 20, 30 people all the time,” said Bondad.

Bondad is currently in a relationship with German named Mia Anastasia, whom he introduced to his Instagram followers in February.

Meanwhile, Gray is in a relationship with actor and singer Sam Milby. Their relationship was made official in a sweet Instagram post by Milby with the caption, “Worth every second of the wait. Most special birthday yet.” 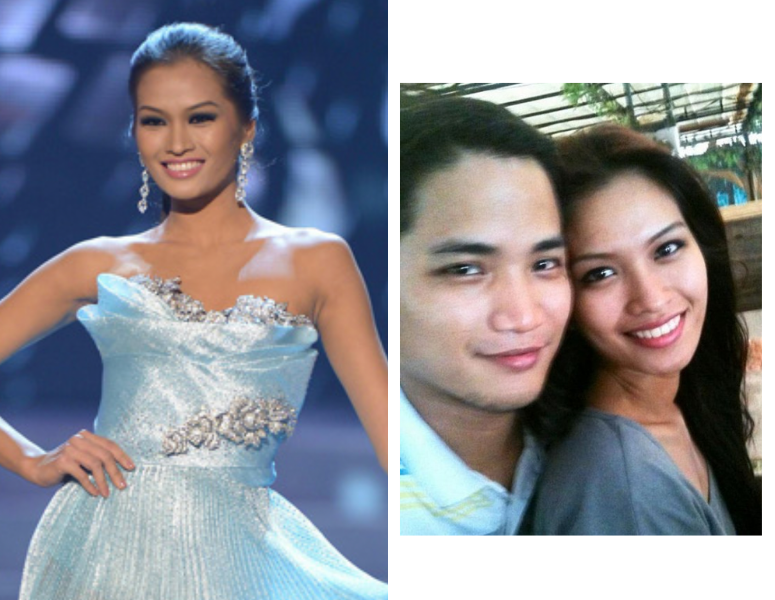 Janine Tugonon’s separation with her boyfriend, Jaypee Santos, was revealed during a TV guesting in 2013 when the beauty queen said they were not in good terms.

“Honestly, ngayon we are not in good terms. Siguro may nangyari lang na hindi ko in-expect na mangyayari,” Tugonon said during her guesting on ABS-CBN’s morning show KrisTV, where Santos was also present.

Tugonon revealed that one of the reasons of their split was her communication with Danny O’Donoghue, the frontman of the Irish pop rock band The Script.

During a meet-and-greet at his band’s concert in Manila in March 2013, O’Donoghue was reportedly smitten by the beauty queen and asked her to follow him to Twitter and promised he will follow her back. When they got connection, O’Donoghue sent Tugonon a direct message, which started their constant exchange.

Tugonon said her communication with O’Donoghue did not sit well with Santos, which opened the door for an argument that led to their breakup.

At the time, Santos said he is still pursuing Tugonon but knows that she needs time to assess things.

Their controversial KrisTV appearance became fodder for netizens who called out Tugonon for allegedly choosing to communicate with O’Donoghue despite still being in a relationship with Santos.

A few months after the debacle, Tugnon said in an interview with ABS-CBN’s The Buzz that she was leaving the country for good to study in the United States, where she is now based.

During the interview, Tugonon admitted she was at fault because of what happened at their KrisTV guesting.

She also set the record straight that O’Donoghue was not the main reason of her and Santos’ breakup—despite what the public perceived—but them falling out of love was. Tugonon also said the breakup, which she noted was already happening even before The Script’s concert, was a mutual decision.

Though Tugonon said she was attracted to O’Donoghue at the time, she emphasized that nothing went on between her and the singer.