Fans and followers of Miss Universe Philippines 2020 Rabiya Mateo had a field day yesterday after noticing that her boyfriend, Neil Salvacion, had deleted their photos on his Instagram account.

The deleted photos fueled rumors and speculations that the Mateo and Salvacion, who have been together for six years, have already broken up.

The rumors were further fueled when Mateo posted videos of model Andre Brouillette on her Instagram account. On her Instagram videos, Rabiya can be seen hanging out together in Los Angeles, California. The 24-year-old beauty queen is still in the US after the 69th Miss Universe pageant and has been meeting with various Filipino communities there.

His post has elicited a number of reactions from followers, from netizens claiming that the two have chemistry together to fans asking if they should already "ship" Rabiya and Andre. There are those who noted that Rabiya and Neil still have not officially commented on speculations of their relationship status.

But on Thursday, May 27, Mateo took to Instagram seemingly respond to the reports and the rumors. 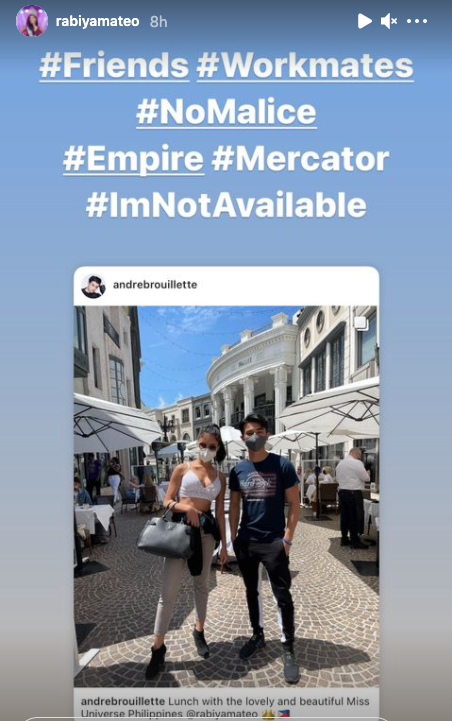 While Mateo did not directly address speculations that she and Salvacion have already broken up, the beauty queen also wrote: "#ImNotAvailable."

Brouillette is a talent of Jonas Gaffud's management agencies Mercator Artist and Model Management, Inc. at Empire.ph. Of course, Gafud is also the creative director of the Miss Universe Philippines franchise.

This isn't the first time Brouillette and Mateo were together too, as it seems the 24-year-old model was with Gafud's team in the US during their Miss Universe preparations.

Brouillette interviewed Mateo in the Empire Philippines YouTube channel days before the Miss Universe pageant. He interviewed Bernadette Ong of Singapore as well.