Karding, internationally named Noru, was expected to be a super typhoon as strong as Odette—a storm that wreaked havoc in Visayas and Mindanao. While the storm ripped through Luzon, it was downgraded to a typhoon thanks to the Philippines' shield against turbulent weather: the Sierra Madre.

The super typhoon touted maximum sustained wind speeds of 195 km/h on Sept. 25, with PAGASA raising alerts to Signal No. 5 in Quezon, Pampanga, Bulacan, and Rizal. In Metro Manila and Nueva Ecija, heavy rainfall warning was issued in anticipation of the storm.

But as Karding hit the Sierra Madre, the country's longest mountain range, satellite images showed how its rainband started to shrink.

The weatherman continued to explain how when a typhoon hits the mountain range, it weakens. "Dahil nga may friction with the surface, so na-didisrupt yung circulation ng hangin."

A day before Save Sierra Madre Day, the mountain range trended on Twitter, with social media users noting how it has once again protected Filipinos from typhoons and floods from the east.

Save Sierra Madre Day is observed every Sept. 26, as declared by the late Benigno Aquino III (PNoy) under Presidential Proclamation No. 413 in 2012.

Netizens stressed the importance of protecting the 1.4 million-hectare mountain range as it not only shields from typhoons but also serves as a biodiversity corridor, watershed area, habitat for endangered and endemic species, and a resource for indigenous peoples.

The Sierra Madre is the longest mountain range in the Philippines.

She plays an important role by acting as a natural shield against typhoons and floods coming from the Pacific Ocean.

With the rising sea levels, we must #SaveSierraMadre today and every day! pic.twitter.com/lGQV2wTMpz

#KardingPH was on track as forecasted but downgraded from super to regular typhoon as it hit the mainland in Nakar area. And at 30kph quickly crossed Luzon in about 7 hours. It was intense but fast. The sun is out and we have the Sierra Madre to thank for!#SalamatSierraMadre pic.twitter.com/LsBnMiaSjA

The real MVP, the Sierra Madre mountain ranges, did her thing. From super typhoon to typhoon classification. All the more reason to leave her alone. #KardingPH

Known as the "backbone of Luzon," the mountain range stretches about 500 km across Cagayan, Isabela, Nueva Vizcaya, Quirino, Nueva Ecija, Bulacan, Rizal, Laguna, and Quezon. Does it really protect the upper regions from severe typhoons? 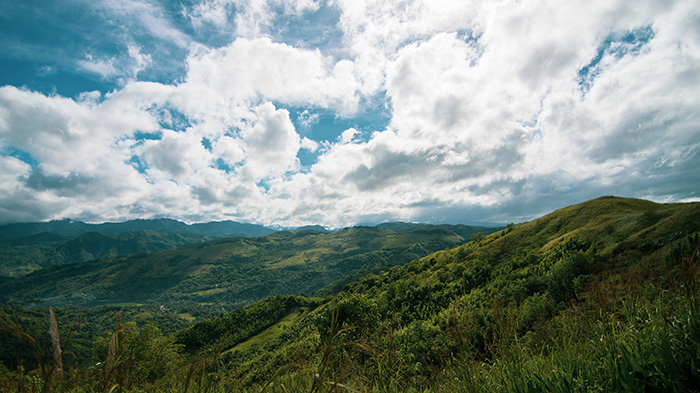 University of the Philippines Diliman Meteorology professor Dr. Gerry Bagtasa told PhilSTAR L!fe that while the mountain range did affect Karding, it mostly influenced the distribution of rain more than its intensity.

"Ang bagyo, pag dumaan siya sa lupa, regardless if may mountain or wall, hihina," he said.

"Kung rugged yung surface, like may mountains, yung paghina will be more pronounced. In terms of Sierra Madre, it's not tall or high enough to have a significant impact in reducing wind intensity of tropical cyclones."

The meteorology professor continued to explain that mountains are actually known to increase rainfall, but other factors such as speed and movement affect it.

He also clarified that the presence of Sierra Madre doesn't necessarily guarantee that rainfall would be less and that it will always make typhoons that pass through weaker.

With a similar track as Ondoy, why was Karding less rainy in NCR? the working hypothesis is ironic and counter-intuitive -> Karding had less rain b/c it was more intense

(MRB=Marikina river basin, manuscript <below> still under review though) ...1/4 pic.twitter.com/263eOTFqGW

Environmental groups and netizens alike called to ramp up preservation efforts and slammed projects that would disrupt or destroy Sierra Madre such as the Kaliwa Dam construction. The project involves building a water supply tunnel and other infrastructure along the mountain range, which will cause permanent environmental damage and destroy habitats.

"The Sierra Madre range is more than mountains—it’s a resource, a protector, and a home," climate activist Jefferson Estela told L!fe.

Estela said the construction is not only "unnecessary" but also "destructive to the surrounding communities and the environment."

"The Kaliwa Dam will threaten physical, food, and ecological integrity. The submergence of 300 hectares of forest will result in the loss of a key carbon sink and a significant contribution to global warming," he added.

According to Haribon, at least 5,000 Dumagat-Remontados live along the mountain ranges and around 300 of them would be affected once construction begins. In addition, 126 species, including the endangered Philippine Eagle, would lose their natural homes.

It also puts the country in debt, as the government will take a P10.37 billion loan from China to finance it.

In years to come, she won't be able to do her thing if the construction of Kaliwa Dam continues.

The project is expected to submerge parts of the Sierra Madre mountain range, including ancestral lands in Quezon and Rizal. https://t.co/bdGJdcD2Zi

As for what everyday Filipinos can do to help preserve the mountain range, the climate activist urges Pinoys to learn about Sierra Madre.

"Join the conservation efforts of environmental organizations. Some NGOs provide opportunities for tree planting and foot patrolling, while others engage in IEC activities. Others support communities in establishing sustainable livelihoods based on non-timber forest products. We can also help by amplifying the voices that must be heard," Estela said.

He added that Sierra Madre also faces other challenges like land grabbing, land conversion, disregard for the rights of indigenous communities to their ancestral domains, and development aggression.

"We can take action. We need to keep telling the Philippine government that it needs to do its job by making sure stakeholders are involved, enforcing environmental laws, and giving enough money to protect and manage our forest resources in a sustainable way."

Here's where to donate for Typhoon Karding's victims and affected communities

Monkeypox to be renamed 'mpox' to avoid stigma—WHO