Style Living Self Celebrity Geeky News and Views
In the Paper Shop Hello! Create with us
Marx Fidel

The reign of the iPhone is over.

A bold claim, I know. But as someone who reviews gadgets and uses both an iPhone and an Android as their daily devices, I can safely say that Androids are just as good as Apple's shiny iPhone—if not better.

Now, I know all the perks and benefits of having an iPhone—I'm what some people might call an Apple Sheep (a fan of Apple products). It's the ecosystem, mostly. With most of my friends and family also using Apple devices, it's easier to reach them with iMessage and FaceTime. And since I work on a MacBook, transferring files to and from my iPhone is one AirDrop away.

iPhone SE 2022 vs. iPhone 13: Should you buy the budget iPhone or splurge on the flagship Apple device?

Taking a bite out of Apple

As much as I am an Apple loyalist, I'm not blind to its flaws. The iPhone lags behind the Android in some respects.

Until now, the latest iPhone 13 still has a big notch on the display, something Android devices have done away with two years ago. Different smartphone makers even got creative with it like the hole punch cutout for the front camera.

Meanwhile, others like Vivo, OnePlus, and OPPO went out of the box in 2019, fitting the selfie cam in a pop-up mechanism (which I actually liked, another unpopular opinion) to give users an uninterrupted display.

Another way Apple fails to beat Android is with creating a true budget smartphone. The iPhone SE 2022 might have a pro-level processor, but at the end of the day, it still looks like the eight-year-old iPhone 6 with chunky forehead and chin bezels. Even the most budget Androids from Realme have fullscreen displays!

In the tech world, a number of mid-range Android devices from brands like OnePlus and Xiaomi have been dubbed "flagship killers" because of how you get premium features without breaking your bank.

The Galaxy S21 FE has a bigger display with a faster refresh rate, bigger RAM enabling you to breeze through apps, more shooting mode features, and a longer battery life (iPhones aren't really known for having the best battery life).

Flagship features for less: The stylish Samsung Galaxy S21 FE 5G is now up for pre-order

Comparing cameras between Android and iPhone is tricky—even Android photos can look widely different from one another. Some phones produce paler photos while others churn out too saturated ones. It's really all up to your taste.

If you look at the photos below, the iPhone captures more detail while the Android snaps a more vibrant photo. 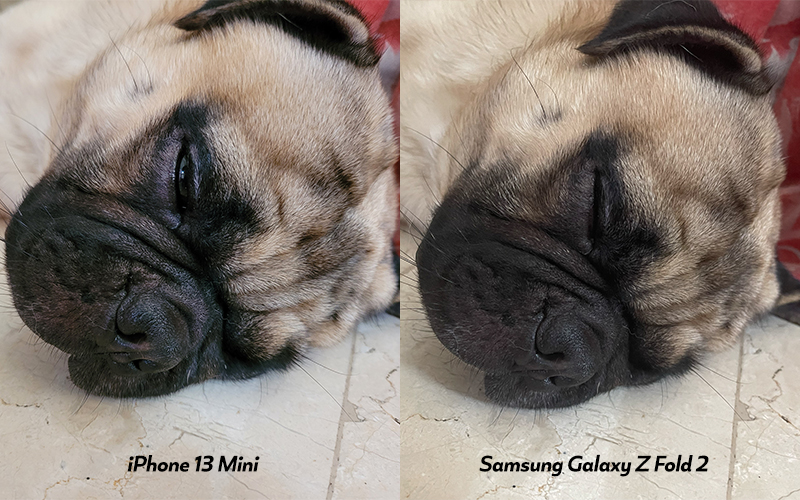 But Android phones offer more shooting modes, allowing you to get as creative as you want with your shots. Some devices carry a macro sensor, perfect for those who want to take super close-up shots of tiny objects.

Thanks to the iOS updates, the iPhone home screen is finally customizable with widgets, but you're still locked with the iPhone user interface. It's a gorgeous interface, don't get me wrong, but users don't really get to add a pop of their personality through it.

Unlike on Android, you can tweak how your phone looks to your liking. You can change up the icons, widgets, the app drawer, and even the font on the clock.

Not to mention, hardware-wise, Android devices also come in varying form factors for different kinds of users. There are devices with foldable displays like the Samsung Galaxy Z Flip and Fold lines. I've been using the Galaxy Z Fold 2 for a while now and this has been my go-to phone for watching videos over my iPhone 12 Mini. Not only is the screen bigger, but the visuals are smoother too because of the 120Hz refresh rate.

USB-C is the most common plug/connector on almost every device, powerbanks, laptops, tablets, iPads, and more charge with a USB-C cable. Almost every device carries this port, except the iPhone with its Lightning connector.

And as Apple users know, the Lightning cable doesn't come cheap at P1,190 a piece from an authorized Apple reseller. Yes, you have the option to buy from third-party sellers, but sometimes, you encounter hiccups with compatibility.

Meanwhile, there's a bevy of affordable, sturdy USB-C cables in the market from brands like Anker, Baseus, UGreen, and Vention.

Even wired earphones are cheaper since most Android phones have a 3.5mm headphone jack. You can buy a decent pair of wired earphones online for under P300, while Apple's EarPods with Lightning connector will have you shell out P1,190.

This may all sound like I'm dissing on Apple, but I still have love for the tech giant. I'm a fan of all of their products, but I just believe that it's not as top-tier or "the best" as people think they are. Give Android a chance, and you'll be getting a reliable daily driver. You'll also be saving a few bucks in the process.