Style Living Self Celebrity Geeky News and Views
In the Paper BrandedUp Hello! Create with us
Rxandy CapinpinMarx Fidel

In a room filled with eye-catching art pieces, Beatrice Luigi Gomez easily stood out—not only because of her towering height but also her striking eyes. She had a meekness about her as she got in glam, but as soon as she walked in front of the camera, she lit up like a firecracker.

Posing and modeling seemed to come as natural as breathing to the Cebuana beauty queen. In between serving fierce faces, Bea would flash a friendly smile, and she was game for anything to get the perfect shot, whether it’s standing on a stool under the sun or walking down some stairs in six-inch heels.

As we sat down to talk, she was composed, poised. She took time to think about how she was going to answer, exuding the grace and wit instilled in her by her pageantry and military background.

But Bea isn’t your traditional beauty queen—there is power in her quiet strength which she atttributes to her upbringing.

Raised by a single mother, Bea grew up in a household full of women. She learned how to be self-sufficient and responsible from her mom, grandmother, and sister.

“I love being a woman. When I was a young girl, I was exposed to Barbie dolls and fairy tales. I had this idea of women not being viewed as brave unless they have a Prince Charming with them,” she remembered.

“But then my mom made me understand that in order to become a woman, you don’t need a Prince Charming. You can be strong as a woman, so I embraced womanhood.”

She learned that she was bisexual in high school, being in an all-girls section in a co-ed school. She came out to her sister and was met with a response all-too-familiar with people in the LGBTQ+ community: “You’re still young and maybe you’ll change your mind when you grow older.”

But when her family saw that she was still the Bea they know and love, they accepted her with open arms.

“My mom saw that I didn’t change as a person. I was still an obedient daughter, I was still a good student, and I was still a responsible person. It didn’t matter to her, my family, and friends that I was into girls,” she shared.

Fast forward to 2020, she would come out proudly on the Binibining Cebu stage and a year later, represent the Philippines in the Miss Universe pageant as the country’s first openly bisexual candidate.

‘You gave me the strength to go through’: Beatrice Gomez thanks supporters after Top 5 finish at 70th Miss Universe 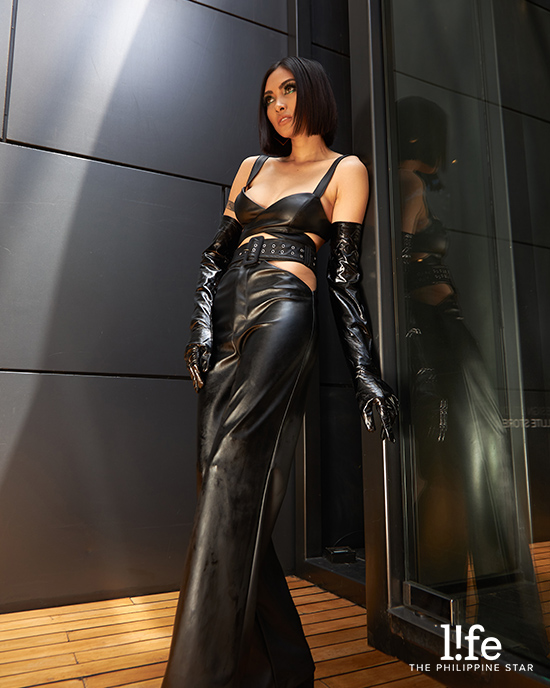 On top of raising the LGBTQ+ flag, Bea is passionate about children’s rights, speaking about the youth with a glimmer in her eye. She talks openly about being bisexual because the queer kids that see her as an inspiration make it all worth it.

She muses about how she experienced discrimination in the pageant scene because of her sexuality.

“There was one pageant that actually rejected me because I am part of the LGBTQ+ community,” Bea spilled about the first time she experienced discrimination in the pageant scene.

“But instead of feeling bad about it, I approached the committee and I told them that if they weren’t open about having an LGBTQ+ member in their pageant, I wouldn’t want to join anyways.”

“I still receive a few comments online about how I’m ‘sayang,’ how it’s such a waste for being an LGBTQ+ member,” she recalled. “But when I received messages from people who are grateful for me opening up, especially in a huge platform like Miss Universe and Binibining Cebu, and knowing that I’ve helped a lot of people through that, I don’t have any regrets opening up.” 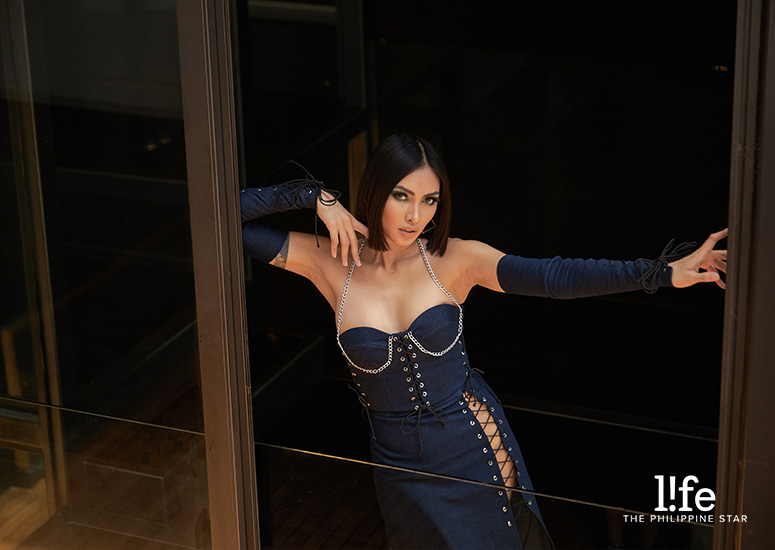 “I think it also helps them, especially since when you’re in you’re teenage years, you’re still trying to figure out who you are. When they’re able to talk to someone who understands and will help them understand about themselves, [they are able to]  exchange idea thoughts, knowledge. It makes it easier for them to grow up and accept themselves,” she added.

Asked about her thoughts on Miss Universe Philippines opening its doors to trans women, she said it will take more discussion with the organization committees.

“MUPH has a requirement which says you have to be legally a female and I don’t think here in the Philippines we have a certain law that allows transgender women to be legally female. So for now, I think it’s impossible for them to join MUP. It will have to take more discussion,” Bea answered.

Curiously, Bea hasn’t actually watched clips of her Miss Universe journey. “First time ko lang makikita yung video,” she laughed as we showed her a highlight reel of the Eliat, Israel coronation night. She smiled as she watched herself glide along the stage in her outfits, pausing to tell us about the intricate details behind each garment.

When she joined the Miss Universe Philippines competition, she was actually scared, expecting an “every queen for herself” dynamic. She was pleasantly surprised at the pageant scene she was welcomed into, albeit experiencing a part of it online.

I know I’m different from other pageant girls, I think it’s one of the things that made me stand out.

“I heard that’s what pageants are like—that women bring other girls down—but when I saw and experienced it myself, I’m glad that women are changing how beauty competitions are like now,” she said, relieved. “Girls tend to help each other out and we’ve become closer that we tend to forget that we’re in a competition!”

But her MU journey wasn’t always smooth sailing. When it was time for her to represent the country on the international stage, she started to feel the weight of the competition on her shoulders.

“With my national experience, I just enjoyed the entire competition. Maybe one of the reasons was I wasn’t one of the frontrunners so I didn’t have much pressure on social media. But during the MU competition, it was like everyone united to look at my social media profile and there was pressure on my performance because everyone was supporting me,” she said.

To deal with these pressures, the Cebuana beauty queen would take time to breathe—her biggest takeaway from the pageant.

“It’s very important to listen to yourself, especially when there’s a lot of noise around you and you tend to lose focus. It’s very important to go back to your core and remember who you are and what your purpose of joining the competition other than meeting other people’s expectations about you,” Bea said. 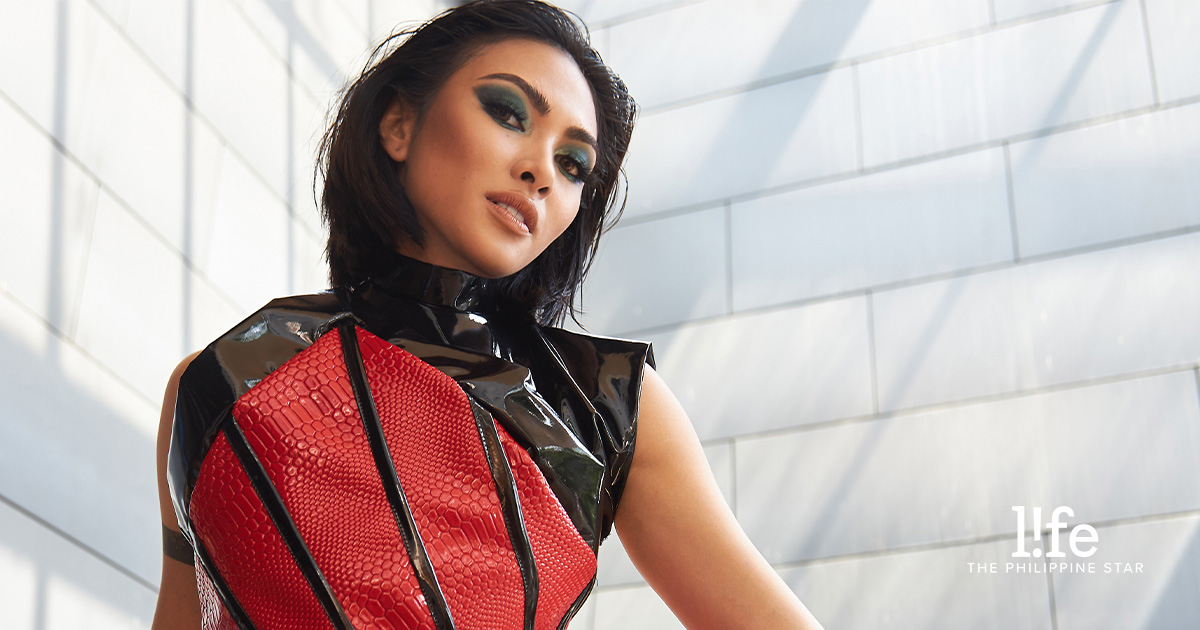 Top and skirt, both by Lanz Angelo 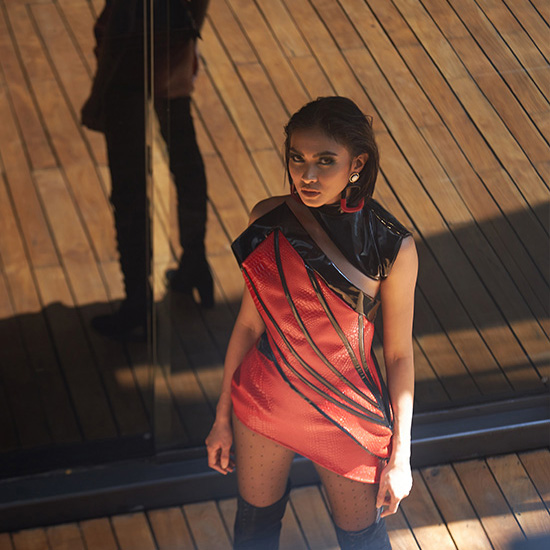 Beauty is deeper and I’m very glad it is what is shown in beauty pageants because that’s what it should be.

In a competitive space like pageantry, Bea experienced getting compared to fellow beauty queens and was subject to criticism.

“I know I’m different from other pageant girls. I think it’s one of the things that made me stand out. I think that’s one thing beauty queens and pageant enthusiasts should really appreciate: each other’s uniqueness because that’s how we see that there are different kinds of beauty,” she boldly declared.

“There’s no certain standard for beauty and that’s how we learn to appreciate one another.”

For Bea, beauty is more than the physical.

“I don’t see someone as beautiful just by looking at him or her. I have to get to know that person for me to call them beautiful,” Bea defined. “It’s more than aesthetics. Beauty is deeper and I’m very glad it is what is shown in beauty pageants because that’s what it should be.”

Her journey to the international stage also seemed to have made her wiser. Even though she only heard stories about the rich cultures of other countries’ Miss Universe delegates, Bea said that exchanging tales with them made her feel like she was able to visit their respective homelands.

“I’ve learned that in other countries, women are discriminated against and violated because they weren’t taught how to stand up for themselves, and I realize that it’s important that we teach each other to empower ourselves and other women. There is a continuous need to educate society about how women need to be treated,” she stressed.

All this proves that Bea is a woman of worth—not only by embracing womanhood, but also by being an inspiration to many others.