Liza Soberano’s beauty transcends cultures and time. She has graced countless magazine covers and has been named in the annual social-media driven “100 Most Beautiful Faces” list since 2015.

So it’s not wonder why the 23-year-old actress has gained a massive following, including several admirers—from local showbiz to foreign personalities and stars. 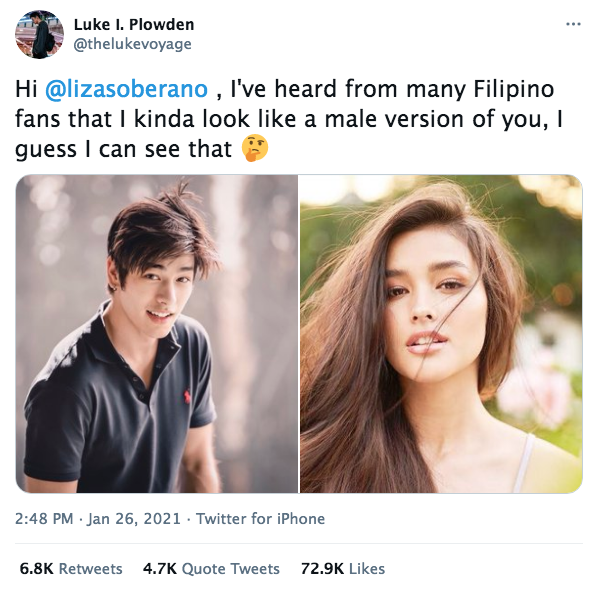 On Tuesday, Thailand-based Japanese-American actor Luke Plowden tagged Liza in a tweet that includes a side-by-side photo of the two.

Plowden’s post read, “Hi, @lizasoberano, I’ve heard from many Filipino fans that I kinda look like a male version of you, I guess I can see that.”

Fans were ecstatic and blew up Twitter with retweets and likes. Some agreed with the resemblance, while others tried to ship the two.

On Thursday, Liza responded to the Wake Up Ladies: Very Complicated and Oh My Boss star with a lighthearted tweet, which seemed to have "bro-zoned" the actor, “Hello long lost brother!”

To which the 25-year-old actor responded, “Nice to finally meet you, twin sister.”

Following Plowden’s tweet, a screenshot of Liza’s Instagram followers page circulated on Twitter, which shows that Thai actor Bright Vachirawit is also following her. Bright is the star of Thai BL series 2gether.

Let’s have a look at some of the foreign stars who have been captured by Liza’s beauty. 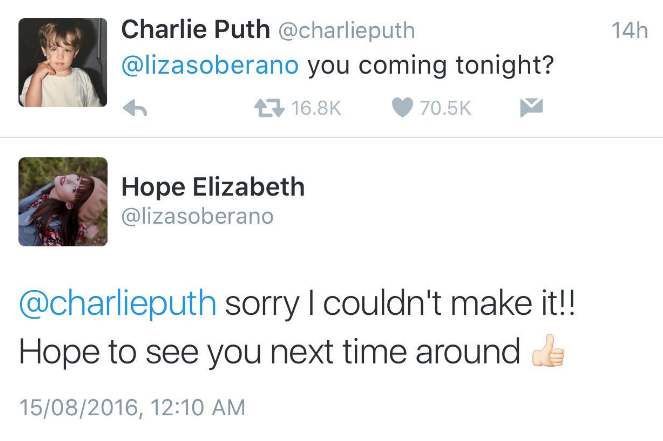 In 2016, singer and producer Charlie Puth posted a video on snapchat of him dubbing a scene in Liza and Enrique Gil’s movie Everyday I Love You, while he is in Manila for his concert.

Charlie said in an interview with MJ Felipe that he did not know who Liza Soberano was until he came across that movie. He said he didn’t know she was famous until he saw that Liza had more followers than him.

This led to the Attention and We Don’t Talke Anymore’ singer to follow Liza on Twitter and tweeted her an invite to his concert. “@lizasoberano you coming tonight?”

Liza responded to the tweet, “@charlieputh sorry I couldn’t make it!! Hope to see you next time around.”

At Charlie’s sold-out concert at the Kia Theater, he described Liza as an “attractive young actress,” which received cheers from the audience. He also told the crowd, “I invited her but she was busy.”

It was reportedly in 2015 when The Vamps’ James McVey first met Liza, when British pop rock band The Vamps guested on ABS-CBN variety show ASAP.

He then posted on Instagram a photo of them together with the caption, “You were so lovely, @lizasoberano”

When the band went back to the Philippines for a concert in 2016, he gave a shout out to Liza in an interview. “Liza, if you’re watching, I’ll sing to you tomorrow at the show.”

After the concert, James posted another photo of her and Liza backstage and said in the caption, “Lovely to see the wonderful @Lizasoberano tonight. I did sing to her… maybe.”

McVey reposted that same photo later that year, then with the caption, “Recreate this next month @lizasoberano?”

He also tweeted Liza on her birthday in 2018. “Happy birthday to my lovely Filipino friend @lizasoberano”

Alex Pall of The Chainsmokers

DJs Alex Pall and Andrew Taggart of The Chainsmokers declared on Twitter, “Going on the record. We are in a love triangle with @charlieputh,” a tweet, which pertained to Liza Soberano when the duo performed in Manila in 2016.

In an interview with PEP.ph, they were asked if they are familiar with any Filipino celebrities. Alex said, “I just read about some hot girl. People kept on tweeting us to invite her to our show. She’s an actress, I think.”

Maria and fruitcake! Such joy!

Lessons from your children, from a pandemic, and from life

Want to be your own boss? 5 millennials talk about what it’s like to be one in their 20s