Ang pao. I believe almost everyone is familiar with these red envelopes containing money given during joyous occasions.

Giving and receiving ang paos during the Lunar New Year is a custom that began in China and in the Philippines, the practice is also done by Chinese Filipinos. But, depending on the family’s established traditions, they would either give out ang paos during the Gregorian calendar new year, or during Chinese New Year, or, if you belong to a particularly generous family, both new years!

Ang pao (红包) is the Hokkien-language pronunciation for the red packet. One might also encounter the spelling hóng bāo, which are the same words but in Mandarin. In Cantonese, the red packet is known as lay see or lay see fung (利是 or 利是封). Ang pao is the more common term used because the majority of Chinese immigrants in the Philippines came from the Hokkien province. I use the term ang pao to my Hokkien friends, but I am also familiar with lay see because my mom’s family is Cantonese. Non-Chinese Filipinos call it ampao, which confused me at first because I know it as the red-dyed rice crispies snack. I also know that ampao is slang for empty or hollow. Therefore, I suggest not using this spelling when asking for ang paos because you might receive the food or an empty red envelope!

Because ang paos are used for different occasions, their designs are also bespoke to the specific purposes they are meant for.

I think the practice of giving out red packets has been adopted by the general Filipino populace already. For example, I have experienced receiving year-end cash bonuses in red letter envelopes from my non-Chinese Filipino employers. Moreover, Coins.ph and GCash have further made the ang pao’s digital adoption into the mainstream easier with their respective Send Ang Pao features, similar to those provided by China’s Alipay and WeChat.

I’ve received my fair share of ang paos over the years for birthdays, getting honors in school, the new year, tokens for family gathering performances and duties, and other celebrations. As a kid, I would look forward to lining up and receiving ang paos from our elders and then checking the total once I got home.

As far as rules or dos and don’ts go, I doubt that the younger generation of Chinoys are particular about these things. I for one will not mind receiving an ang pao containing 4,000 pesos even if an amount with the number 4 in it is supposed to be unlucky. The word for “4” (sì) is a homonym of the word for “death” (sǐ) whether spoken in Mandarin, Hokkien, or Cantonese.

Here’s what the Year of the Water Tiger has in store for you in love, health, career, and money

What I do find a good custom is the use of crisp bills. I have been taught by my elders that it is a sign of respect to hand over crisp and nice-looking bills to people I know, even on any regular day. I follow this as much as I can and keep the uglier notes to myself. In any case, I rarely have old and crumpled bills on me because I do not accept chao ji (rotten smelly bills) either.

I don’t know anyone who likes the physical red packets themselves, after all what made us excited as children was the content inside. But, apparently, for the Chinese, the envelope is what’s more important. Now that I’m older, I realize I have been developing an appreciation for the designs of the red packets even if nobody taught me to do so. I also do not throw out the envelopes and I get jibed for being “so Chinese.” But if you’ve received these pretty and fancy packets in thick card stock you could use them as your wallet like I do, as they are really effective as cash and receipt containers in the bag!

Because ang paos are used for different occasions, their designs are also bespoke to the specific purposes they are meant for, though the majority of ang paos still come in the traditional red, gold, and yellow color motif.

For Chinese New Year or the Gregorian New Year, the red packet theme would always include blessings for prosperity, wealth, luck, and abundance. 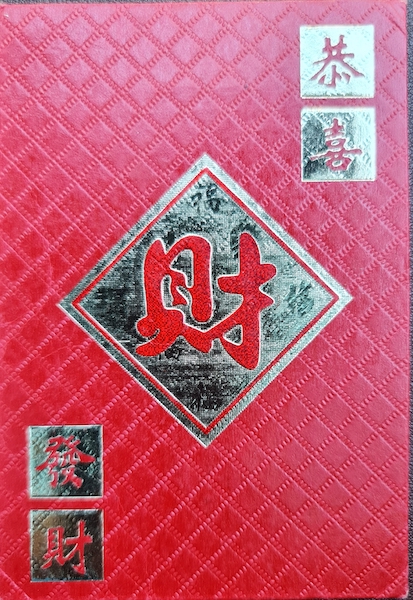 For instance, this envelope is specific to the Chinese New Year because of the words on the upper right corner 恭喜 and 发财 on the lower left, which make up the greeting we are all already familiar—Kung Hei Fat Choi (Cantonese), Kiong Hee Huat Tsai (Hokkien), and Gong Xi Fa Cai (Mandarin).

The word in the middle, 财 or Cai, means wealth, and you can see the hologramic 福 or Fu, which means good fortune, in the four corners of the square.

Meanwhile, this modern packet by Hong Kong Disneyland is not red, but is in yellow with a tessellating round coin design. The words at the top 金玉满堂 (Jin Yu Man Tang) means “may the halls be filled with gold and jade” and signifies wealth. The words held by the Teddy Bear in Yellow, 年年有餘 (Nian Nian You Yu) means “may you have a lot of left over every year”. The bear itself is a symbol of driving out bad spirits and the cat is a symbol for long life. Because of these symbols, this ang pao is fit to be given during the new year or for someone’s birthday.

This new year red envelope includes the blessing of 五福臨門 Wu Fu Lin Men or “may the five blessings descend upon your door.”

These blessings are of 壽 Shou or longevity, 富 Fu or wealth, 康寧 Kang Ning or health and peace, 修好德 Xiu Hao De or to practice doing good, and 考終命 Kao Zong Ming or to have a peaceful death.

A red packet that contains the words 敬賀 (Jing He) means congratulations. This packet is a generic ang pao for any occasion that you want to wish someone the best, like a wedding or graduation. 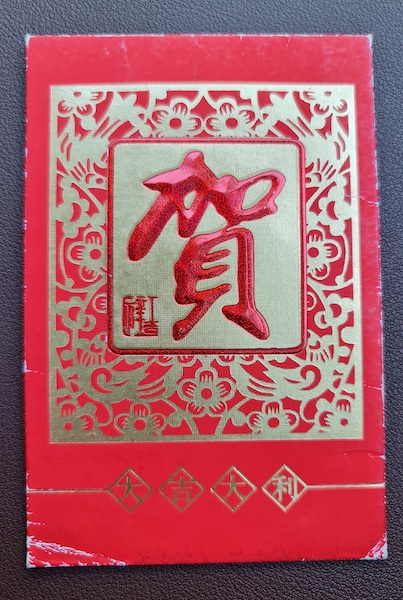 賀 (congratulations) combined with 吉祥 (Ji Xiang) or auspicious and the four words at the bottom 大吉大利 (Da Ji Da Li) or big luck big profit can be used for wishing your clients or corporate partners a good year in business.

I was also influenced by my aunt Mee Len and got myself a set of red packets bearing our surname 麥 Mac. 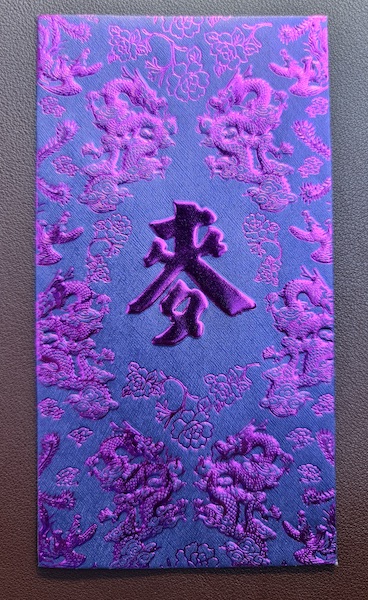 This one comes in purple with embossed dragons all around. Purple dragon symbolizes royalty and immortality, but in modern times has come to stand for romance and love. So, these packets are reserved for friends who get married or for anniversaries. 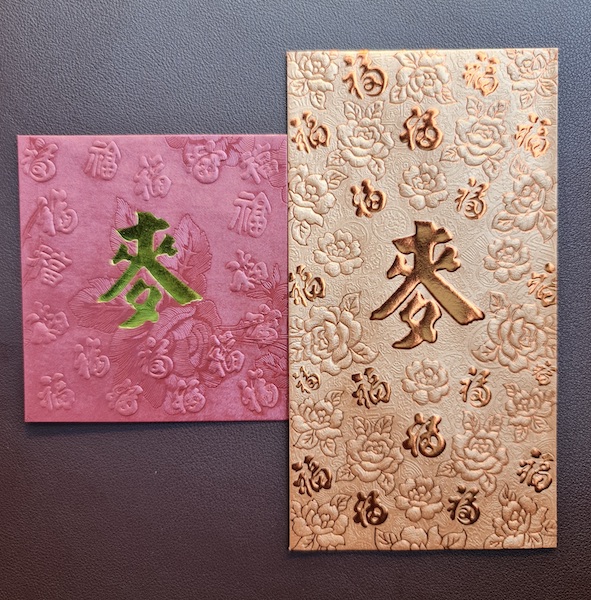 These two are elegantly designed with a hundred Fus, multiples of the character for blessings raining or falling down. These are for general use. 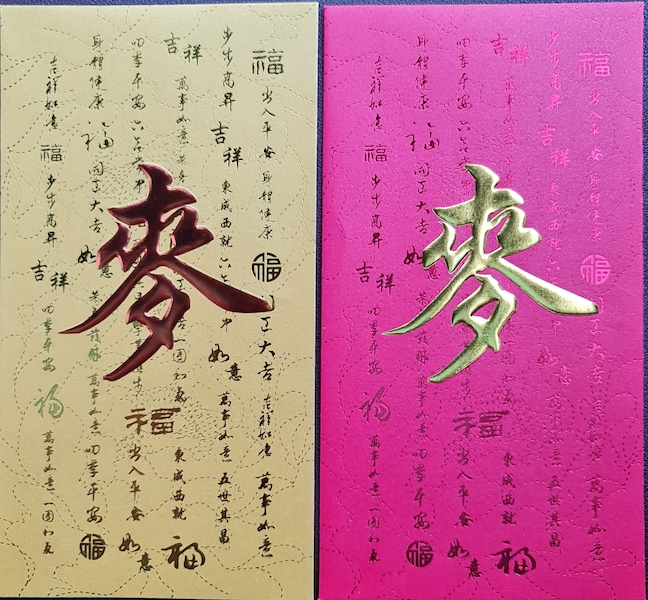 These two are my favorites because they are designed for all kinds of occasions. The vertical lines of words in the background of our surname are various idioms and are similar to the Irish Blessing, well wishes for a person set in verses.

The idioms here include blessings for safety in one’s journey; good health; good luck in all things; may everything go your way; to rise steadily; to be prosperous for five generations; success in all directions; and safety all year round.

You will be enriched in every way so that you can be generous on every occasion, and through us your generosity will result in thanksgiving to God.

The most common idioms and symbols used in the red packets all wish material wealth and abundance, luck, and success. No wonder that during Chinese New Year, the conversation always centers on how to attract “swerte.”

But the lesser known idioms show that health, peace, safety, and doing good are also significant in Chinese culture. To me, this is a good balance of the values of a people.

I am reminded of 2 Corinthians 9:11 - You will be enriched in every way so that you can be generous on every occasion, and through us your generosity will result in thanksgiving to God.  To those of us who are blessed with more, may we be reminded by it so we could give more to those in need.

Kung Hei Fat Choi to all!

What are the lucky colors that would attract wealth, fortune, stability this Year of the Water Tiger?

The second child of a Filipino and a Filipina of Chinese descent, Jane is a third generation Chinoy by definition. She is a public relations practitioner whose hobbies include tending to her small balcony garden, manually brewing coffee in the mornings, and fixing her family an alcoholic drink at night.