The National Telecommunications Commission (NTC) ordered e-commerce platforms to stop the sale of text blaster machines in their site as selling these and similar equipment is against the law.

In the show cause and cease and desist order, which was dated Oct. 11 and released on Oct. 12, the NTC said it has not authorized Facebook (Marketplace) Philippines, Lazada and Shopee the “importation, manufacture, sale/distribution, or type approval” of these equipment.

The commission also added that the sale of these types of equipment “appears to violate Act 3846” or the Radio Control Law.

Under the law, those who are authorized to purchase, possess, import and use those equipment are licensed cellular mobile telephone system operators, the National Disaster Risk Reduction & Management Council and other government agencies whose performing functions are vital to national security or safety.

The companies’ representatives were directed to appear before the NTC on Oct. 27. They were also asked to explain in writing within 15 days from receipt of the order “why they should not be liable for such violations as well as subject the violative products or equipment to confiscation and forfeiture.”

The order was made following an investigation into the emergency text blasts that some people received containing an advertisement of the late dictator’s son Bongbong Marcos’ presidential bid.

Marcos’ camp denied allegations that they are behind the alerts and claimed that the messages were a “demolition job” against him. 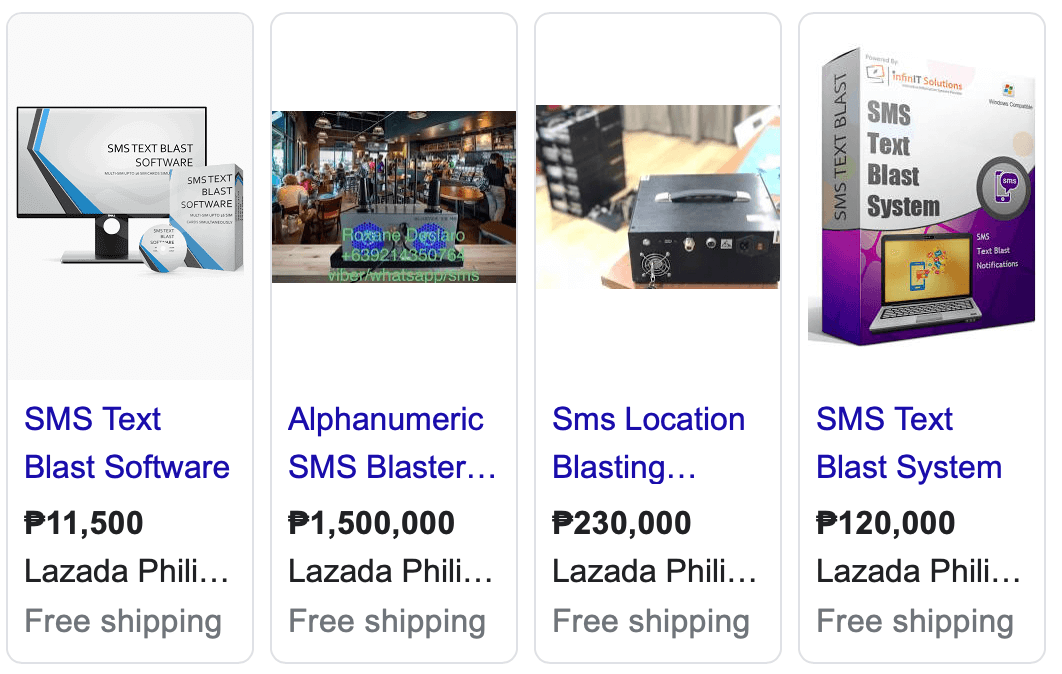 Upon doing a quick search online, Lazada’s ads of these SMS blasters still appear in the search results, with prices that range from P11,500 for a software to P1.5 million for the actual equipment.

But when you go to the e-commerce site, some of the items have already been removed, except for the software.

On Facebook Marketplace, some items are still posted as of this writing.

Meanwhile, a search in Shopee for text blasters and similar equipment did not yield any result.