A small two-bedroom apartment was all my parents could afford when we moved nearly a thousand kilometers away from our home in Manila.

I was a measly kid of six or seven, thereabouts, dark-skinned, frailer than your average tyke. I was the boy-next-door with hair shaved too close to the scalp that I felt I was the butt of jokes more than half the time in school.

I didn’t quite understand why we had to relocate to Naga City, Camarines Sur. I hated shuffling from one place to the other. While I was the type who loved to dig his roots deep in one place, I scarcely made friends in the old neighborhood. Making new ones scared the bejeezus out of me.

What's more, any chance of achieving such geniality among kids my age didn’t square with the regular displacement that went with my father’s job.

I was to learn decades later that the stranger was the commander of the armed resistance movement mushrooming in Bicol against the dictator Ferdinand E. Marcos.

The first few weeks were nowhere near a walk in the park. I, for one, had a knotty time adjusting to and learning the language, with the exception of everyday pejoratives and other inflammatory words I had picked up from kids playing in our streets.

At the Naga Parochial School, I considered it a good day when I get to hide from my teachers just so they wouldn’t call me for recitation. But being the new kid on the block helped little in parrying the attention this bunch of instructors loved to throw my way.

Back at the apartment, I hardly saw my father. He’d leave each day about an hour prior to my trip to school. He’d then arrive way past suppertime accompanied by men who were practically strangers to me and my mother.

I recall hiding behind the stairs to eavesdrop on conversations largely done in hushed tones. They donned simple clothing, and spoke in the vernacular. I scarcely paid any attention to the details of the exchanges, thinking it was probably one of those things my father and his friends were occupied with at the time.

However, I had noticed that some packed small firearms.

Even at that age, I was no stranger to weapons. I belong to a rowdy Batangueño clan to whom firearms, big and small, were as commonplace as a bottle of brandy or lambanog. So, I thought it was quite probable that they were kababayans. My dad was a Wild, Wild West kind of guy who loved to read Penny Westerns and had a few rifles and pistols stashed away in our apartment as defensive wares.

I had no inkling of what I was to discover until I noticed a peculiar pattern in the men visiting our house. They arrived at night almost by habit, sometimes way past the wee hours, and well-nigh spoke in soft tones.

On long holidays my parents would pack a virtual feast in plastic containers enough to feed a whole neighborhood. Dad would include branded medicines and milk cans and ship them off to undisclosed places at a moment’s notice. I remember seeing them load several rifles at the back of my dad’s light blue Volkswagen as part of the haul.

What was largely a stretch of easygoing weeks and months suddenly turned deathly silent.

On the frontpage of a local newspaper, there appeared a photograph of my dad’s Volkswagen shot full of holes. Hundreds of them. It looked as if it was torn to pieces. For some yet unknown reason, the vehicle was upside down. That morning, I caught sight of my mother on the telephone, weeping quietly. I tried reading the banner story as much as I could, but I couldn’t get past the first of several lines.

Later that day, I overheard mother saying that it was dad’s car on the news, and worse, that he was nowhere to be found. If memory serves, we left Naga City the next day on a train to Manila on the word of one of my uncles. At the Paco Station, we were met by strangers who escorted us back to our house in the big city.

Prior to leaving, the men assured my mother and I that dad was alive and well, and that he was holed up somewhere in the hinterlands of Bicol unscathed. He will be back, said the stranger. I was to learn decades later that the stranger was the commander of the armed resistance movement mushrooming in Bicol against the dictator Ferdinand E. Marcos.

He supported the revolution because he felt it was the right thing to do under the circumstances.

That newspaper photograph left quite a scar in my young mind. No matter how I tried, I couldn’t let go. I bore the memory of it wherever I went. It triggered a rage in me I could not explain. This much was certain: I hated everyone who wanted my father dead.

I couldn’t now recall the length of time it took for my father to return home. It could’ve been a mere month to a full year. It’s one of several blank pages in a tale riddled with holes which he brought to his grave. Harking back to the memory of those dark days led me only to that one particular humid night where he and his nameless friends buried a cache of firearms at the back of our house in Manila.

Hours later, he left. It was the eve of my 9th birthday, the late afternoon of the 21st of Sept. 1972. Around two days after his departure, Marcos announced that he was placing the whole country under martial law. The nation fell silent.

I never saw my father again until the early summer of ‘94. By then I was the father of two children. That night, in one of my choice watering holes in Quezon City, he related to me how, as a medical representative, he distributed medicine, milk and some firearms for the anti-Marcos insurgents in Bicol.  He could not risk meeting them in Manila for the simple reason that my mother’s father worked as a crony contractor for the former First Lady.

On the night they buried the cache of arms, my mother agreed to my father’s plans to go on self-imposed exile in the United States. He was a wanted man by the Philippine Constabulary, the same agency which was behind the “hit” that landed a photograph of his bullet-ridden Volkswagen on the frontpage of a local paper. It was the rebels who pulled my father out of the car just in the nick of time.

While sharing in the Communist ideology was the farthest thing from his mind, he said, he supported the revolution because he felt it was the right thing to do under the circumstances. As for the firearms, he had a whole slew of connections in the underground. 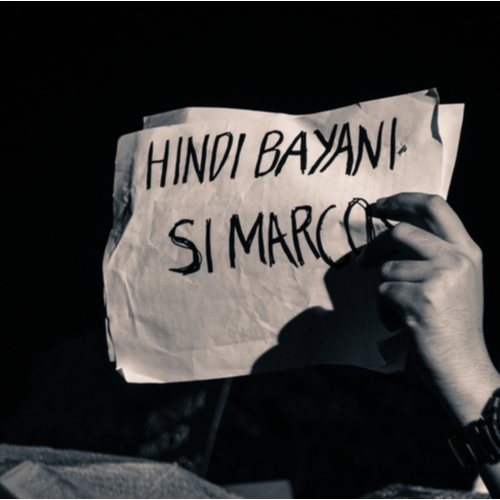 My father died of a stroke in 2008. Of all the stories he related often in the dead of night, one phrase stood out. It was the first and the last thing he said to me prior to death: Never fear to enter hell even with just a spoonful of water. Never fear power. They shit like everyone else.

I probably will never be able to tell if all the stories about my dad were true. I only have his words and the little I saw to bank on. Much of his life story had died with him. But it was that telltale photograph of my father’s car on the frontpage of a local newspaper which has remained with me to this day.

It tells me that recognizing the excesses of power sets us in a collision course against it. There’s no way out. My father did the little he can during his time. I will now have to contribute the little I can to mine. So must we all.

(Thumbnail and banner photo from Shutterstock.)

This is your sign: Japan Embassy and UK's Chevening Awards are offering scholarship opportunities