Let’s get this out of the way: Fans of Neil Gaiman’s seminal literary masterpiece The Sandman can rejoice and heave a collective sigh of relief.

This live action adaptation of Netflix is worthy of the high expectations heaped upon it, and it even exceeds them in several instances. As such, both new and old fans of Gaiman’s groundbreaking fantasy graphic novel have some things to discover and be excited about.

Hitting the newsstands in 1989, The Sandman tells the tale of Dream, one of the Endless, and his Shakespearean journey towards awakenings and redemption. The world was newer that decade, and there was nothing to compare The Sandman with in terms of breadth and scope. That it all came out of a comic book made it even more exceptional. This adaptation has gone through its own journey towards realization. And after more than 30 years, we finally have one.

If you’re new to the Sandman mythos, there are several resources out there you can read up on before diving into the Netflix series. I will try to make this review as spoiler-free as possible, knowing full well that there is nothing like experiencing The Sandman for the very first time.

What dreams may come: A primer on Netflix’s ‘The Sandman’ adaptation

The magic of modern-day filmmaking has made it possible to adapt The Sandman onto the big screen. Once regarded as “unfilmable”, The Sandman live-action series looks amazing on television. Those who have read (and re-read) the comics will surely want to watch this one on the biggest screen available, and will definitely be holding back tears of joy as the images on the pages come alive. Thankfully, the CGI does not distract from the flow of the story. Gaiman, alongside showrunner Allan Heinberg, was able to successfully translate the nuances of the stories in the comic book and make them make sense in this adaptation.

Gaiman has the experience of being a showrunner of his own material before, with the adaptation of his novel American Gods and his brilliant book with the late Terry Pratchett, Good Omens. One could argue that Gaiman was accumulating enough experience to realize what can arguably be considered as his most cherished work—The Sandman.

Thankfully, all that has served him in good stead, and it shows on this live-action adaptation. Although some changes were made to eschew the use of certain licensed DC characters (the Martian Manhunter, Jack Kirby’s Etrigan the Demon and original Sandman, et al.) and tighten up story threads, there is no doubt that when you see it on screen you will say “yes, that is The Sandman.”

Once regarded as “unfilmable”, The Sandman live-action series looks amazing on television. Those who have read (and re-read) the comics will surely want to watch this one on the biggest screen available, and will definitely be holding back tears of joy as the images on the pages come alive.

As dense and diverse the resource material was, you will get no sense of hurried plotlines to arrive at an endpoint. Every narrative is patiently drawn out, thus earning their eventual resolution. This is especially appreciated since the first season tackles the series’ first two volumes: Preludes & Nocturnes and The Doll’s House. There are 10 episodes in all, and there are enough seeds planted here to propel it towards the next seasons.

The Shaper of Forms

Much ado has been made about the series’ casting choices. Critics were particularly miffed about not having their goth-Winona-Ryder-as-Death cast, or that Lucifer is played by the towering Gwendoline Christie (Game of Thrones). Personally, I think this is borne simply out of comic fandom fetishization of said characters. Thankfully, although admittedly loud, these critics are few. And there is no reason to worry about the producers’ casting choices.

Having said that, you should expect that certain characters are given weighty roles in this live-action adaptation than their comic book counterpart. The Corinthian, played by Boyd Holbrook (Narcos), is given a bigger spotlight here and has become a major character driving the plot forward. Dream’s head librarian Lucien, who is renamed Lucienne and played by Vivienne Acheampong (The Witches), and Matthew the Raven, voiced by Patton Oswalt (Ratatouille) are given major roles here as well.

a world without dreams would be a nightmare indeed

the fantastical world of THE SANDMAN drops on Netflix in exactly 12 hours pic.twitter.com/12ixa1JVIg

All the changes that have been made here make perfect sense that you will not notice them at all as you proceed with the episodes. Even if you do notice them, they serve a necessary function that you would not mind them at all. In fact, I daresay they make the plot even tighter with these modifications. We still get the nail-biting, seat-gripping horror of  “24 Hour Diner” and “Collectors”, as well as the profundity of “The Sound of Her Wings” (easily the best episode of this season). All is well and good.

As good as this adaptation is, there are a few that I can nitpick. The soundtrack can seem a bit too gaudy at times, especially in scenes where background music is not necessary. The effects used on the form of Azazel seem comical, in both the sense that it looks like it was on the comic books and that it is unintentionally funny on screen. 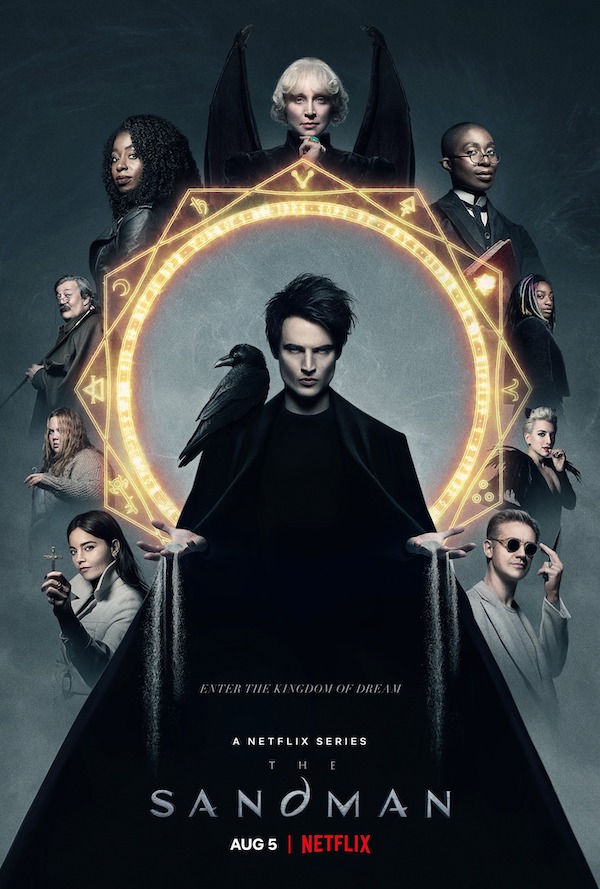 But, again, these are just nitpicks—and, all things considered, takes nothing away from the spectacle achieved by this first season. Kudos to Tom Sturridge (Irma Vep) who brings to life a believable anthropomorphic personification of Morpheus, the Dream Lord.

David Thewlis (Harry Potter and the Prisoner of Azkaban) and Charles Dance (Game of Thrones) are both casting coups who gave memorable performances in their respective roles. Then there are also the visually striking end credit animations produced by The Sandman cover illustrator Dave McKean which makes it all come full circle. All these are enough to thank our lucky stars to be alive in this day and age where dreams, and Dream, can come true.

The Sandman is now streaming exclusively on Netflix.

Mike has been a radio announcer, producer, writer, editor-in-chief and public relations consultant. He is old enough to have lived through 1980s pop culture and see it go back in fashion.