Resident Evil: Infinite Darkness is Capcom’s newest addition to its animated tie-ins, but this time it comes in series form with multiple episodes.

It is set between the events of Resident Evil 4 and Resident Evil 5 and will follow popular Resident Evil 2 protagonists Leon and Claire as they cross paths yet again years after the Raccoon City Incident, and the Harvardville Incident, now with their own occupations and accomplishments.

Resident Evil is a monster of a brand spanning across a total of 10 major games, 15 other titles, a comic book, stage plays, inspired a live-action movie run, and produced four tie-in films that we will be currently discussing.

Known as Biohazard in Japan, it is a franchise which started in 1996 and has clearly never succumbed to time and which is still going strong this year with its recent release of Resident Evil: Village. It looks like there are no plans of stopping for this monster franchise.

As Resident Evil: Infinite Darkness comes closer to spreading deadly viruses and monsters on Netflix on July 8, here are previous Resident Evil CG movies to know and watch before becoming a B.O.W.

As we all know, Screen Gems’ Resident Evil live-action films starring Milla Jovovich were not set in the same universe that the games created, Resident Evil: Degeneration was the second Resident Evil film (we will get to the first one later), albeit animated, that made sense to long-time fans of the franchise.

Resident Evil: Degeneration released in October 2008 in Japan and November in the US, it was later distributed in home media format to other parts of the world from December to January.

This was the first time where people saw Leon S. Kennedy and Claire Redfield not being moved with tank controls. Although they still were given a rough day by an outbreak inside an airport and bio-organic weapons a year after the Raccoon City Incident, it was cool seeing the two popular characters of the franchise not being retconned.

“In this animated edition of the Resident Evil saga, Claire and Leon reunite in an airport, where a T-virus-infected zombie has been set loose.” 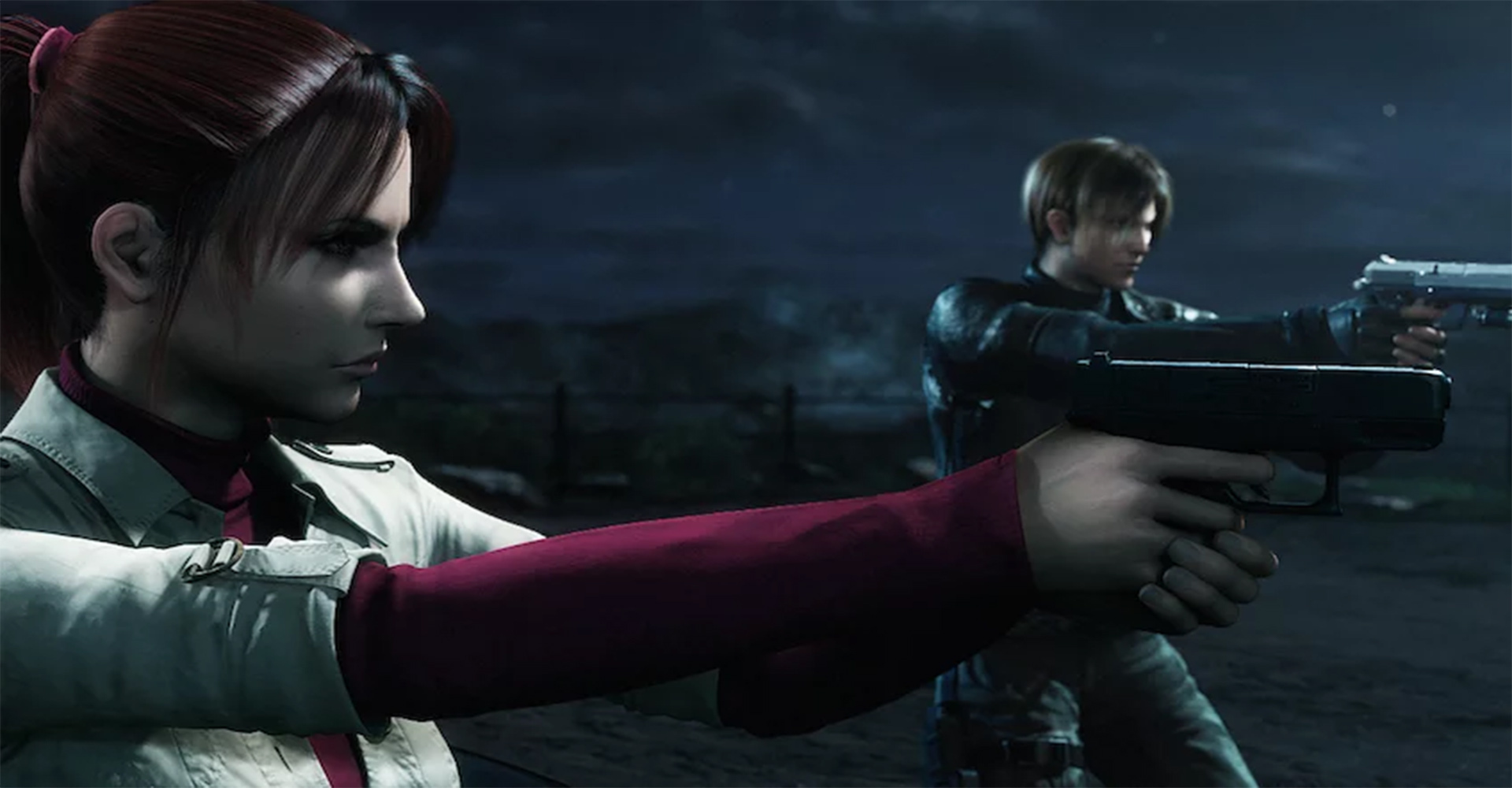 The story of how it was made is like this: Sony Pictures Entertainment, the distributor of the live-action Resident Evil films, wanted to create a full CG film version of Resident Evil.

In 2006, the film was confirmed to be in the works as Capcom joined in on Sony Pictures Entertainment's plan to create a full CG film version of Resident Evil, but the production process did not start until a year later as director Makoto Kamiya, screenwriter Shotaro Suga and Digital Frontier just joined the project.

In late 2007, seven actors flew to Japan for the shoot. Including the familiar voice of Paul Mercier, who gave the voice of Leon in Resident Evil 4 and Resident Evil: Darkside Chronicles.

Some fans may hear small clips of the soundtracks from Resident Evil 2 that were used in the film, and Japanese singer and lyricist Anna Tsuchiya sang the ending theme for the film, titled, Guilty.

Claire was not included in the game despite being a main character in the film, with Leon being the only playable character.

The game takes place in the airport and also contains enemies not seen in the film, but seen in previous games.

Even with a limited two-week / three-screen theatrical release in Japan, box office sales grossed over ¥40 million, while Rotten Tomatoes said that 67 percent of six critics positively reviewed the film, with most criticisms aimed at the plot.

Resident Evil: Damnation is the sequel to Resident Evil: Degeneration which was released on September 15, 2012 and is the third film among the four tie-in CG movies that Capcom released.

Serving as the protagonist again is the beloved Leon S. Kennedy, along with love interest and spy Ada Wong, and J.D, a rebel during the civil war in the Eastern Slav Republic.

At this time, Leon is now serving as a secret agent of the United States and has become close to the current President Adam Benford, who replaced Ashley Graham’s father after a completed term.

“Federal agent Leon pursues the deadliest evil yet in Europe, which is plagued by war and bloodthirsty bio-weapons that threaten the population.” 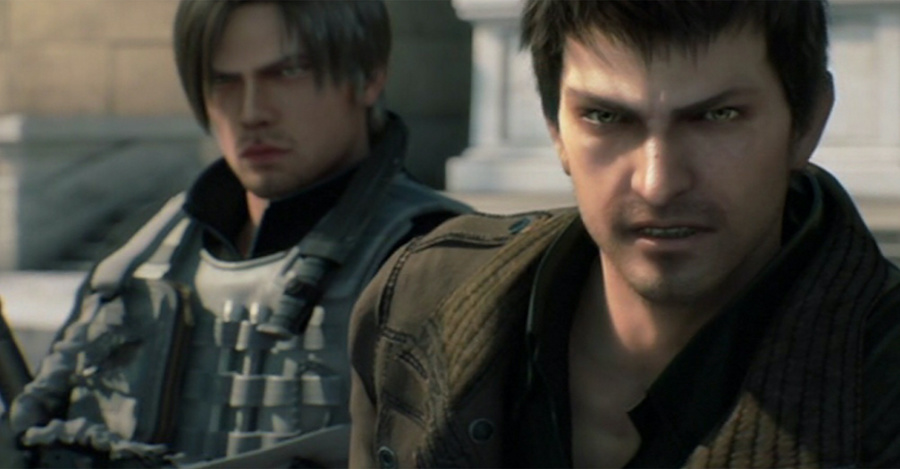 This movie serves as a tie-in prequel of Resident Evil 6 which was released on October 2, 2012, a few weeks after Resident Evil: Damnation’s premiere.

The success of Resident Evil: Degeneration in Japan’s box office in 2008 paved the way for Damnation’s creation as it piqued the interest of Sony Pictures Entertainment Japan and Capcom to do another collaboration.

Its production officially started in 2010 and mostly used motion capture and 3D animation for all of the scenes in the film, with Anna Tsuchiya again singing the ending theme for the film, titled, Carry On.

It grossed $2,325,035 at the Japanese box office, $3.3 million in home video sales in the US, and according to Rotten Tomatoes, 100 percent of its five critics gave it a positive rating with 8/10 as its average.

Resident Evil: Vendetta is Capcom’s fourth and most recent CG movie in the Resident Evil universe released on May 27, 2017 in Japan.

And yet again, returning as a protagonist is now depressed, PTSD and years of pent up survivors guilt suffering Leon S. Kennedy, who is joined by Resident Evil 1 character and Claire’s brother Chris Redfield, and former S.T.A.R.S medic Rebecca Chambers.

“In the second sequel of this animated franchise, a team of agents fight a vindictive enemy plotting to release a lethal virus into the world.” 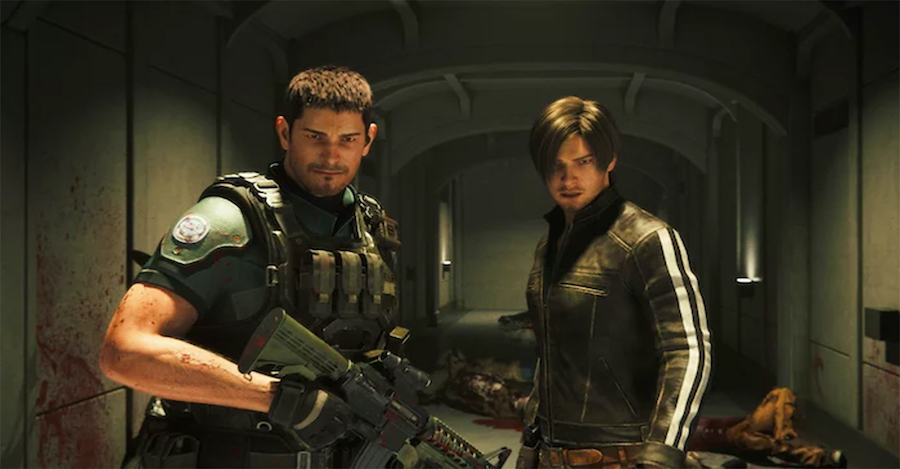 This third film is set between the events of Resident Evil 6 and Resident Evil 7 where it has been roughly around 14-19 years of encountering bio-organic weapons and monsters for Leon.

While the boulder punching Chris Redfield has been in the field for a longer time, it seems like the younger agent is taking it much harder, as he is initially shown to have been depressed and suffering from survivors guilt.

Chris, however, also eventually succumbs to the same mental health concerns before and during the events of Resident Evil 6.

The regular Sony Pictures Entertainment and Capcom tandem did not make Resident Evil: Vendetta, as a new player in Marza Animation Planet has decided to partner with Capcom to make the third installment of the CG movies.

The animation studio announced that they "decided to make a full-length CG animation movie" of the Resident Evil series, which was referred to as a "reboot" and was set to be released in 2017.

Capcom clarified the statement later, stating that it was a sequel being produced—and not a reboot—of the films.

The film also had a partnership with Ducati, where the company made a promotional video of the movie and allowed Leon to ride a Ducati XDiavel during the awesome and unforgettable climax.

According to Rotten Tomatoes, 43 percent of seven critics gave the film a positive review, with an average rating of 5.43/10, while the CG film grossed a total of $1.6 million worldwide and $1.51 million for home media format sales in the US.

Although this is Capcom’s first ever tie-in movie that is set in the same canon universe of the Resident Evil games, it is the most unique one among all four as it is a ride film that was released only in Japan in 2000. It utilizes the same theater setting and moving chairs that everyone who experienced 4D rides in arcades might be familiar with.

Biohazard 4D-Executer follows the story of the Umbrella Biohazard Countermeasure Service (U.B.C.S) mercenaries composed of Norman, Robert, Ed, Roger and their leader Claus as they rescue Dr. Cameron, a scientist of Umbrella, and retrieve the files of the company’s research which started the outbreak in Raccoon City.

The concept for Biohazard 4D-Executer was originally thought by anime director Yasuhiro Imagawa, who proposed it to Capcom. The project was then announced to the public in late October 1999, under the tentative title Biohazard 4D-Horror.

Due to the strong graphic violence depicted, shorter versions of the 20-minute film were created, from which certain scenes were cut. Biohazard 4D-Executer was previously shown on the now closed Space World and Mosaic Garden.