Marvel Studios is currently working on a Hawkeye TV show for streaming service Disney Plus and based on reports, principal filming will begin this week in New York City.

In a tweet, The Verge editor Chris Welch posted a picture of a “No Parking” notice cautioning residents and business owners of an impending TV shoot. The announcement features the working title for the Hawkeye series, “Anchor Point” and says that production is scheduled to take place at downtown Brooklyn on Dec. 2. 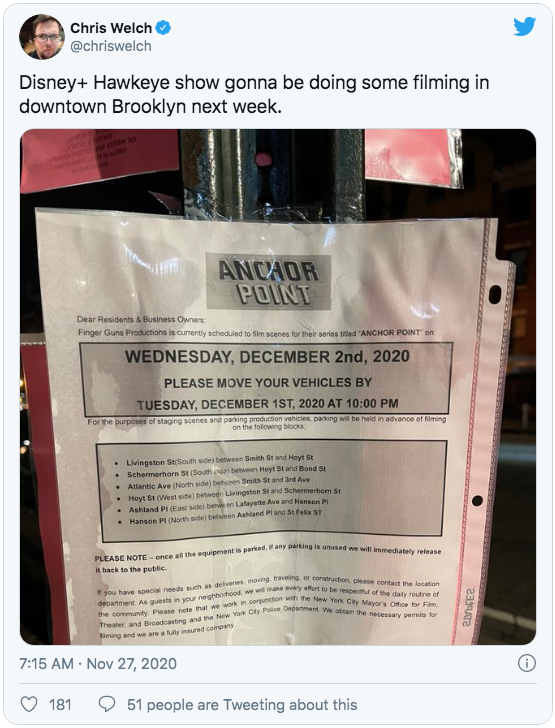 Amber Finlayson, Katie Ellwood and Rhys Thomas have been hired to helm some episodes of its upcoming Disney Plus Hawkeye series.

In the show, Jeremy Renner will reprise his role as Clint Barton a.k.a. Hawkeye who will begin training young hero Kate Bishop to become a warrior. In the comics, Kate is a member of the Young Avengers who has a high level of skill in archery, sword fighting, and unarmed combat.

While in combat, Kate carries two battle staves similar to those once used by Mockingbird, a sword similar to the Swordsman's, as well as Clint Barton's bow and arrows. Actress Hailee Steinfeld is widely rumored to be playing Kate, but the studio has yet to confirm this.

No details have surfaced so far about the storyline of the series but fans are hoping that the show draws from the critically acclaimed Hawkeye comics created by Matt Fraction and David Aja from 2012 to 2016.

Hawkeye is scheduled to stream on Disney Plus in 2021.