Style Living Self Celebrity Geeky News and Views
In the Paper Shop Hello! Create with us
Glorietta

New and old fans alike can relive the memories of the hit songs by the four-member British band by visiting an ongoing Beatles exhibit in the metro. Marvel at authentic memorabilia from the quartet’s hit songs like Here Comes the Sun, Hey Jude, and Ob-La-Di, Ob-La-Da.

🎵🎶 Here comes the sun doodoodoo oooh, and I say… visit this exhibit #HereAtGlorietta!

Drop by with a little help from your friends! Catch the Beatles exhibit and enjoy this personal collection of the Steve O’Neal Productions.
📍 Palm Drive Activity Center
📅 Until August 17 pic.twitter.com/dHNXdaLY4J

Love The Beatles? A university in Liverpool is offering a master’s degree on the legendary group

Steve O’ Neal Productions recently set up an exhibition on The Beatles displaying a personal collection at the Palm Drive Activity Center in Glorietta 2, Makati. As stated on the production’s Facebook post, the pop-up mall exhibit will run from August 4 until August 17.

The exhibit entitled The Yellow Submarine features the band’s history from the year they were formed in 1960 to the year when they disbanded in 1970, at the peak of the band’s popularity.

On one side of the display, fans can get an up-close look at original photos from the movies, concert tickets when they performed in Manila, newspaper clippings of the Daily Mirror’s special issue on John Lennon’s death, and a photo with the band’s former drummer Pete Best.

The framed vintage items on display include the 1965 movie poster for Help! directed by Richard Lester and tickets priced at P30.00 for the concert that was held at the Rizal Memorial Football Stadium Manila in July 4, 1966.

The exhibit's back wall also displays John Lennon’s lithograph collection, which mostly depicted his relationship with his wife, Yoko Ono. According to Sotheby's, one of the four lithographs illustrates the couple's wedding ceremony, which came from Lennon’s Bag One series.

On the Sotheby’s website, Lennon was quoted saying that he pursued drawing because The Beatles were determined to be themselves, and he could no longer continue to stand still. 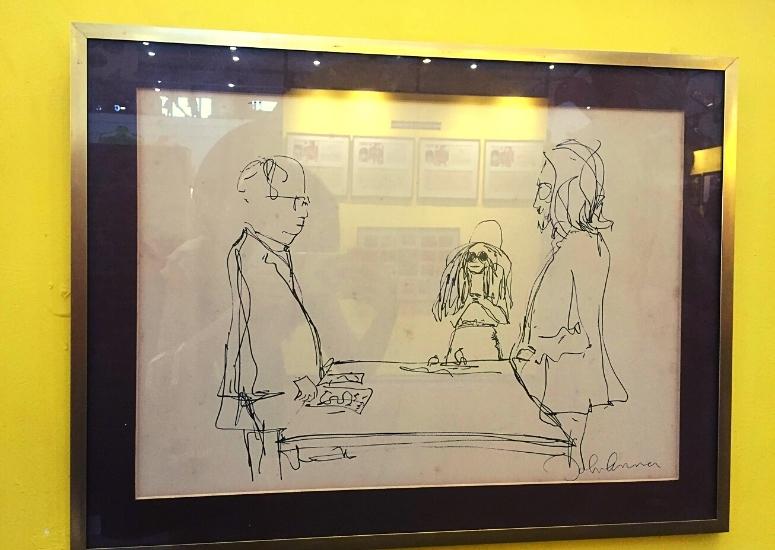 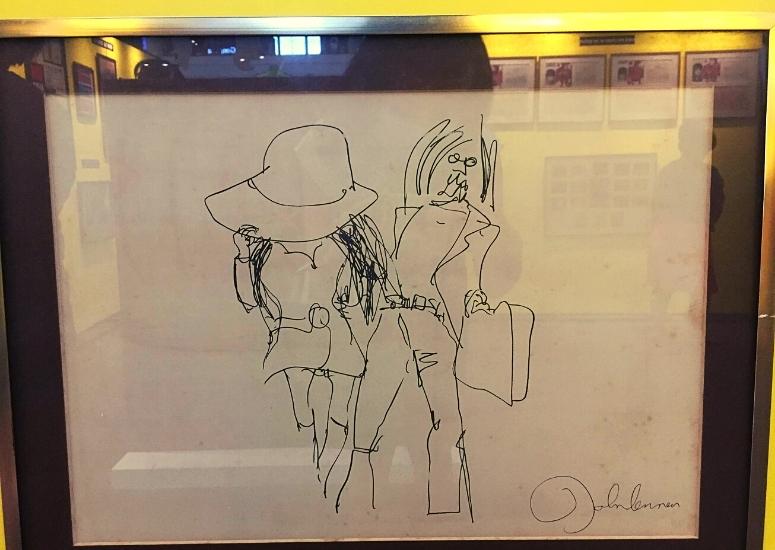 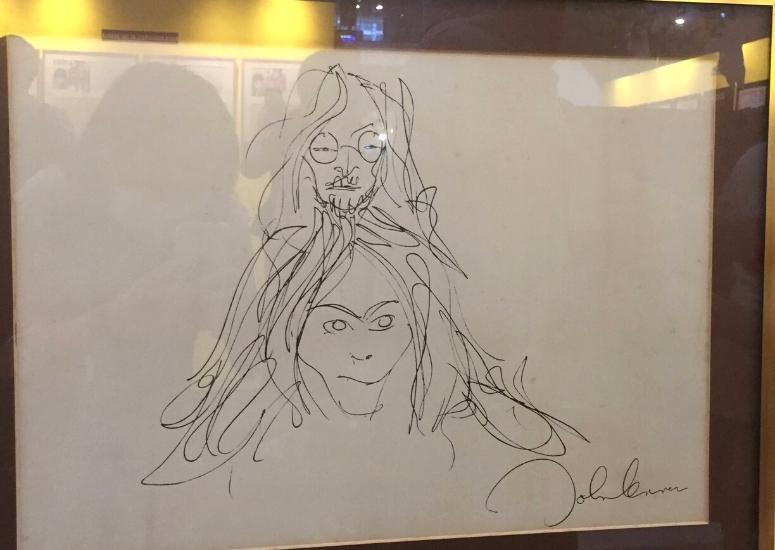 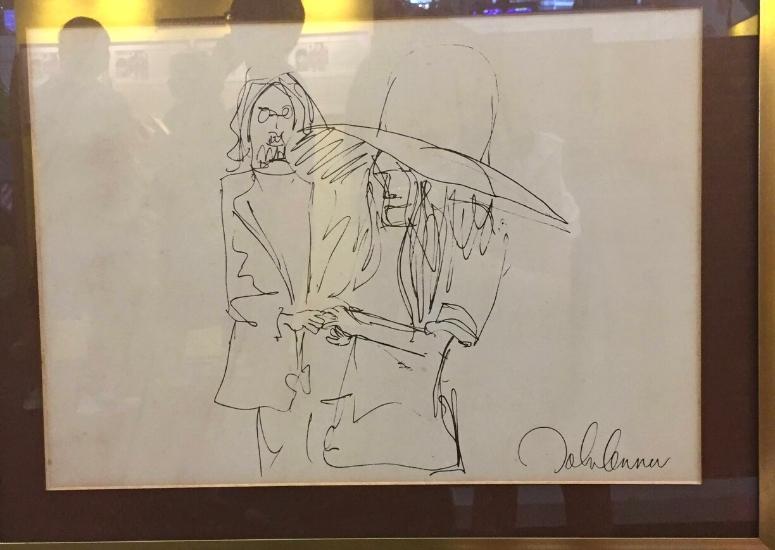 Although it was not included in the production’s social media posts, the Original Lyrics Sheets to Lennon’s (Just Like) Starting Over, Instant Karma! (We All Shine On) with Yoko Ono, Beautiful Boy, and The Beatles' Lucy In The Sky With Diamonds and Day Tripper are also showcased at the pop-up exhibit. 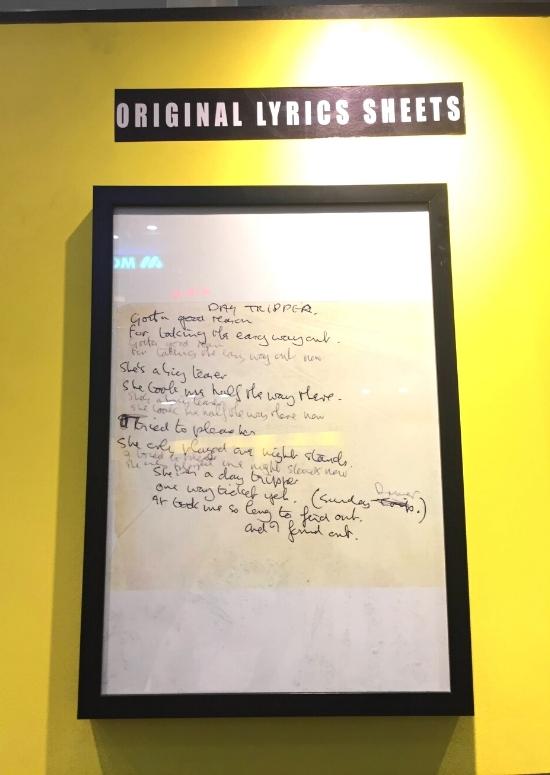 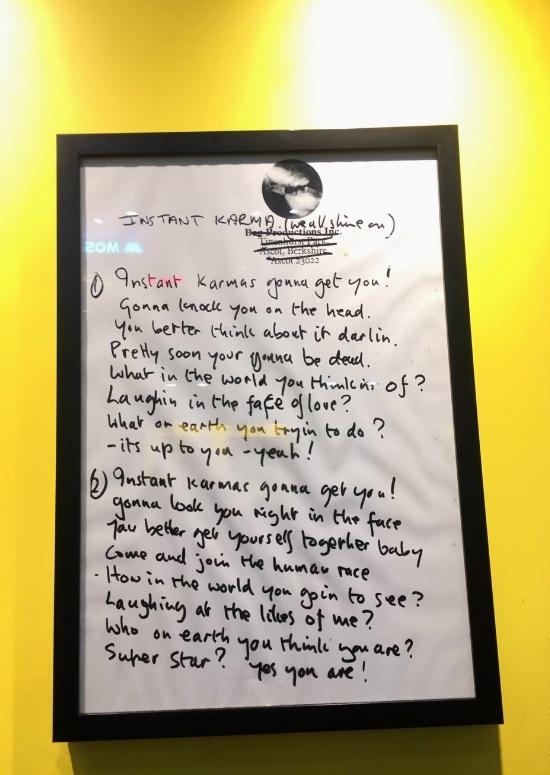 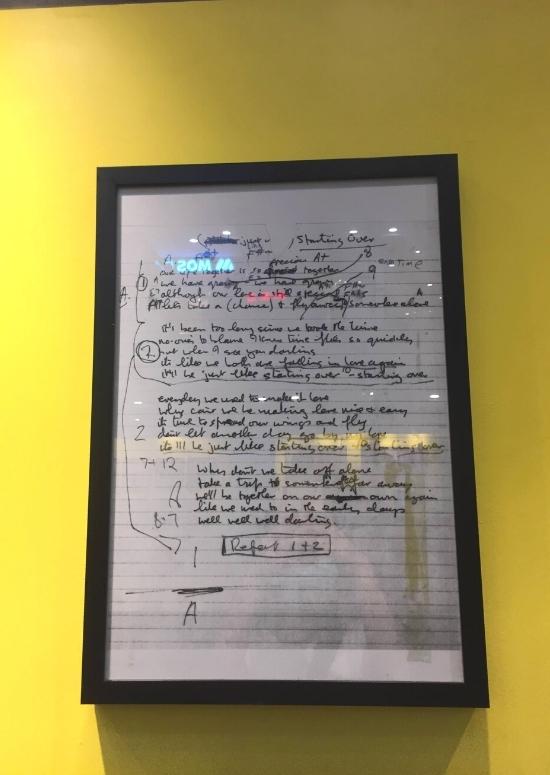 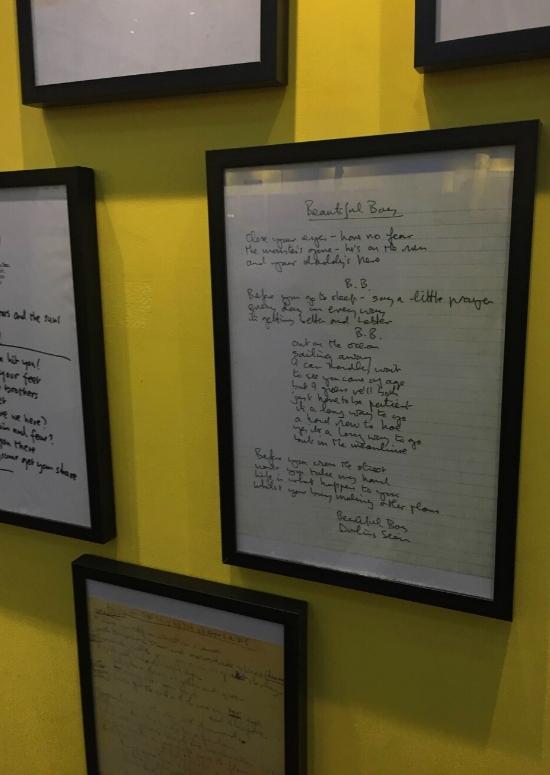 Visitors can also get a close-up look at the details of the band's original lyrics sheets. You can tell the lyrics sheet was the original paper the lyrics were written on because of the hurried penmanship, lines, and arrows, and even the paper from the Tittenhurst Park mansion in Ascot where Lennon lived for two years, an article from the BBC reported.

Of course, a Beatles exhibit would be incomplete without showcasing the band’s discography. Below is the Singles Print Collection Series 1 featuring the cover art for the band’s single tracks.

If there were any unforgettable outfits the band wore during their entire music career, it would be the Sgt. Pepper’s Lonely Hearts Club Band uniform which took inspiration from the “Edwardian and military ideals” as written in the National Army Museum located in Chelsea, London.

Steve O’ Neal Productions also brought the iconic Abbey Road to Glorietta with a photo backdrop. Mallgoers who drop by can recreate their own Beatles “walking pose” seen on the album cover.

The Abbey Road crossing is a landmark to The Beatles fans as George Harison, Paul McCartney, Ringo Starr, and John Lennon used this for their famous album cover first issued on September 26, 1969.

Peter Jackson restores 50-year old docu footage for ‘The Beatles: Get Back’ on Disney Plus

Mia is a journalism major whose spare time consists of watching Netflix, crocheting, or consuming K-pop content when she's not busy running after 11:59 pm deadlines.