2020 has been a strange and difficult year for Philippine cinema.

The year was supposed to be marked with a number of potential blockbusters, following the record-breaking performance of movies such as Star Cinema’s "Hello, Love, Goodbye" and Viva Films’ local adaptation of "Miracle in Cell No. 7 in 2019."

But the COVID-19 pandemic forced cinemas to close for most of the year, prompting local movie movie companies to look for other ways to screen their products and make money.

The pandemic allowed many movie companies to explore creating content for the internet. Powerhouses such as ABS-CBN Films, Regal Films, Globe Studios, and The IdeaFirst Company joined the Asian Boys Love fever by producing their own BL shows, screened for free on YouTube.

What should have been 2020 theatrical features—such as the Alex Gonzaga-Xian Lim starrer "Love the Way U Lie" and the romantic-comedy "Alter Me"—became Netflix releases.

ABS-CBN also released a number of movies via its online streaming services iWantTFC and KTX.

It’s hard to guess when the majority of cinemas in the country will resume operations (cinemas have opened in areas where lockdown restrictions have eased). And it’s even harder to assume if moviegoers will flock movie theaters again when they do fully open.

Nonetheless, a number of local movie companies have resumed production of films set for release in 2021.

We can probably expect films originally slated for this year to be released in 2021.

For instance: Lav Diaz’s "Servando Magdamag", produced by ABS-CBN’s Black Sheep, started filming earlier this year, although there is no update on whether they have already finished production. Based on the acclaimed short story written by Ricky lee, the film is supposed to be John Lloyd Cruz’s big comeback after his two-year showbiz hiatus. Erik Matti also announced in a Facebook post that they have wrapped up filming for "On The Job 2: The Missing 8", the sequel to the acclaimed 2013 crime drama "On The Job". While Matti has yet to announce when or where the film will be released, a clip of "On The Job 2" can be seen in the teaser of upcoming films to be streamed on the new local video on demand service Upstream.

Here are five other films to watch out for in 2021:

Even before the BL series "Hello, Stranger" ended its run in August, its producer Black Sheep already announced that a movie sequel based on the show is in the works.

Not much is known what the movie sequel will be about, though we can assume it will continue the story of Xavier (Tony Labrusca) and Mico (JC Alcantara), two young men who admitted their romantic feelings for each other at the end of the series. Black Sheep announced via a social media post that filming for the movie finished in December. "Hello, Stranger: The Movie" is directed by Dwein Baltazar. 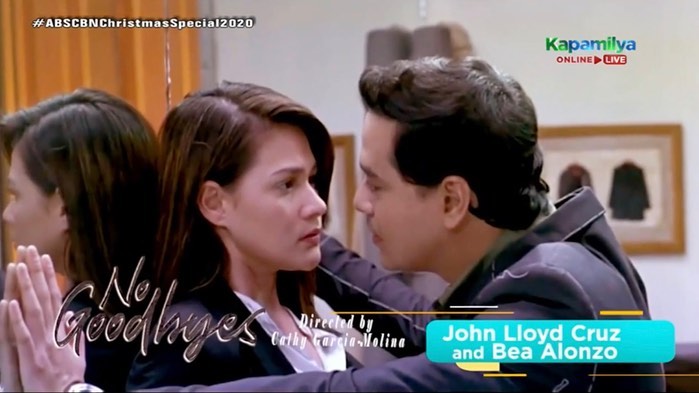 It seems like 2021 will be a big year for Bea Alonzo, who recently left her long-time talent agency Star Magic.

During the ABS-CBN Christmas Special 2020, it was announced that Bea will star in a movie titled “No Goodbyes” with perennial screen partner John Lloyd Cruz. The movie will be directed by Cathy Garcia-Molina.

If the movie pushes through, it will be Bea and John Lloyd’s long-awaited reunion project. They were last seen together in a movie in the 2015 hit romance-drama "A Second Chance", the sequel to their iconic 2008 movie "One More Chance".

It was also announced earlier this month that Bea is slated to star in the local remake of the 2004 South Korean movie "A Moment To Remember" with Alden Richards.

The lockdown has turned Paolo Contis into a leading man—thanks to his 2018 movies "Through Night and Day" and "Ang Pangarap Kong Holdap" which became hits on Netflix Philippines.

Paolo is following through the renewed interest in his movies with "The Faroe Way Land", a movie filmed in Denmark in November.

JP Habac was best known before this year as the director of the 2017 romantic movie “I’m Drunk, I Love You.”

After a few years of absence in the movie scene, Habac came to prominence again in 2020, thanks to Globe Studios’ hit BL series "Gaya Sa Pelikula".

Now, he returns to directing movies via the romance movie “Dito at Doon,” starring JC Santos and Janine Gutierrez.

Its producer TBA Studios hasn’t revealed much about the movie, though it is expected to be released early 2021. It is also an exciting project, as the movie comes after Janine’s Gawad Urian win for her role in the movie "Babae at Baril".

“Pakihanda po ang mga puso,” TBA Studios tweets, which might be an indication that, like “I’m Drunk, I Love You,” their upcoming movie will also be a heartbreaker.

"Kita Kita" earned more than P300 million at the box-office, so it will be interesting to see if Alessandra and Empoy can replicate their 2017 success in "Walang KaParis".