If you were looking for Japanese characters, a group of three to four individuals, doing heists while often one-upping each other, the new Netflix Lupin series is NOT it.

If you’re a bit confused, come and be literary geeky with me for a bit. This needs to be done, in order to fully appreciate the incredible and intelligent new series that dropped on Netflix, as you watch it.

First, the surname is pronounced “Lu-PAN”, not “Lu-pin”. Even the Japanese character is properly pronounced this way, but whatever happened during Filipino translation of the anime, it’s too late now to change.

Arsène Lupin is the creation of Maurice Leblanc. Lupin first made his debut in 1905, in the short story The Arrest of Arsène Lupin. There are 17 novels and 24 compilations of novellas and short stories, made from 1905 to 1939, with a good number available in English translation. Many of the English translations by Alexander Teixeira de Mattos have lapsed into public domain and are available for free online in places such as Project Gutenberg.

Lupin was created as a French response to Sherlock Holmes (by Sir Arthur Conan Doyle), a character somewhat intentionally created to be a contrast to Holmes being so serious and straitlaced (there are actually several short stories and novels where Lupin faces a version of Sherlock Holmes).

Thus, Lupin was a "gentleman burglar" or "gentleman thief," someone who steals from those who deserve stealing from, and doing so by being classy and suave, as a master of disguise who rarely takes himself seriously.

The fun in the Arsène Lupin books is different from the Holmes books, where the excitement is in catching the criminal along with Holmes, as Watson narrates how it’s solved. The Lupin stories and books feel like an early iteration of Where’s Waldo, and one of the early usages of unreliable narration: guess while you are reading who is Arsène Lupin, because he could be any of several characters: the handsome young prince, the suave businessman, the rising new detective.

There is also a twist in the typical detective story: early on you are made aware that Lupin likely did the robbery, but read along to find out how he did it, despite expected as well as unusual odds. You want to see Lupin succeed in fooling the police, or a powerful but evil personality, or a dangerous killer. The writing is generally fast-paced, often at par with current page-turners, and the stories are thus highly readable even in this new century.

In the way that Sherlock Holmes got an immense following and fandom in England and English-speaking regions, Arsène Lupin rose in popularity in France, French-speaking regions, and in English translation. In the way that Holmes developed an iconograph as a tall detective wearing a deerstalker cap and smoking a pipe, the Arsene Lupin iconograph became the gentleman thief wearing a top hat and monocle and carrying a cane, which is presented in this Netflix series.

The gentleman thief profile may be more familiar to Filipinos in the phantom thief character found in several manga, anime, and games—a suave masked man wearing a top hat and fleeing from windows. The fact that Japan has so many phantom thief characters (such as Sailor Moon’s Tuxedo Mask and Detective Conan’s rival Kaito Kid) is because of Arsène Lupin. Both Sherlock Holmes and the original Arsène Lupin stories were and are popular there, inspiring generations of characters.

Filipinos are most familiar with the manga and anime character created by Monkey Punch (Kazuhiko Kato), Arsène Lupin III, created as the grandson of the original Lupin.

The Maurice Leblanc estate did not authorize this. But as the original Lupin stories lapsed into public domain, the existence of the Japanese character is tolerated, and Lupin III is a well-loved cultural icon now.

We best know his posse composed of Goemon, Jigen, and Fujiko; and his yellow car; through the several seasons of its anime, dubbed and aired on GMA during the 1990’s to early 2000s. The most recent creation in the franchise is Lupin III: The First, a CGI animation triumph of a film, released here as well in late 2019. There was also a 2007 live drama series on GMA about an imagined Lupin, starring Richard Gutierrez.

My introduction to Arsène Lupin is through the French-Canadian series Night Hood, which aired on local cable TV in the 1990’s. This series has original recurring characters that know Lupin, and original stories unrelated to the books but referencing them sometimes. Lupin in these stories is semi-retired, but sometimes has to rescue a journalist friend, as well as defeat the plans of an evil industrialist and arms manufacturer. Episodes may still be available on YouTube.

As a French production, Netflix’s new series Lupin: Dans L’ombre d’Arsène references the original Arsène Lupin, the original gentleman thief. The first five episodes were given on Jan. 8, 2020, with a confirmed second part on the way.

Okay. Now that you have that background, let’s talk about the new series. 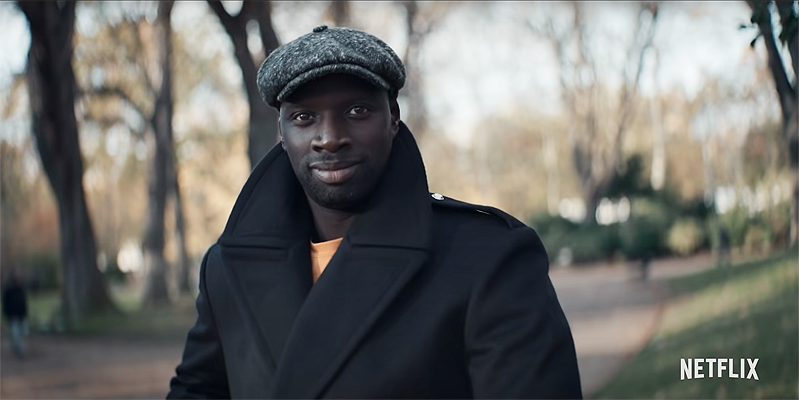 Initially the Netflix series presents itself like the Lupin version of the BBC's Sherlock, a modern retelling of the books and concepts, with a modern version of the familiar characters. But within the first episode, you are quickly corrected.

(SPOILER WARNING for those who haven't seen the series yet)

We are introduced to Assane Diop (Omar Sy, who was in X-Men: Days of Future Past, Jurassic World, and Transformers: The Last Knight), an original character, an immigrant from Senegal as a teenager, who on introduction works as a janitor in the Louvre (the museum with the Mona Lisa). The museum would hold an auction of The Queen’s Necklace, currently in the hands of a business tycoon with powerful connections.

But Assane is much more than he presents himself as: more than a basic Lupin fanboy, he lives and breathes the Lupin stories. He uses them as inspiration to be a modern gentleman thief, having now amassed the abilities and capacity to be such. He is on a mission to exact revenge, against the family his father served, and the man who framed his father.

The series starts with him planning to steal the historic Queen’s Necklace. However, fiction is different from the real world, and Assane is a human sometimes blinded by his need for revenge, while trying to patch up his rocky relationship with his wife and son.

The story alternates between the past and the present, explaining in this way how Assane turned into the person he is, and the events leading to his father’s death. (Content warning: suicide is mentioned in practically every episode of this series. Hanging is sometimes directly presented.) It also does timeskips to explain how the heists were pulled off. The revenge tale overarches the whole narrative, and then there are individual heists and chases within each episode.

Similar to Sherlock, this series drops a lot of Easter eggs for the diehard and semi-diehard fans. Code names “Luis Perenna” and “Paul Sernine” are official anagram names used in the Lupin stories, for example. Important locations such as the Hollow Needle (the Needle of Etretat, an actual location and tourist attraction) are presented. The titles of the most famous books and stories are given along the narrative. 813 is one of the most well-known novels, one of the most complicated and heart-wrenching cases Lupin had to face.

(The) series wisely and bravely addresses discrimination on several levels: racism against those of African descent, classicism against the poor, anti-migrant discrimination, the cruelty of the prison system. There is painful honesty in the material.

The twist: this series knows that it is dropping Easter eggs. Lupin and the book series remain concepts and books. There is no living, breathing, Lupin, so far. All the characters and the whole story are original to this series, merely getting inspirations from the books.

Assane, even while his name intentionally sounds close to Arsène, is his own person, trying to imitate the Arsène Lupin character. It seems like it is a story of a personal and emotional tug-of-war within Assane, the dangers of seeking revenge, as well as being consumed by a need to match an ideal.

Therefore, while it helps to know and understand these names and titles and their significance, knowing the Arsene Lupin lore is not required. The material will explain itself when needed, tongue-in-cheek, as people sneer at the detective following Assane, who sees a pattern of Lupin lore.

Along the way, this series wisely and bravely addresses discrimination on several levels: racism against those of African descent, classicism against the poor, anti-migrant discrimination, the cruelty of the prison system. There is painful honesty in the material. You are clearly aware that there has been input from the main actor and artistic producer Omar Sy, who grew up poor and an immigrant.

The cruelty of the rich and powerful, and the racially empowered, is given with minimal restraint. Assane even uses these micro- and macroaggressions to his advantage, hoodwinking people without remorse. This is done apart from the reference material, and this dimension is well added as a strong point of the series.

The slight-of-hand aspect of this entire series is handled incredibly well, a combination of the work of Killing Eve director George Kay and Family Business director François Uzan as producers and head writers, and Now You See Me director Louis Leterrier as one of the writers and directors.

The heists are generally convincing and understandable once they are explained, never being absurdly contrived nor too easy. Some of the heists are inspired by the original stories, but their execution and updating for modern technology are original to the series. There are some weak points already noted by other viewers, but these are few.

Lead actor Omar Sy carries this series masterfully on his tall and broad shoulders. He brings an awareness of both disenfranchised and powerful characters into the disguises and the acting. Therefore how he blends into the characters he plays feels convincing, no matter what spectrum of the social stratum he does, similar to Lupin.

Assane sauntering into a room in a well-pressed suit is as real as Assane stepping into a prison cell. While it is sometimes hard to believe that a man that tall would be forgettable to people, as is mentioned a few times, the conceit that he is unremarkable is sufficiently credible.

Overall, the Lupin series is already receiving international buzz and online rave reviews, as a heist series that feels both unique and familiar, while reviewers especially from America scramble and stumble to know more and better about the source material.

I hope this has given you a little better understanding into a semi-forgotten classic series that deserves more attention into the new decade, and that it helps you enjoy a well-constructed new story of revenge and possible redemption.

Janine Gutierrez makes ABS-CBN debut: ‘I’m happy that everything has fallen into place’

‘What is that commercial?’: Ellen DeGeneres gets confused by viral RC Cola ad

The tyranny of vaccines: Orphans, kings, and revolutions