Creating deepfake videos has never been easier. Nowadays, there are a lot of apps online that let you swap your face on anyone's video within seconds, and most of the time, the results look authentic.

As of writing, the AI video editing app Tempo tops the Google Play charts in the Philippines, and Filipinos are using it to put their faces on popular TikTok videos.

While the app is used mainly for fun and memes, do deepfakes pose a threat in cyberspace? In the past, we've seen deepfakes used for malicious purposes like to spread misinformation or to attack someone's reputation.

"As with any technology, risks are created with how technology is used. Technology on its own—even deepfake technology—is neutral. It's users that create scenarios that can be good or bad," he said.

He also highlighted the privacy issues that come with apps like Tempo where you upload images of your faces. 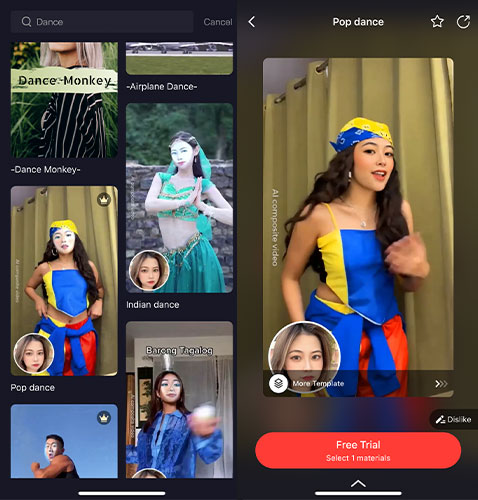 "Our faces, and the images of our faces (e.g., on ID cards or biometric captures for unlocking PCs or doors), constitute personal identifiable information, or PII. as such, the misuse of our PII can be construed as a violation of the Data Privacy Act."

But what about people whose likeness and original content are being used in deepfakes, what kind of risks do they face?

Let's use actress Andrea Brillantes' viral TikTok dance as an example. It has become a video template in Tempo, and it's become popular among users online to swap their faces onto it.

"The general rule naman talaga is that the use of anyone's anything without permission is bad," Galla said. "Such acts can constitute, at the very least, intellectual property rights violations, all the way to the worst, fraud."

"If it's an intellectual property violation, we can get help from the Intellectual Property Office—for instance, use of my face without permission, for commercial purposes—or the National Bureau of Investigation and Philippine National Police Anti-Cybercrime Group (PNP-ACG) if it was used for fraudulent or other criminal purposes.

And with the national elections coming in 2022, could easily accessible deepfake editor apps stir trouble?

"We've been monitoring this since the mid-term election, so far we haven't seen it used to a broad effect," shared Ethics PH founder and Philippine Center for Investigative Journalism board member Dominic Ligot.

"It's certainly a possibility, but right now the likely use is for satire and harassment," he said.

Galla added that it could be a big concern in the elections. "It's just another tool that can be used for clean campaigns or black propaganda both."

Deepfakes aren't illegal in the Philippines, but the PNP-ACG says they may breach data protection law depending on its content.