Netflix catalogues the blindingly bad events from a year whose very name promised us perfect vision.

It’s a sign of how strange this year really was that in Charlie Brooker’s mockumentary special on Netflix, Death to 2020, they show clips from a TV reality series called Floor Is Lava, in which contestants must face challenges or else sink into a boiling pit of lava. And you just think it’s a parody of how crazy our entertainment choices had become during lockdown. But then — surprise! —turns out it’s an actual show. On Netflix.

In lieu of a new season of Black Mirror, the dark futurist/satirist Brooker just dropped this 70-minute look back on 2020, lampooning a year that already managed to be a lampoon of every disaster movie, dystopian nightmare and horror flick… also shown on Netflix.

Now that we’re at a safe distance, a week or so into 2021, you may possibly wish to blot out any memory of the wretched blur that was 2020. Who wouldn’t? Even Samuel L. Jackson, asked by a disembodied voiceover to look back at the past year, snorts and says (as only Samuel L. Jackson can), “Why in the **** would you want to do that?”

But it helps, looking back. The jokes may be spotty, but sometimes they’re spot-on. With fake “expert” commentary from Hugh Grant, Lisa Kudrow, Kumail Nanjiani, Leslie Jones, Joe Keery and Cristin Milioti, it covers many of the blindingly bad events from a year whose very name promised us perfect vision.

In lieu of a new season of Black Mirror, the dark futurist/satirist Brooker just dropped this 70-minute look back on 2020, lampooning a year that already managed to be a lampoon of every disaster movie, dystopian nightmare and horror flick… also shown on Netflix.

It starts with a climate change summit at Davos in January (“basically, Coachella for billionaires,” as Jackson puts it) where 16-year-old Greta Thunberg shames the world into talking about global warming. “She’s this teenage girl who became famous, even though everything she says is depressing,” says Jackson, “kind of like Billie Eilish.” Over in England, where Brooker’s from, there was a farcical Brexit and the exodus of Harry and Meghan Markle to the US. As the Queen (played by Tracey Ullman) dryly puts it, they wanted to get away from the “prejudice” in Britain, “which is why they moved to America, where race has never been an issue at all.”

Elsewhere, the Oscars stayed very, very white, and Trump skated through a fast-pass impeachment trial. But all of it was overshadowed by COVID-19, the prevailing bummer of the year. Brooker can’t really satirize a virus, so he has to poke fun at our reactions to it.

Kudrow is good as a blonde talking head whose go-to line (“I choose not to believe that”) is a summary of how the very idea of “truth” took a nasty beating in 2020. Grant gets laughs as alcoholic historian Tennyson Foss, mixing up real life with scenes from Star Wars and Game of Thrones.

But it’s perhaps Jones as a behavioral psychologist who pinpoints how polarized people became while stuck inside all year, doomscrolling: “On the right, you got extremists wondering aloud whether Hitler was all bad, inventing their own clown-house reality; and on the left, you got whiney woke-lords, cancelling the s**t out of everyone.” 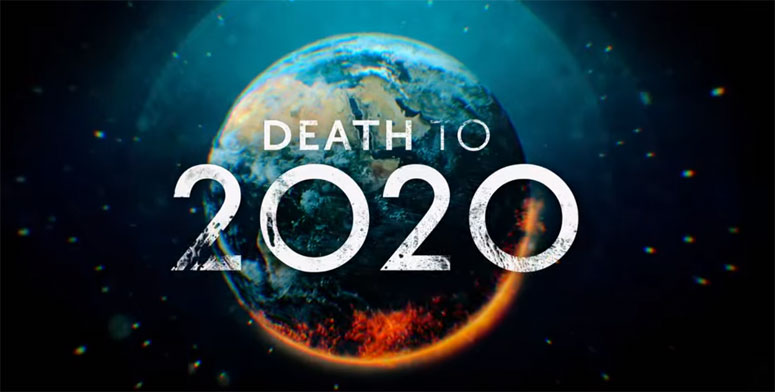 The writers of Death to 2020 go after millennials who suddenly got “woke” to the fact that Black lives exist after George Floyd’s murder, Silicon Valley types who got insanely richer, and white women who went viral after calling the cops on Black people for basically doing anything.

Amid all this is a lot of actual footage — of deserted London streets that remind us of zombie flick 28 Days Later, but for real; or of shambolic, lying politicians who risked making us no longer take our leaders seriously ever again. (Just kidding. We were already there before 2020. The Who even wrote a song about it.)

There are, imbedded within Death to 2020’s lesser gags, some serious points about media and our reactions to it — this is Brooker’s main wheelhouse, of course — but to parse all this too deeply would defeat the purpose.

So did the world actually need Charlie Brooker to give us his “react video” to 2020? Maybe not. But any chuckles we can squeeze out of this past year are welcome, nonetheless.