Style Living Self Celebrity Geeky News and Views
In the Paper BrandedUp Hello! Create with us
A24

As netizens online said after the Academy Awards nominations were announced, "It's about damn time."

This excitement over the 95th Oscars was channeled toward Michelle Yeoh, as the Everything Everywhere All At Once (EEAAO) star became the first person who identifies as Asian to be nominated for Best Actress. Technically, the first lead actress nominee was Merle Oberon in 1993 for The Dark Angel, but she hid her partial Sri Lankan ancestry.

This was the 60-year-old Malaysian actress' first Oscar nomination, and her co-stars in the multiverse film Ke Huy Quan, Stephanie Hsu, and Jamie Lee Curtis were also given nods by the Awards body.

2023 Oscar nominations: Full list of nominees, including 'Everything Everywhere All at Once,' 'Triangle of Sadness,' 'Avatar: The Way of Water'

Yeoh's fellow actors and users online alike shared their excitement over the actress' achievement after the Oscar nominations announcement.

"This is your moment, take it!" wrote Golden Globe Award-winning actress Halle Berry on Instagram Stories. 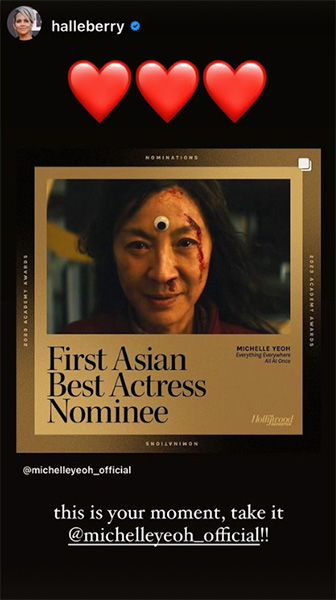 In an interview with GQ, Crazy Rich Asians co-star Henry Golding said "it's about time."

"Michelle Yeoh is an absolute living legend and I think she really represents many generations of filmmakers and actors...She's only going to grow from here. And to be honest, I think this is going to be her year," the actor added.

"Michelle Yeoh is 60. She started her career in approx 1983. It is 2023. She has been working SO F**KING HARD AT HER DREAMS. Let that be a testament that you might be able to be Best Actress one day. Michelle Yeoh also deserves a lot of rest, flowers, snacks, and vacations," The Politician actor Theo Germaine tweeted.

"Soaring so high and so bright," said Simu Liu, who starred alongside Yeoh in Marvel Studios' Shang-Chi. 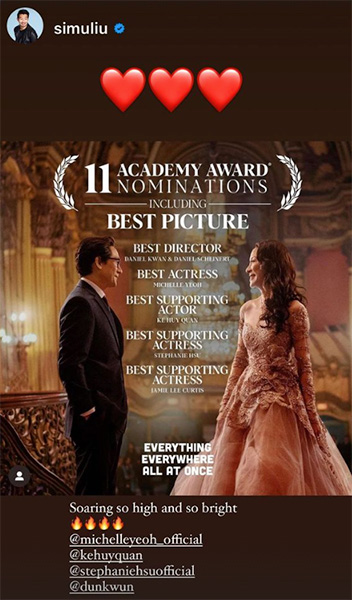 On her Academy Awards recognition, Yeoh wrote about how grateful she is and overjoyed on Instagram.

"I am overwhelmed and overjoyed with happiness! Every single person who worked on this film poured their heart and soul into it, and we are all so grateful to the Academy for recognizing so many from our EEAAO family," she said.

"Playing Evelyn Wang has been one of the great privileges of my 40-year career. It is truly the role of a lifetime. Thank you to Daniel Kwan and Daniel Scheinert for seeing me and for this opportunity, I will forever cherish this moment," Yeoh continued.