Style Living Self Celebrity Geeky News and Views
In the Paper Shop Hello! Create with us
Cinemalaya

No. The Baseball Player is NOT a sports flick.

The film which won Best Picture at the 18th Cinemalaya Philippine Independent Film Festival Awards garnered three other awards on Sunday: Best Screenplay by its screenwriter and director Carlo Obispo; Best Editing by Zig Dulay; and Best Actor for the exceptional performance of its lead actor Tommy Alejandrino, “for his poignant and engaging portrayal of a boy coming of age amid the havoc of war,” according to the citation of Cinemalaya for Best Performance of an Actor for a full-length feature.

Here are the big winners and heavy-hitters of Cinemalaya 2022

The film was cited for “its…quiet power, for its subtle but trenchant storytelling, and for its penetrating take on the Mindanao conflict and the sad wreckage it has made of young innocent lives.”

Obispo has previoulsy tackled issues about Filipino children in his films, like children of OFW facing a death sentence in China in Purok 7; and about child trafficking in 123.

“A storyteller is a critic of his time. Children are rarely tackled in Philippine cinema. I felt the need to talk about Filipino children. It was an easy decision to take a closer look [at] the children of Muslim Mindanao," said Obispo.

The name Tomas Santos may not ring a bell, but it’s the real name of Cinemalaya’s Best Actor, 20-year-old Tommy Alejandrino who turns 21 on Wednesday.

He portrays the role of 17-year old Moro boy Amir, and the adoptive brother of orphan Khalid (JM San Jose); although admittedly “I did not know much about the Maguindanao war,” prior to being cast for the role, said Alejandrino during an interview.

The truth is, somebody else had earlier been cast as Amir. But as the pandemic dragged on for two years, the original actor for the role had physically matured. 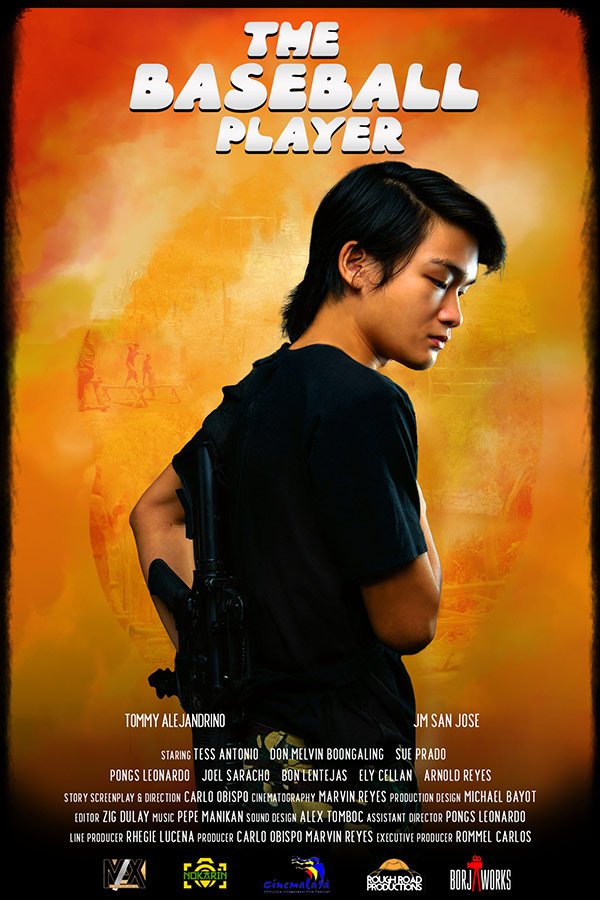 It turned out that Obispo had seen performances of Alejandrino on stage, including the young boy’s (and his schoolmates’) annual recitals for the Philippine High School for the Arts (PHSA), as well as his performances at the Virgin Lab Fest at CCP.

It was in this school where Alejandrino spent a good six years of his teenage life learning everything about theater: theory, dramaturgy, directing, musical theater.

“I was in the middle of a shoot when I got the call from Direk Carlo, who asked me if I would be interested in reading one sequence from his screenplay, through Zoom…A few days since we read a scene, I was eventually cast as Amir,” Alejandrino related.

It’s a blessing that Alejandrino is “athletic by nature,” having been into gymnastics and football before. To prepare for the role, baseball coaches taught him for two hours a day for two days at the UP Diliman campus.

REVIEW: Cinemalaya 2022 films 'break through the noise' with return to on-site screenings at CCP

“I didn't want our differences to get in the way of achieving the most truthful embodiment possible of how I envisioned Amir to be, so I would consciously read his character through the lens of a fellow teenager, Filipino, and human.  Amir has a totally different reality from my own, so through my imagination, I am able to imbibe the what ifs from Amir's given circumstances into my body through performance!” said Alejandrino.

The main location for the shoots was in a community of Aetas in Barrio Mayantoc, Barangay Labney, Tarlac, a place so remote that only a truck could go up from Camiling, and only once a day. And beyond a certain point, one had to walk for an hour through huge and slippery boulders.

“No hotel, no signal. Most of the houses were solar-powered,” noted actor Joel Saracho who depicted the role of the uncle of Amir, and the head of the armed local group.

The forest shots were taken in Mangatarem, Pangasinan, in a forest so large it straddles four provinces. The crew had a total of 10 ½ shooting days from April 27 to March 7 this year.

Alejandrino recalls having been caught in a lockdown in an Aeta community during the pandemic. This turned out to be a blessing, as “[It] gave me insights; because I had a three-month immersion [of sorts].”

As a director, Obispo prepared the two young actors more on their relationship with each other, rather than the conflict in Muslim Mindanao.

The Baseball Player is the first Filipino film I’ve seen that tackles the problem in Mindanao through the eyes of two kids who have experienced pain and loss. It stirs our emotions relentlessly, and never lets us go. The actors play a huge role in evoking these emotions, especially Amir. Tommy’s portrayal of Amir is natural, heartfelt, endearing and fresh.

Juror Jeffrey Jeturian, an acclaimed director said that Alejandrino’s was a “quiet but heartfelt performance as a young boy torn between choosing to pursue his personal dream, or performing his patriotic duties.”

“The Baseball Player is the first Filipino film I’ve seen that tackles the problem in Mindanao through the eyes of two kids who have experienced pain and loss. [It] stirs our emotions relentlessly, and never lets us go. The actors play a huge role in evoking these emotions, especially Amir. Tommy’s portrayal of Amir is natural, heartfelt, endearing and fresh,” said Cinemalaya juror Madonna Tarrayo, President/CEO of UXS Inc. (Unitel/StraightShooters).

“In a country which worships superstars, it is so refreshing to see a new and young face grace the screen. You can see that he studied his role as guided by the director, and made sure that he portrays it as real as can be. He drives and seals that instantaneous bond between his character and that of his adopted little brother, Khalid, as if they are siblings in real life. You empathize with him, you cheer for him—and in the end—you accept him for his choice,” Tarrayo added.

“Tommy’s role is not just about his dream; it’s also about caring for his family, especially for Khalid, and for a cause to protect their belief in the quest for peace. He portrayed all these roles masterfully and naturally,” she concluded.

“Tommy’s performance felt ‘real.’ I think the audience can agree, too – that we all rooted for him, and this is very much due to his performance. It had to be Tommy,” said Cinemalaya 18 juror Makiko Wakai, Programmer of New Asian Currents at the Yamagata International Documentary Film Festival.

“I’m just very grateful. It’s huge. It’s very huge. It’s a big deal to me. I’d been acting since I was 12 or 13 sa Makiling. Almost 10 years,” Alejandrino said when asked about his victory.

After receiving his award, Alejandrino was met by his actress-sister Kate Alejandrino, who is the leading lady in Cinemalaya 18’s Bula sa Langit.

“We hugged each other and cried. There are six of us in the family, but [acting] binds us because she also took Theater Arts. We share the passion and career interests. She understands the inner fears of actors in this industry,” Alejandrino said of his sister.

Cinemalaya 2022 Guide: Screening schedule and trailers for all full-length films

Susan Claire Agbayani is a freelance writer, editor, mentor and organizer of F2F writing workshops. She was a writing fellow in creative writing workshops at UP and MSU-IIT and has written for major newspapers, magazines, online sites and NGO-managed government projects funded by international organizations..