It's been a year since players have crossed blades with the courageous Jin Sakai in the critically-acclaimed samurai game of 2020, Ghost of Tsushima.

Game developer Sucker Punch had taken the masses by storm through this Playstation 4 exclusive, enrapturing the masses into venturing the scenic lands of Tsushima. In turn, providing a big impact not only to future releases to come, but also to the actual Japanese island that it was based on.

The virtual depiction of Tsushima is the epitome of visual and cinematic flair, however, the real island had been hit by a typhoon last September 7, 2020, leaving everything in its wake in ruins. The Torii gate of Watatsumi shrine was no exception to this. Seeking to rebuild and restore the gate, Watatsumi priest Yuichi Hirayama had organized a crowdfunding project to raise five million yen.

Torii gates are not only symbolic in the game, but are of the same significance in real life. These gates are indicators of temple entrances, a symbol that transitions from the mundane world to the sacred realm of Shintoism. As mystical as it sounds, these gates pay tribute to deities believed to reside in nearby forests or bodies of water, like how Watatsumi shrine's gate is to Toyatama-hime, Shinto goddess of the sea.

Fans that recognized the landmark did not hesitate to help as soon as news of the fundraiser was made known to the public. According to a translated article on Famitsu, the fans had managed to achieve more than the initial five million yen target, collecting 27 million yen worth of donations.

Though there are pandemic-related delays to the gate's restoration, the project organizer had expressed their gratitude to the contributions made during the campaign, even including the names of benefactors who have pledged more than 10,000 yen on the commemorative stone.

Truly there is a ray of sunshine after every storm, as fans have not only brought such joy to the locals of the island, but even GOT's director Nate Fox and art director Jason Connell have been appointed ambassadors of the real-life island. Tsushima Mayor Hiroki Hitakatsu's believes that, through them, the history and name of Tsushima island shall be spread in a wonderful way.

"Even a lot of Japanese people do not know the history of the Gen-ko period. When it comes to the world, the name and location of Tsushima is literally unknown," Mayor Hitakatsu remarked in a report on NME. "So I cannot thank them enough for telling our story with such phenomenal graphics and profound stories."

The city plans to create a new tourism campaign based on the video game after announcing their intentions of working alongside Sony Interactive Entertainment. The campaign encourages fans of the game to learn more about the island's history and landmarks. Hitakatsu plans on inviting Fox, Connell and the entire Sucker Punch production team once the pandemic is over.

Ghost of Tsushima's impact leaves no room for a quiet draft since its release last July 17, 2020, and not even the pandemic could slow down it's billowing momentum.

Selling over 2.4 million copies in the first three days of its release speaks volumes to its competition. Hermen Hulst, head of PlayStation Worldwide Studios, confirms that it is the fastest-selling first party PS4 game and in Japan, the highest lifetime sales for a PS4 first party game, surpassing Marvel's Spider-Man.

#GhostofTsusima is our fastest-selling first party original PS4 game with more than 5 million copies sold since its debut in July. What an incredible achievement by @SuckerPunchProd!

To support the popular title's release, Sucker Punch released Ghost of Tsushima: Legends on October 16, 2020, a multiplayer co-op mode for the original game that allows a party of four that feature a different progression to Jin's story.

The marriage of open world games and classic samurai films has opened a new door for video game ventures. Sucker Punch productions wanted players to have an authentic experience of the samurai commando fighting game. From consulting with real-life samurais to learn in-depth about Japanese warriors who have fought during the 13th century, to a field trip to the real-life island of Tsushima for field recordings, the studio has brought to life the beauty of pre-modern Japan within a console's reach.

Despite GOT's fame and sales growth, it was no survivor to the siege of critiques that stealthily tried to outnumber the diligent hero. The game lacked innovation, as its inspiration from games such as Red Dead Redemption—a game title from developer Rockstar Games—stood out more than the game's individuality. Though the game had borrowed several ideas from the outlaw cowboy turned quiet samurai trope, GOT leaves no excessive exposition, and crafts it's world into its own, central to Jin Sakai's want for redemption and justice.

Ghost of Tsushima was not only criticized for its overall development and functionality, but had opened up discourse regarding the game's misalignment to historical accuracy and representation, having fans police any form of criticism and reviews that leverage positive remarks.

“(It is) based on how Japan would like to be viewed in the wider world,” Haru Nicol, video game and media writer, in a Washington Post feature, points out during the discourse of Japanese representation and how depiction is to understand their country's culture and people, with no harm and bias.

As protagonist Jin Sakai once said in the game, "I will make sure that you are remembered..." avoiding any spoilers for the fans, the game truly leaves an impact on the player, no matter what the result of their experience might be, but this is not the last time the world will see the likes of this calm and collected warrior.

Ghost of Tsushima had a major upgrade from running on 30 frames per second on the PS4 pro version to running smoothly on a higher 1080p resolution at 60fps, playable and accessible on the PlayStation 5. The smooth transition evident in higher frame rates makes one wonder if Sucker Punch studios are working for other platforms beyond the PS5. It is speculation that there may be a GOT sequel and a possible PC release would be a smart marketing choice to create a larger reach for their audience.

Speculation may leave room for uncertainty, but a live action film adaptation for the title is certain. Sony confirmed in March 2021 that it is already in the works, with Chad Stahelski (John Wick) attached to direct. 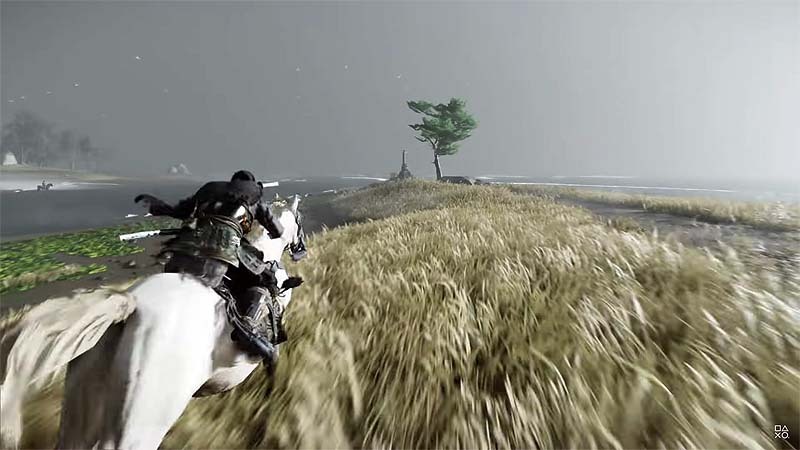 As reported on Deadline, Asad Qizilbash, Head of PlayStation Productions said, "We're excited to be partnering with Chad and 87Eleven Entertainment, to bring their vision of Jin's story to the big screen. We love working with creative partners like Chad, who have a passion for our games, ensuring we can create rich adaptations that will excite our fans and new audiences."

'Ghost of Tsushima' movie adaptation in the works

This will mark the second film to come out of the partnership between Sony Pictures and PlayStation Productions, as Uncharted is currently in post production and said to be released in February, 2022. Sony Pictures Television and PlayStation Productions are also developing The Last Of Us TV series, to be featured on HBO, with Craig Mazin (Chernobyl) to write and executive produce the project.