Cinco designed and created gowns for Stevens for the Miss Universe pageant, which concluded earlier this week.

In a Facebook post on Saturday, May 22, Cinco shared a screengrab of a comment made on Instagram by MGmode Communications, the publicist behind Stevens. The comment alleged that the Filipino designer sent the gowns for Stevens late and that they did not fit the Miss Universe Canada candidate.

To this, Cinco said that he asked Stevens’ team to remove the said comment. The designer said he also messaged Stevens to help defend him. 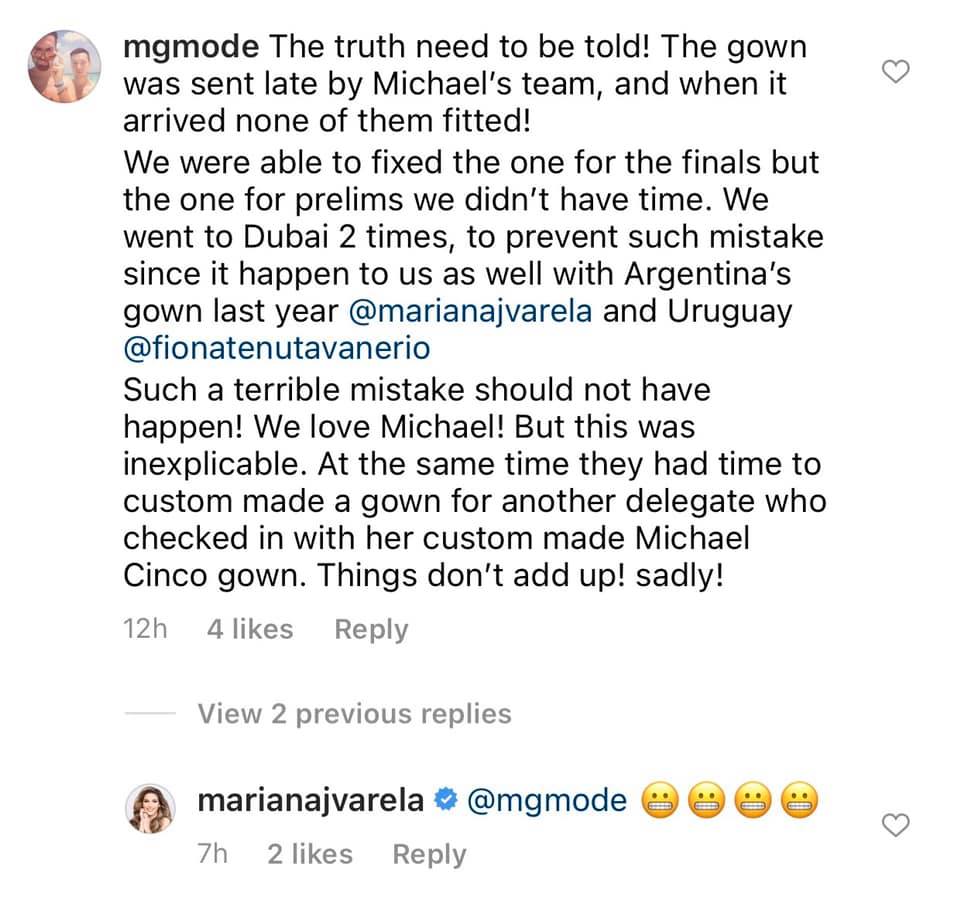 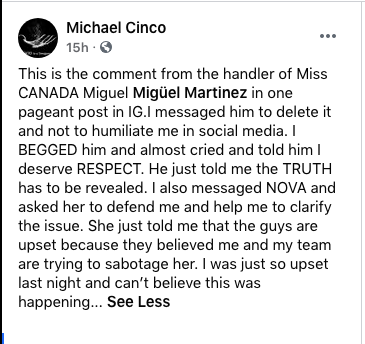 “She just told me that the guys are upset because they believed me and my team are trying to sabotage her. I was just so upset last night and can’t believe this was happening,” Cinco said.

In his post, Cinco addressed Stevens and the Miss Universe Canada team. “You have been spreading fake news about me and my team being unprofessional days before the pageant but I chose to be quiet and calm.”

He added, “But this time, I need to stand up for me and my team, as it is just so unfair!”

Cinco said he has been bashed and criticized in the past but simply took them all “with a grain of salt.”

“But this time,” Cinco added, “Not to mention, the eventual realization that I have been used and scammed by these low lives pseudo glam team..”

Responding to the screengrab of the comment MGmode made, Cinco said his gowns arrived on time, even citing that the Miss Universe Canada team was able to send him photos and videos of Stevens wearing them “showing how the gowns perfectly fitted her, days before eaxh event.”

“You even posted a video of Nova in her last fitting and she was happy,” he added.

Cinco said the allegation of him trying to sabotage Stevens is absurd. “Her life story was supposedly inspiring and I even went out of my way hiring a team of world-class photographer and film maker to shoot her in my couture gowns at a world-class location in Dubai just to give her extra publicity mileage and create for her a balance of glam and luxury as opposed to her humble homecoming in Africa. And everything in that shoot was PAID FOR BY ME,” he added.

Cinco noted that he also designed and created gowns for other Miss Universe candidates this year.

Finally, Cinco revealed: “You and your team have been using me and taking advantage of my kindness for the past 3 consecutive years to dress up your candidates without paying me any cents!”

“YOU ALL ARE UNGRATEFUL, VILE and professional USERS. Next time don’t ask me or any FILIPINO designers to dress up your candidates. Ask your Canadian designers to showcase their works in world stage,” he added.

Cinco ended his post by saying: “I DON’T NEED YOU in my career and dressing up your candidates WILL NOT HELP MY BUSINESS. STOP taking advantage of my KINDNESS and STOP scamming FILIPINO designers.”

Stevens has made her Instagram account private, but she responded to the issue on her social media account before restricting its privacy. Pageant social media pages have recorded Stevens' statement on the issue as well.

Stevens said that she has “nothing but love” for MGMode and Cinco, who “have both helped me in ways that I cannot even count.”

She added, “Michael, I have nothing but love and gratitude towards you. You have created the most beautiful gowns I could even think of. The fact that I was able to work with you is honestly a highlight of my career as Miss Universe Canada.”

"So I just want you to know that gratitude will never diminish no matter what and I express that gratitude publicly and privately and, God knows, my heart.”

“I really do appreciate gratitude because I really feel that gratitude is the greatest multiplier in life.”