I’m gender non-binary—but most people don’t know what this means, especially those who do not know about sexual orientation, gender identity, and gender expression or SOGIE. And since we still don’t have a Filipino term for non-binary, it’s difficult for me to explain what it is to others.

I grew up knowing only two genders like most of us do. I was born male and was told to be manly at all times, and if I ever become feminine or “mag binayot,” as they would jokingly say, I would get crucified. That stuck with me growing up, I had to put on an act of the socially accepted male gender stereotype, and I convinced myself I was a man until high school.

I never felt like a man or a woman.

In high school, my siblings and I would watch America’s Next Top Model and that was when I first heard the word “androgynous.” I did my research about the word and fell into this magical rabbit hole of genders and sexuality, that was my first introduction to the LGBTQ+ community. I found out that there was actually something to call myself: non-binary.

I never felt like a man or a woman—and sure I do some stereotypical gender roles like cooking good food, doing carpentry and lifting heavy stuff, but to me, that was something anyone could do regardless of gender.

Through college, people were more open-minded but I was still shy to call myself non-binary or “enby.” I was gay, pretending to be bi, but that was a phase long gone. Despite learning about being non-binary, I was still afraid of using it because not a lot of people around me knew about it. It’s not a term many Filipinos know about and I didn’t think they would understand. 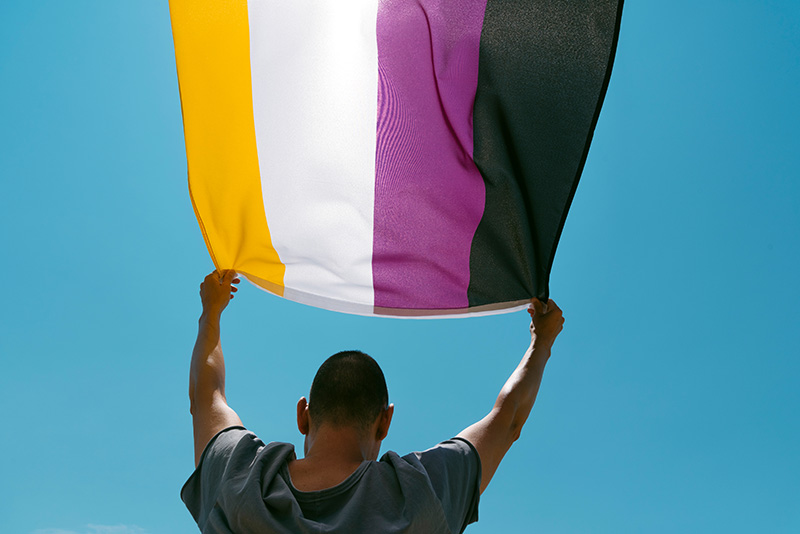 It was difficult to explain to others what being non-binary was in person but it was so easy to explain it to others on the internet. There I met people just like me from different parts of the world, especially in the western LGBTQIA+ community. It was common for them to use the term I had struggled to explain to my peers in the queer community here. Some of them would argue that if you are “bakla” then you are “bakla.” You can only be either a gay man or a trans woman, but I kept telling them that I don’t feel that way. I didn’t feel like I belong in the trans spectrum—I was just existing in the middle or maybe just floating around.

People need to understand the difference between sexual orientation and gender identity and that you don’t always have to be stuck between being a man or a woman.

Blossoming and being non-binary

I finally blossomed into this being who is either of the genders in college. The most obvious way a non-binary person like me can express themselves is through fashion! After finally accepting myself, I stopped shopping at malls in the men’s section and instead went to ukay-ukay to find clothes that nobody usually liked to experiment with my style and find my own way of expressing my gender.

Being non-binary gives me so much freedom to do and try a lot of things—I am not afraid to go outside the box society has set for most people.

My first styling inspiration came from Florence Welch from the band Florence + the Machine. She would always wear these flowy blouses and had this androgynous look which made her look beautiful as either gender, just like Howl from Howl’s Moving Castle.

Being non-binary gives me so much freedom to do and try a lot of things—I am not afraid to go outside the box society has set for most people. If I feel like it, I would wear a dress or a suit, or combine the two and create this genderless style. But my look has often confused people around me. Most Filipinos, in my experience, are used to looking at someone and only thinking of two genders: if you wear a dress, you’re a woman. But if you’re a man wearing a dress, you’re seen as a man pretending to be a woman. I’m neither. I’m just a person wearing a dress.

Oftentimes, I’d be called ma’am and sir at the same time and the confusion actually makes it funny and a little pleasing because it validates how I feel, how I’m not on the gender binary.

Pronouns are difficult, especially being Bisaya. Although I don’t mind whatever people use as long as they’re respectful. People can use he/him, she/her, they/them, daze/dai, dong/dzong, and other pronouns as long as they mean it in a nice way. It’s a good thing we don’t often use gender-based pronouns when speaking in Filipino. "Siya" makes it easier for everyone to avoid misgendering.

There is no pride in queer tokenism, or why allyship should go beyond Pride month campaigns and rainbow logos

Using gendered public bathrooms can be a challenge. You’re stuck between choosing to use the women’s bathroom to avoid getting weird stares from men or go to the men’s bathroom to avoid confusion from women—either way, you’ll surely worry about making people uncomfortable. Sometimes, I would wait until the whole bathroom is empty and leave as fast as I can to avoid unwanted eyes. It’s easier though when you have friends to go with because being alone doesn’t always feel as safe.

There’s still a lot to learn about what it means to be non-binary here in the Philippines and understanding SOGIE is a start. People need to understand the difference between sexual orientation and gender identity and that you don’t always have to be stuck between being a man or a woman.

Our pre-colonial history tells us that non-binary people have existed and there were genderless deities who changed forms into different genders and beasts. Some would live to be in between with half a body of a woman and half a man, and there are those that do not specify a gender at all.

If I were given a chance to be recreated, I would like to be a genderless being, respected without question. This is why in most of my art, I would interpret myself as a being not bound by gender, who is always kind and caring, who will always give hope and speak for what is right.

My partner knows how I feel about my gender, and as his muse, he would also interpret my gender through his artworks. Being an artist and a non-binary person gives me so much freedom to be myself and to express it, I could only hope for society to realize and understand that, because what is acceptance without understanding? I’m hoping for more and more representation of non-binary Filipinos in the media, in education, and all sorts of outlets and platforms that will help the young ones learn that there is something for you out there and not just what society has set for.

Renz is a 25 years young queer artist from Nabunturan Davao de Oro who identifies as non-binary or gender non-conforming.