Men, of all shapes and sizes, are competitive. From a simple argument, to out-driving a golf foursome or volleying it hard in doubles at tennis—we, myself included, are sore losers.

It’s ingrained in our DNA, and if there is anyone who displays the worst in all of us, it’s the former tenant at 1600 Pennsylvania Avenue, the orange misogynist who defines everything that we shouldn’t be.

Definitely, I wouldn’t want him to be my uncle. And this is where this story begins: what it’s like to be an uncle—or, in our parlance, “The Tito.”

Research for this column is purely anecdotal, and meant to be totally from left field, because honestly, we defy explanation. In fact, my mother said men always try to find ways to achieve world peace, while women make sure there is real money in the bank and food on the table. Men are just little boys.

I cheated a bit (yes, men like to push the outside of the envelope) and spoke to dear friend and fellow columnist Monique Toda about “Titos,” after her well-received piece about the “Tita.” So there goes my inner Usain Bolt: I needed to make this essay an answer. And quite a revelation it is.

Geez, why are people calling me ‘Tita’?

The “Tito” archetype comes in different forms—the new norm runs maybe from 40 to 60 (referring to age, not to girth size; that part comes later).

The 'Tito' archetype comes in different forms—the new norm runs maybe from 40 to 60 (referring to age, not to girth size).

When we were growing up, Titos all seemed so old, and so fragile. They sat at tables among themselves while opening a bottle of scotch, playing poker, or just repeating the same stories from their youth over and over again. They traded stories of their misadventures, and their tales got taller and more embellished over the years—well, this, my reader, sounds like an LSGH Homecoming (unfortunately cancelled this year because of the virus, God knows what a super-spreader that would be like as a headline: “Green Archers plagued with COVID, vaccine impenetrable”).

But modern science has its way, and vanity, a very Tito thing, is a key element in this tale. Like the Spice Girls, the Titos come in varieties that tend to amuse. As we begin midlifing (I did at 40), we tend not to want to accept that we can no longer read the menu, and more so books (do people still read real books?), and struggle with their eyesight and keep the glasses discreetly handy.

Their phone fonts become larger, the better to be read from the back of the elevator—a bane, perhaps, for the one that decides to go astray in plans of a rendezvous for a bit of needed relaxation, or for the one drink for the road or the chance meet-up.

COVID killed all that, and the concept of a DOM (dirty old men tend to start young, mind you) thwarted to the delight of their partner. Solid advice to all those Titos looking for a fling: Pay as you go. Stick to generic labels. Social media is not your friend, despite the facemask.

The sportier set has set aside golf and tennis, to join the Lycra-wearing groupies where their kilometric Strava meters are moments of triumph. 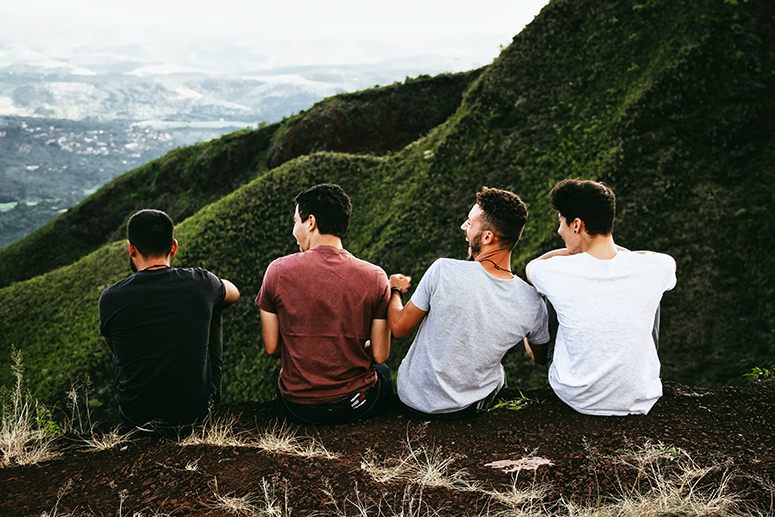 Outfitted with bikes that can serve as a major downpayment to a Proscenium apartment, off they go with their Peloton for hundreds of kilometers, wearing skintight suits that can often reveal their members as a badge of honor because “commando” is the best way to travel.

Followed by a retinue of SUVs, these Titos either hit the highways or opt for a mountain bike challenge, with Sarge (I like to call bodyguards that) close by to bend down should a blown tire happen.

The triumph comes after they complete the challenge, requisitely posting their achievement for all to see. Nothing wrong with that, right?

And then again there’s CrossFit, a personal favorite of mine that I miss immensely, where the workout is more soul-searching than anything else. It separates the men from the boys, with intensity. I am a proud Tito of CrossFit.

Titos love toys. In the absence of bling, it begins with horology. Titos will give a new entrant a quick glare at the wrist, a badge of true Tito-ism.

Sports remains where the Titos prowl: golf is about the nicest set, and J.Lindeberg ensembles (tight as hell, but men again insist on a smaller size because they accept the fact that gravity has taken its toll on their body), because if you cannot play, display.

Can’t say much for tennis, but perhaps having a super slick tennis court at your parents’ home isn’t a bad thing, and you have Manila’s top players as your pros. Tennis whites are the ultimate in sports fashion.

Titos love toys. In the absence of bling, it begins with horology. Titos will give a new entrant a quick glare at the wrist, a badge of true Tito-ism—with the recently discontinued (per my fellow Tito Matthew Lopez of Vintage Grail) Patek Philippe 5711 the new “it” watch, the Tito is on the prowl.

The more obscure the watch the better, and a saunter to The Peninsula Manila is where bonuses are blown. Rolexes are left to the BIR examiner and US presidents, unless they are the uber-rare Daytonas, or new released 41mm colored dials.

Richard Mille, Blancpain and tour billons of any form are the marks of true Tito-ism. You get the drift: a Tito can be self-involved with his curios. It is always the chase for the unique, or simply: “Bah, mine is better than yours.”

From wristy baubles follow the wheels. Vespas are making a comeback, and you begin seeing them, à la Roman Holiday, in the Republic of Alabang or the Fortress of Forbes, making their runs where having just one isn’t enough.

This Italian contribution to Tito-ism as a rite of passage isn’t new. Just ask fellow Tito Kim Atienza who drives his vintage Lambretta to our old work-life-home from Manila to Quezon City, in style. And along with that comes the Gentleman’s Run, where, dressed in finery, these dudes sputter around Manila to end up at a designated coffee shop—to talk about their scooters even more.

Not happy with the scooter, what comes next is the all-important Tito signifier: the sports car. Trust me, I went through that phase. I had imported a one-of–a-kind Mini Cooper that I kept for a few years—convertible, of course.

The car is one of the most important Tito accoutrements. There is a fine line between class and ODW (or “ostentatious display of wealth”), a line where the Italians rule.

Sundays is when the boys show off their stuff, from Ferraris to Lamborghinis (to the happiness of our dear friends at PGA Cars), where a Porsche seems pedestrian in the sea of exotics.

The American muscle car is left to the artista, getting his Marlon Brando kicks in those bad boys. One curious note: they say the more zeros the car has, the more zeros are sitting behind the wheel. Titos like to compensate for their shortcomings, you see. Yes, it’s about the toys, boys and girls.

The Titos we like are quiet and helpful, softspoken and discriminating and sagacious. That number is dwindling, as flash and cash, sadly, are what now receive a second look.

And what about dining? Titos today are starting young with a plethora of pricey scotches and vodkas. And then there are those wine dinners or deliveries from our friendly purveyors like Bacchus, Premium Wines and Txanton or The Artisan Cellar Door, where a bottle of Romanée Conti can set you back a kidney. Drink the bottle first before you sell your organ, so you can enjoy it at least.

The secret wine clubs and the cellars are yet again ascending in the realm of the Tito firmament. Did I mention the paletas of Jamon Iberico de Bellota, or A5 wagyu? Don’t get me wrong, I do like good things, like champagne, but will not blow P40,000 on a taste. It is très déclassé in these trying times.

So are Titos really just a bunch of showoffs and ruffians? No, not really.

The Titos I know and mingle with are discreet, and are slow to show (you know, BIR), lest you ride a horse into a party and become the talk of the town—until, like the passing news cycles, the next wild party closes down a restaurant.

They dress simply, perhaps shop at Signet where quality over the huge GG, H and LV logos are for the more discriminating. They wear bespoke suits either made in HK (a rarity in travel) or Napoli. All the way to designer eyewear.

They move quietly in the social strata and sit in their shorts and tees drinking beer in the cogons while enjoying plans for the next trip to some exotic destination, perhaps for a group bike ride à la Paris to Dakar, on their NetJet subscription. They head for Polaris Fine Foods for their fix of missed Fine de Claire or Gillardeau.

The Titos we like are quiet and helpful, softspoken and discriminating and sagacious; Renaissance men who wear clothes with a sense of je ne sais quoi, drive not-too-flashy roadsters to the club, and have a certain gait from their upbringing. That number is dwindling, as flash and cash, sadly, are what now receive a second look.

The car is one of the most important Tito accoutrements. There is a fine line between class and ODW (or “ostentatious display of wealth”), a line where the Italians rule.

Those that lived a good life as children live on trust, or work at it, and refuse to be part of the “left to rights,” as we say in the rag trade. And they abhor to have themselves and their homes featured (guilty of the opposite, but never mind, I was once showbiz). True luxury for this Tito is simplicity. (That, for us mortals, is relative, right?)

Age is really but a number, and as I creep toward 60, I, like many Titos, try to keep fit—slowing the aging process because you cannot stop the inner genes from rearing their heads, displaying all sorts of hereditary diseases. Even the fittest of us take a leave sooner than expected.

But there is hope—we can always recycle our lives like that 95-year-old marathoner. Closer to home, look at friends like Ernie Lopez or Century Tuna’s Greg Banzon—Titos who know the value of good living and healthy lifestyle without the endless string of accoutrements.

The moral of the story, fellow Titos, is all about keeping healthy. We have come a long way from watching the oldies at the other table, because that is who we are now.

You can’t take your car with you but you can say that, proudly, we’ve defied age. Of course, there is an Aivee or a Vicki to help along the way. A Botox here, a filler there won’t hurt. But for some, if there is an implant to keep the flagpole going, that would be a blockbuster. Because every man-boy always likes being the alpha in the room, with this BSD.

Monchet Diokno Olives is a veteran of over 30 years in media and television. Now retired, he spends time as a second-generation (#thefanman) abanico maker and works on passion projects in the field of art, design and corporate communication consulting.

Home is where the Heart heals