It looks like longtime friends Jo Koy and Chelsea Handler have taken their relationship up a notch as seen in their social media posts lately.

Speculations have been whirring around that Jo Koy and Chelsea are dating, especially after they were spotted getting cozy at a Dodgers game in late August.

Then came Sept. 27, when the two went Instagram official through Chelsea’s post of a cute photo of her and Jo Koy in an empty stadium, together with another photo where they share a sweet kiss.

“He’s on tour, I’m on tour, sometimes we tour together,” Chelsea wrote in the caption of her post, where she also used hashtags to promote both of their series of shows #VaccinatedAndHorny and #FunnyIsFunny.

Buried in a sea of comments was Jo Koy’s short but sweet response to Chelsea, “Mahal kita.”

Fans and fellow celebrities expressed their kilig for the couple, as some say they have been waiting for this relationship to happen.

Actress Charlize Theron swooned over the couple, “I ❤️ this soooo much!”

Among others who sent their love and excitement for the couple were Paris Hilton, Nicole Scherzinger, Fortune Feimster, Nikki Glasser, Olivia Munn and Katie Couric.

Meanwhile, Jo posted on his Instagram Stories clips of him and Chelsea locked arms as they speak to comedian Tiffany Haddish, and a video of them canoodling on the plane where Chelsea calls Jo “honey” as she showers him with sweet kisses. 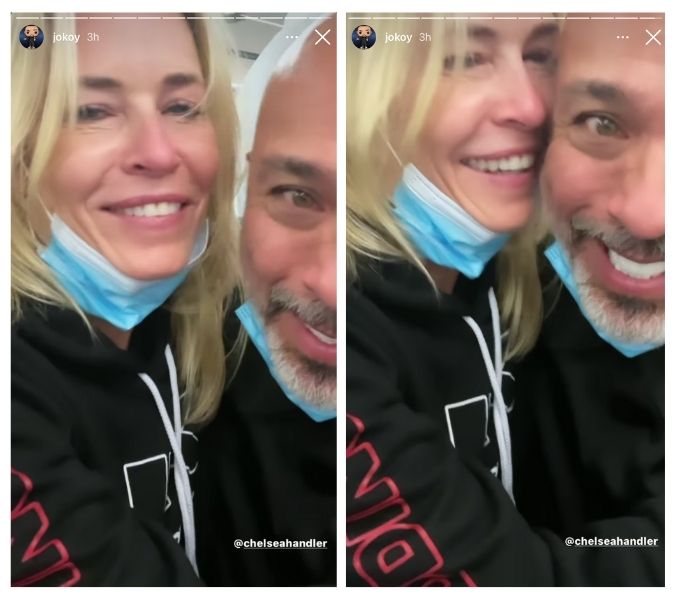 A quick scroll through Jo’s Instagram, you’ll see that Chelsea has been in some of his most recent posts, doing skits, supporting Chelsea on her Las Vegas show, and more.

In March, Chelsea hosted the virtual launch of Jo Koy’s debut memoir Mixed Plate and and introduced him as “one of my dearest friends” and both exchanged sweet friendly “I love yous” like how they usually do.

Jo Koy has a teenage son named Jo with ex-wife Angie King. He was also reportedly engaged to long-time girlfriend Amy Bray in 2018.

Prior to going Instagram official with Jo Koy, Chelsea posted a photo one week ago saying she is “finally in love.”

“Just sitting here in Mallorca thinking about how grateful I am to have so many people that I love in my life, to live the life I do and to be going on tour doing what I love,” she wrote.

“And that I’m finally in love, with the best kind of guy there is. There is hope for everyone! That kind of stuff,” she concluded.

Chelsea is an open book when it comes to her previous relationships, including with rapper 50 cent, Animal Planet host Dave Salmoni and hospitality mogul André Balazs.

Chelsea and Jo Koy have been friends for quite a while now, dating back to when Jo was a panelist on Chelsea’s talk show Chelsea Lately from 2007 to 2014.

How much does Song Hye-kyo earn per episode of 'The Glory'?