Trust Nadine Lustre not to let false reports about her go unchecked.

In a series of Instagram stories on Saturday, Jan. 9, Nadine clarified claims that she was wearing a swimsuit while going on a hike at the start of the year.

‘I was just lost’: Nadine Lustre says 2020 brought fears of becoming a ‘has been’

Nadine did in fact go on a hike to welcome 2021. Last week, James Reid posted photos and videos on his Instagram account revealing that he went on a hike with some of his friends—ex-girlfriend Nadine included.

But the 27-year-old actress-singer said she did not hike in a bikini. Her posts seem to be calling out a report that said she did.

There are also viral tweets claiming that Nadine wore a bikini during the hike.

Nadine explained that she was probably seen wearing nothing but a bikini because she was drying her shorts out—presumably after getting them wet during their trek—before continuing their hike. 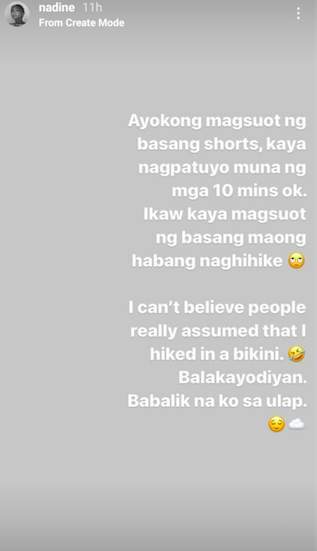 “I can’t believe people really assumed that I hiked in a bikini,” Nadine added.

Nadine and James’ hike made headlines last week, with their followers and showbiz denizens asking if this was a sign the two have gotten back together.

In love, indeed: Julia Barretto admits she is ‘taken’

This is because their hike happened a few days after entertainment news site PEP.ph reported that the former lovers—who admitted their breakup in January 2020 after an almost four-year relationship—are a couple again.

The report even claims that James and Nadine are already living together.

In 2017, Nadine responded to reports that she is living together with James by saying, “Come on guys. It’s 2017!” That answer became viral and has become a meme.

James and Nadine have yet to respond to reports that they have gotten back together.

What you need to know about the death of Elisa Lam

Is your allergy worsening this cold season? An allergist explains why