With renowned artist Ramon Orlina, you just don’t talk about art. Because a lot of his stories come from the heart.

Always jolly, amiable and lovable, Orlina can talk nonstop about the things close to his heart. He is as transparent — or shall we say translucent — as his glass sculptures. I remember the first time I interviewed him many years ago in his Manila home when he and his Malaysian wife Lay Ann Lee were newlyweds, he seemed like a love-struck young man. He still is. Love-struck, that is.

Orlina laughs as he retells his love story. “I had a project then in Singapore which required my presence there for weeks. But I had to exit Singapore and stay in Malaysia for two days to get a visa again for Singapore.”

The two days stretched to seven days. His Filipino friend said: “Ramon, I will introduce you to my Malaysian housemate Lay Ann Lee; she is the one who polishes my Orlina sculpture at home.”

Orlina misheard him, and thought he said “housemaid.”

Then the friend added: “She is a lawyer.”

Wow, intriguing! His housemaid is a lawyer, Orlina thought. When Orlina saw Lay Ann, his heart fluttered, flew into pieces like glass! This co-tenant of his friend was lovely.

“Every day, for one week, I sent her flowers,” recalls Orlina. Fast forward to 10 months after, and you have their wedding scene in Manila.

Orlina, who has done it all and marks his 45th year as a glass sculptor — a multi-awarded one — says he still has a lot of dreams to fulfill, mostly for his and wife Lay Ann’s four children.

“The Philippines is so similar to Malaysia,” Lay Ann had said, explaining why it wasn’t difficult for her to adjust to life in Manila.

Now as an “old” man, Orlina, who has done it all and marks his 45th year as a glass sculptor — a multi-awarded one — says he still has a lot of dreams to fulfill. The dreams are mostly for his and Lay Ann’s four children, though each one has already made some accomplishments.

“Ningning worked on the Tree of Life project in the National Museum of Natural History here in Manila,” explains Orlina. “This is special for me because right across is displayed my first sculpture named ‘Paradise,’ which is the only visual art sculpture in the whole museum. Ningning was awarded the Erasmus Mundus scholarship and she was able to study in Barcelona, California and Hamburg, finishing Environmental Engineering and now working in Berlin. She was a cofounder of the Tagaytay Music and Arts Festival, an annual event that attracts over a thousand guests at Museo Orlina in Tagaytay. She does this project along with her siblings Michael and Anna.”

The Orlinas’ third daughter Anna is a glass artist like her dad. She studied at Pilchuck Glass School in Seattle, Corning Glass Museum in New York and the Czech Republic for glass art.

“Anna is more gifted than me,” says Orlina, who is proud of his daughter’s clay sculpture done during a live session with a model. 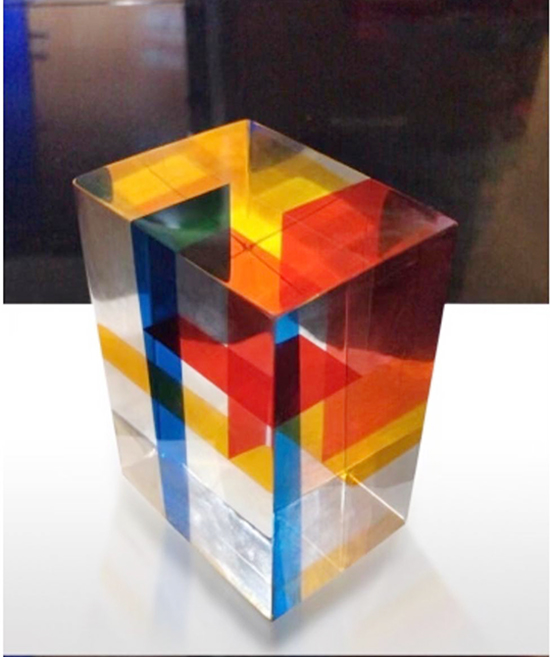 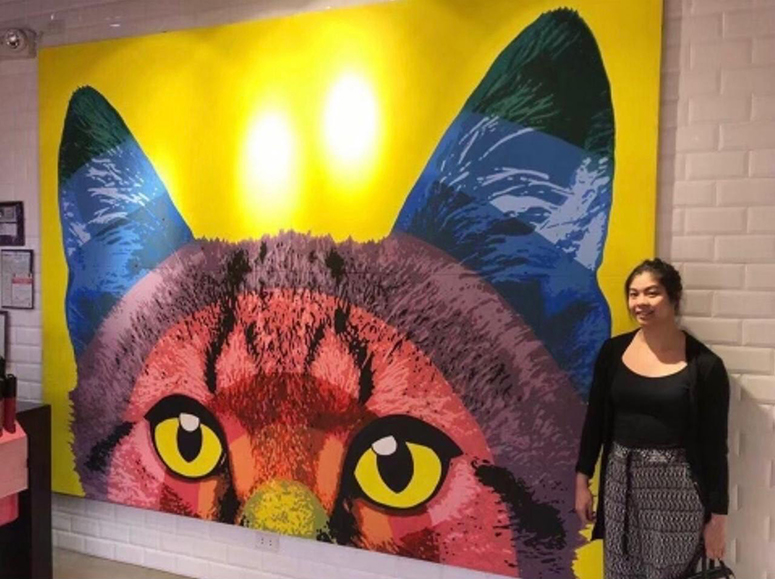 Michael, their only son, started Arts Management in Ateneo and finished the course in De La Salle-College of Saint Benilde. Like Anna, he studied at the Pilchuck Glass School in Seattle. “Michael now works at our Atalyer (atelier plus talyer — get the point?). I acquired for him a big sandblasting machine from Korea and I hope he can create his own works in glass.”

Lay Ann manages the art business, though she studied law in England and took the board exams in the UK and practiced law in Malaysia, says Orlina, who himself is an Architecture graduate of UST.

So you can imagine the Orlina family loving and living art, and bonding through art activities. “Our travels are always bonding experiences to see some of the best contemporary art in the world. Pre-COVID, we would go to Art Basel  in Hong Kong yearly,” sighs Orlina.

And yet another passion of Orlina that he shares with family is his love of cars. He did give his son Michael car-driving tips. “But the more significant moment for me teaching someone to drive was teaching my father. He was a ship captain and he knew how to captain a ship, but not drive a car.”

Orlina reminisces that his first car was the Beetle. “In my younger years as an artist I vowed that when I have the means, I would make a four-door Beetle limousine.” He was actually able to do two Beetle limousines — one white and the other black. “Michael loves both of them and even used them for his prom nights.” Today, Orlina rents out the Beetle limos for weddings and special events. 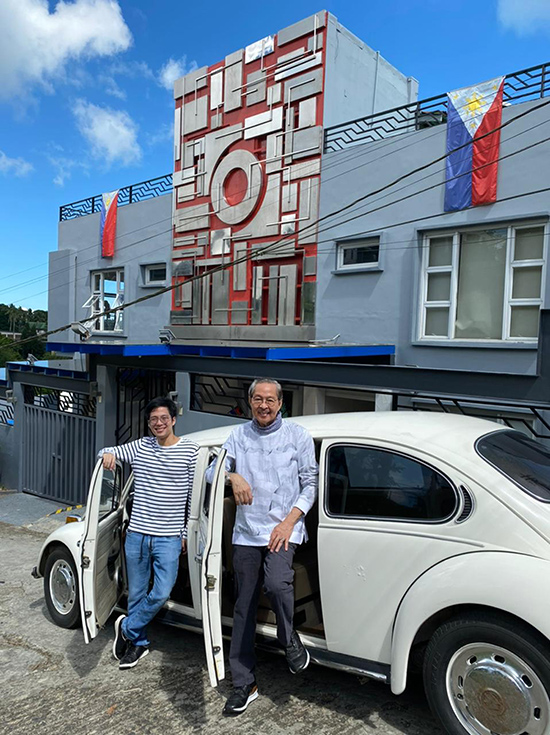 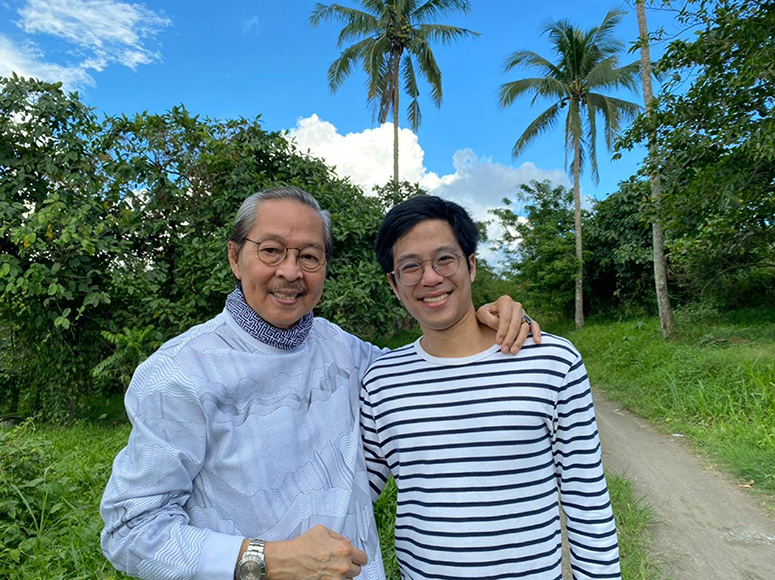 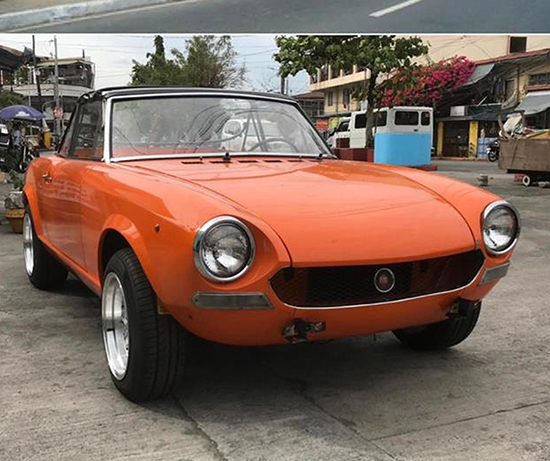 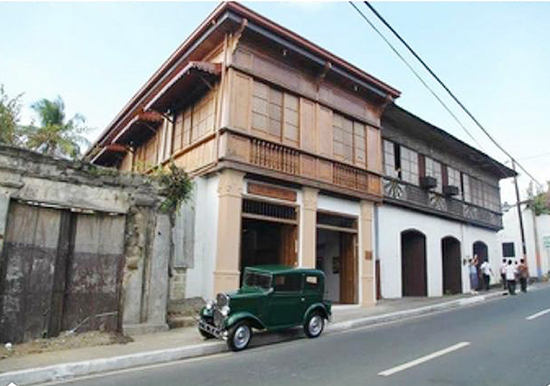 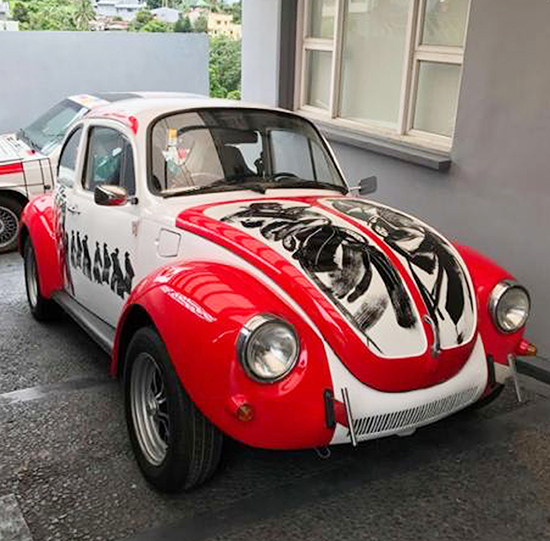 Another car that catches Orlina’s fancy is the BMW. In 2007, he was commissioned by BMW Philippines, together with seven other Filipino artists, to paint BMW miniature art cars. “I am now working on a real 2007 BMW 6-series and painting it with a ‘glass’ top. I will exhibit it here in the Philippines and hopefully in Hong Kong as well. Michael is assisting me in this project.”

Right now, Ramon and Michael share another bonding moment: watching Formula One races. “It is exciting to see the best cars and best drivers in races. I knew all about racing many years ago. However, my son is the one now explaining to me about today’s races and strategies.”

Art, family and fast cars. These are the renowned Ramon Orlina’s passions. On top of it all is his rule: “To be a good father, love your wife and children. Guide them to be spiritual. And lead them into God’s ways.”

Asking for a Friend