It is a blessing to have loved ones supporting you throughout your journey on the way to achieving your dreams. For Miss Universe Philippines (MUPH) 2021 Beatrice Luigi Gomez, her girlfriend of six years, DJ and entrepreneur Kate Jagdon, was there to cheer her on every step of the way.

On the day of the Miss Universe Philippines 2021 competition, held at the Hennan Alona Beach  in Panglao, Bohol, Jagdon reposted photos of Gomez on her Instagram Stories hyping up fans for the coronation night. “Cebu City is definitely ready for the universe!” She captioned the post.

During the competition, Jagdon was in full support on the sidelines of the venue, which permitted a socially-distanced audience. In her Instagram Stories, Jagdon can be heard cheering on for Gomez as the Cebu City bet sashayed the runway. 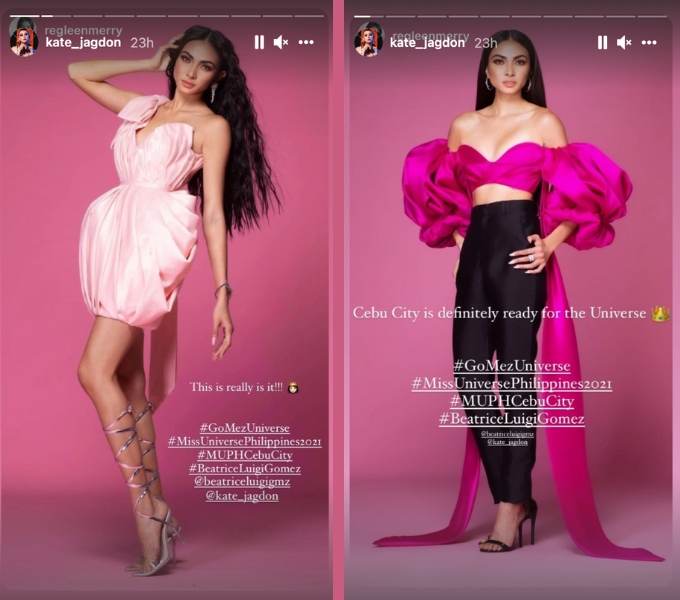 She also posted a video of the moment when the MUPH 2021 winner is about to be announced. On stage were Gomez and Katrina Dimaranan of Taguig City with Miss Universe 2020 Rabiya Mateo holding the “Filipina” crown. The excited crowd was pumped, and so was Jagdon, who can be heard chanting and cheering with the audience “Cebu!” She continued filming until the Gomez was crowned and cheered on.

A few moments after Gomez’s win, Jagdon penned a sweet note for her on Instagram, together with Gomez's photo wearing the "Filipina" crown.

In her post, Jagdon also thanked the people and groups who were there throughout Gomez’s MUPH 2021 journey, including their family and friends, Aces and Queens, fashion designer Furne Amato and Gomez’s glam team.

“And to the people who supported, who prayed, who rooted and congratulated her, thank you so much. You are the reason why she held her head high and continued to conquer her fears.”

(Jagdon also penned a heartfelt message for Gomez on Instagram when the latter won the Binibining Cebu 2020.)

It was during the the MUPH interview challenge when Gomez, who advocates for gender sensitivity and awareness, talked about Jagdon, who she said she shared her hobbies and love for sports with. Gomez placed sixth in that challenge.

After the Top 30 MUPH 2021 candidates were announced on Sept. 21, Jagna posted a photo of Gomez and congratulated her for making the cut.

Jagdon also reminisced the time when Gomez was contemplating about joining Binibining Cebu. “You were talking about how scared you were about the journey and now you are fighting or the Miss Universe Philippines crown,” she wrote.

Jagdon also told Gomez to “just be you authentic self the way you have always been since the day I first met you. I’m sure the people will love you for being you, just like I do.”

She concluded, “Show them what you got, always remember we stand behind you.”

Single at Christmas? Here's why it isn't such a sad, bad thing at all