Style Living Self Celebrity Geeky News and Views
In the Paper Shop Hello! Create with us
KJ Rosales / The Philippine Star

It is a big day for Ferdinand Marcos Jr., who is now officially the 17th president of the Philippines after his inauguration on Thursday, June 30. It is also an important day for Twitter users, who filled the social media platform with mixed reactions about the event.

Keywords such as ‘OurPresidentMarcosJr.' and 'Martial Law', were among Twitter’s trending topics after Marcos Jr., who gained a landslide win of over 31 million in the recent election, officially took his oath of office and replaced now former president Rodrigo Duterte at the National Museum of Fine Arts in Manila.

Many supporters of Marcos Jr. took to social media to post their praises and congratulations to the 64-year-old Ilocos leader. 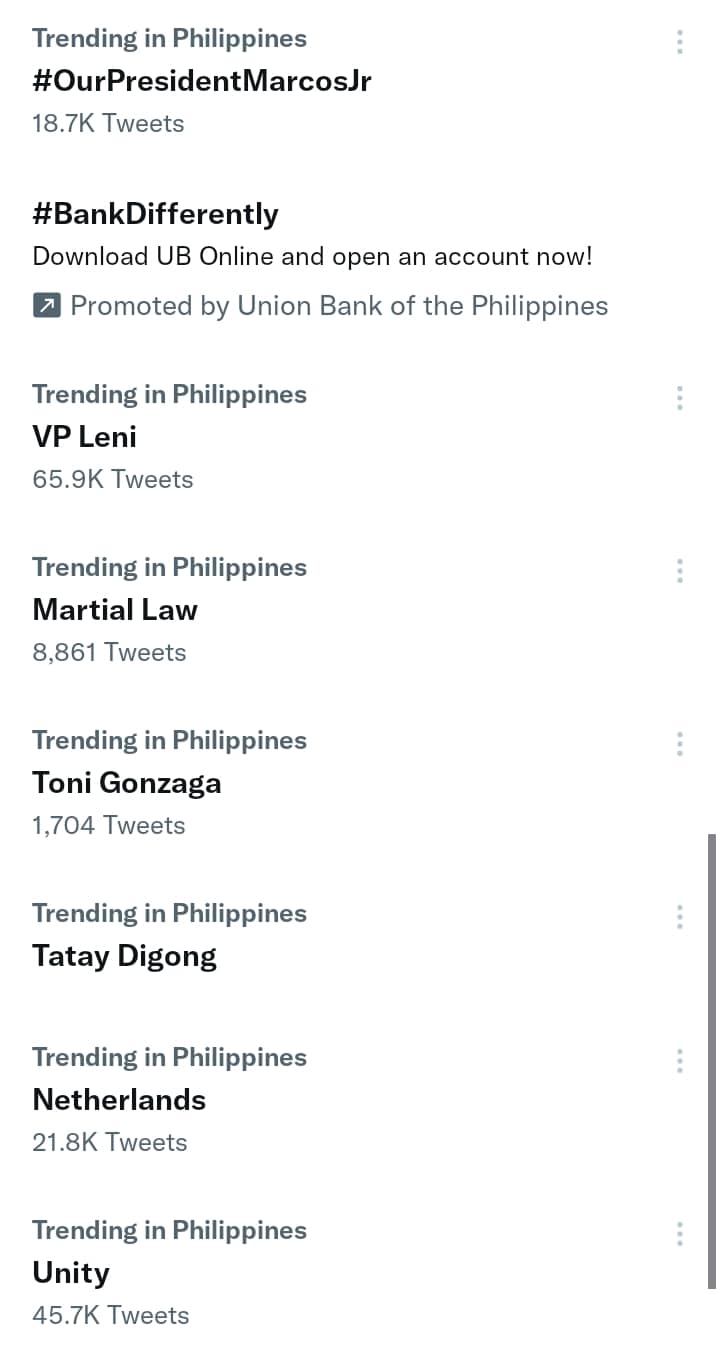 "Congratulations to our 17th President. Lead our country to a better Philippines. We love and support you," one user wrote, accompanying his post with a poster of Marcos Jr.'s inauguration.

Another user posted pictures of the politician attending the event with the caption: "A new administration begins and brings with it a new beginning."

Other users also shared how proud they are of Marcos Jr.

"We are proud to say that we voted for this man because of his good heart for the Filipinos! No need to say more just look at the picture and you'll get it."

As Marcos Jr. followed the footsteps of his late father, whose presidency was smeared with numerous human rights violations against people critical of his administration, some users could not help but bring the topic of Martial Law into the table.

"I will never recognize a president who does not even recognize the Martial Law victims," one user tweeted.

"I'm really sorry to the survivors of the Martial Law who has to witness yet another Marcos take the Presidential seat today," another one said.

One of Marcos Jr.'s presidential rivals, former vice president Leni Robredo, was also a hot topic among Twitter users, who said that she was "the one that got away".

"I have no regrets supporting you, VP Leni. I have no regrets standing up with you. Salamat sa tapat at malinis na serbisyo mo, you will be my most favorite TOTGA. My President," one user wrote with an attached picture of Robredo in a salute.

Another one posted: "In a sane and just Philippines, you would be the one taking oath as President tomorrow. But alas, maybe the country is not yet ready for your greatness. You will forever be remembered as our greatest TOTGA, VP Leni."

Meanwhile, the hashtag "#NeverForget", a phrase used by anti-Marcos protesters who want to warn others to not forget and disregard the victims under the Marcos regime, also entered the list of trending topics.