Style Living Self Celebrity Geeky News and Views
In the Paper Shop Hello! Create with us
Bongbong Marcos Facebook page

Five months before the 2022 national elections, the Marcos-Duterte tandem is the Filipino’s top choice for the two highest offices in the land as shown by the latest election survey of Pulse Asia.

According to the survey conducted from Dec. 1 to 6 and released on Dec. 22, more than half (53%) of Filipino adults express support for former senator and late dictator’s son and namesake Ferdinand “Bongbong” Marcos Jr. in his presidential bid, while 45% are in favor of having Davao City Mayor Sara Duterte as the country’s next vice president.

Marcos, who is facing several disqualification petitions in the Commission on Elections, received his highest ratings from Mindanao at 64% and the National Capital Region (NCR) at 61%.

Among the presidential aspirants, Vice President Leni Robredo takes the far second place with 20%, an improvement from the June poll where she received 8%. 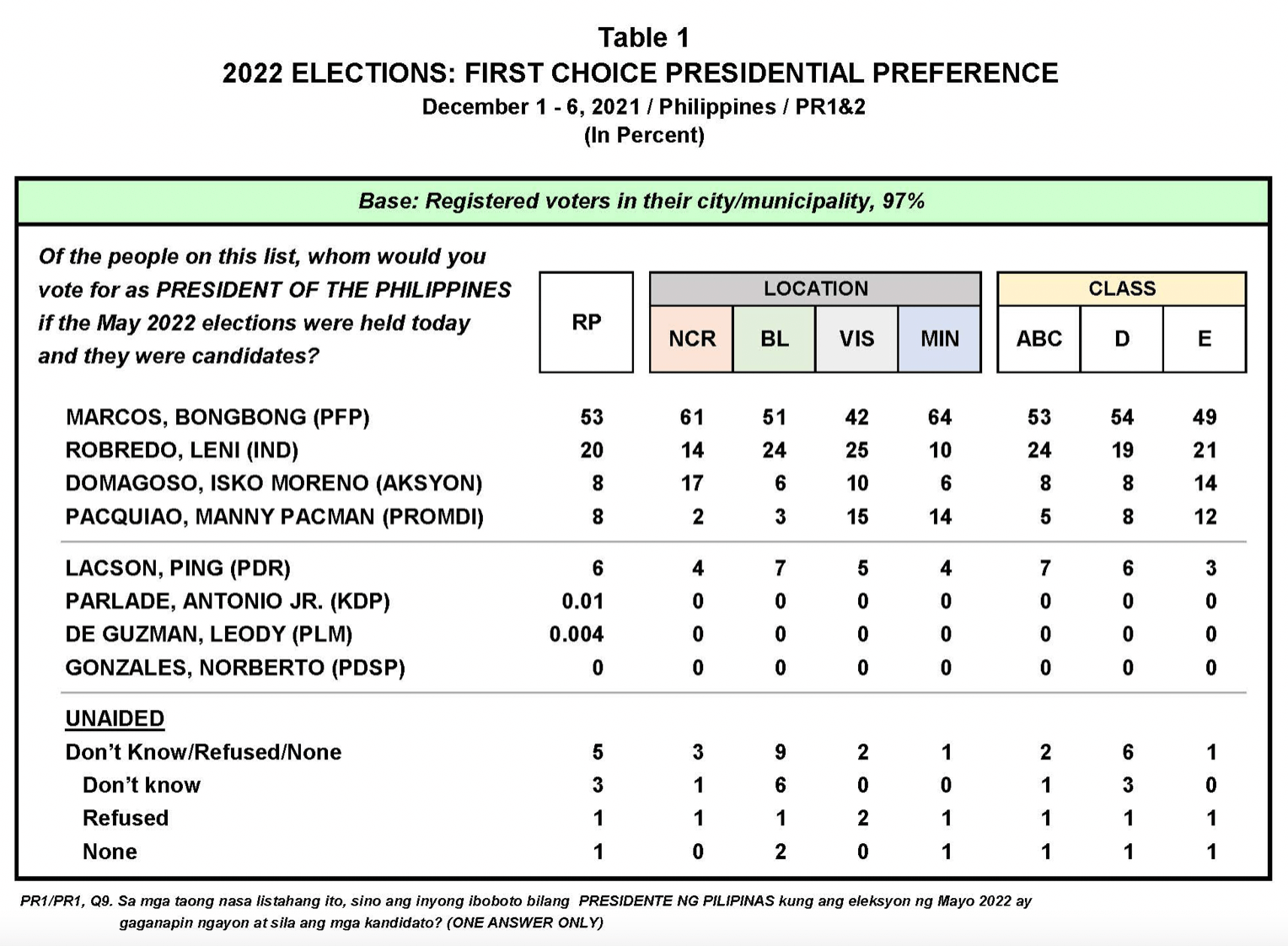 Some 3% of Filipino adults are still undecided on who to vote for president in the 2022 elections.

Who are the Comelec commissioners in charge of the 2022 elections?

About 45% of registered voters would elect Sara Duterte if the elections were held at the time the survey was conducted, according to Pulse Asia.

Duterte declared she had no intention of running for a national position in the 2022 elections, but changed tune, scrapped her reelection bid in Davao City and filed her certificate of candidacy in November and eventually joined forces with Marcos as her running mate. 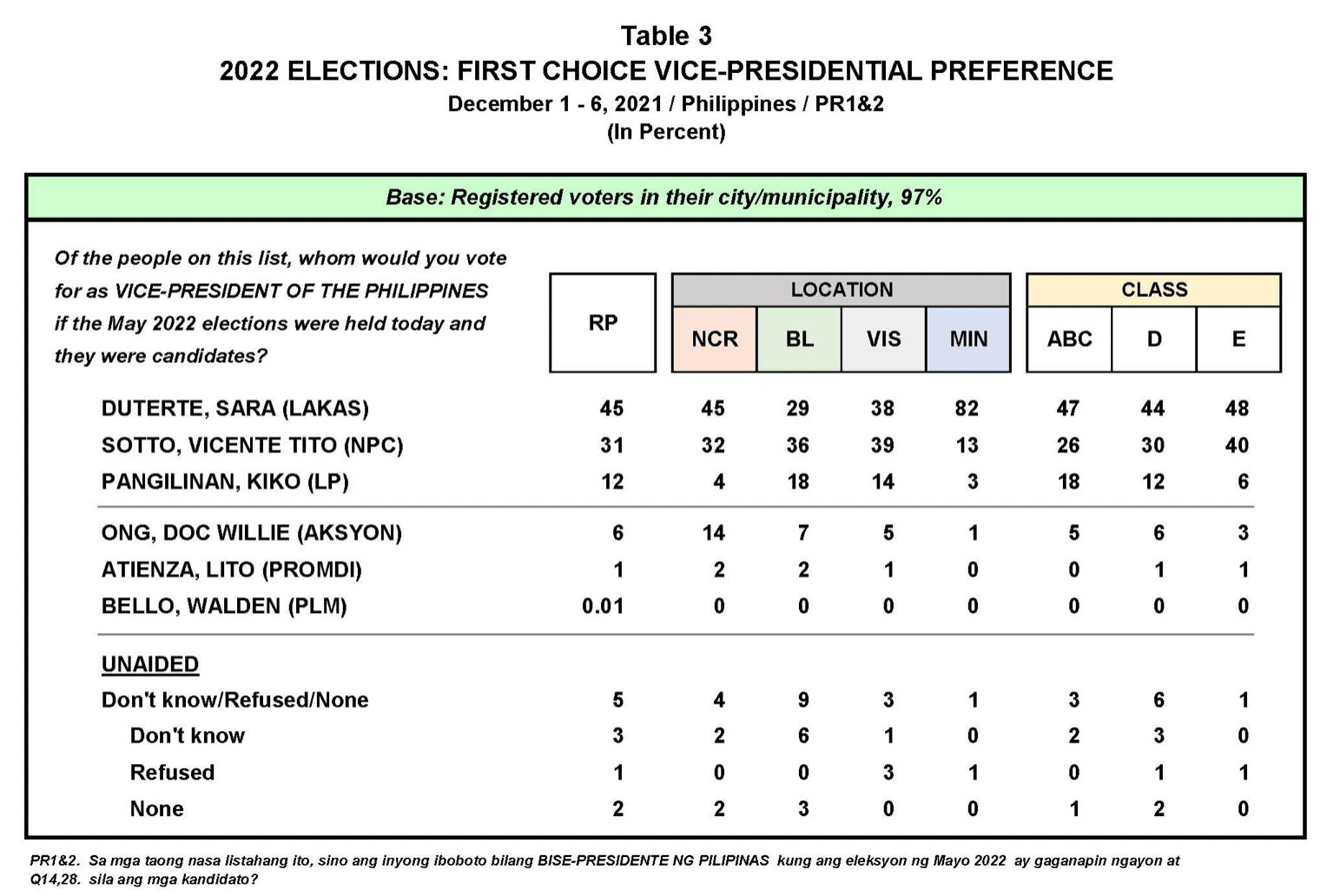 The polls show that the bulk of her supporters naturally came from Mindanao at 82%. She also rated 45% in NCR, 38% in Visayas and 29% in Luzon.

Senate President Vicente Sotto III was backed by 31% of voters, whose support is almost evenly spread out throughout the country. He is also the second-choice vice presidential preference. Senator Francis Pangilinan trails behind at 12%.

It's official: Bongbong Marcos teams up with Sara Duterte-Carpio for 2022 elections

Among the senatorial aspirants, nine of them are either current or former members of the Congress. 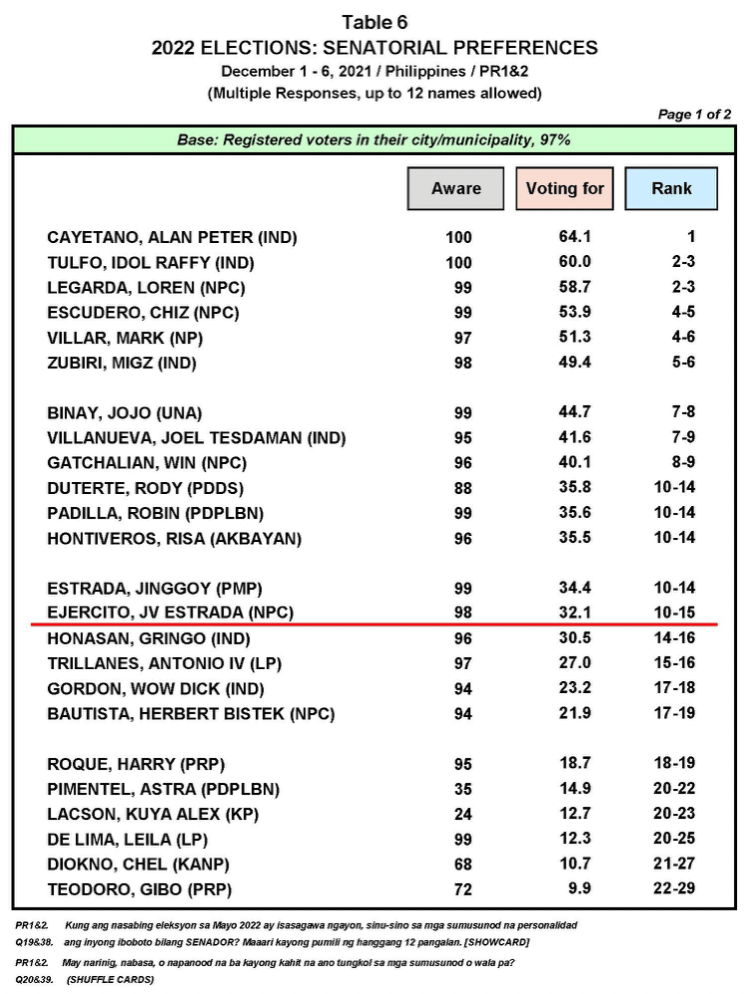 Completing the “Magic 12” most preferred candidates are the following:

According to Pulse Asia, the face-to-face nationwide survey was conducted with 2,400 respondents, 18 years old and above. The survey has a ± 2% error margin at 95% confidence level.