Secretary Carlito Galvez, chief implementer of the National Task Force against COVID-19, will call the shots on the vaccination program.

Aside from his pivotal role as the chief implementer of the National Task Force against COVID-19, Ret. General Carlito Galvez has been tasked to lead the entire vaccination program against the virus.

He was appointed by President Rodrigo Duterte during a meeting at the Malacañang Golf Clubhouse last Monday, November 2, saying, “Pagbili ng bakuna, the negotiation, manufacture, production, or distribution, binigay ko 'yan kay Secretary Galvez." Duterte added that only Sec. Galvez is authorized to “negotiate or whatever,” citing that he does not want to deal with committees because “they take too long.”

Questions were raised at the appointment of Galvez over a medical professional. Presidential Spokesperson Harry Roque explained at a briefing yesterday, Nov. 3, that the vaccine operation will entail logistics because the drug has to be imported, stored in cold-chain facilities and kept frozen during distribution. 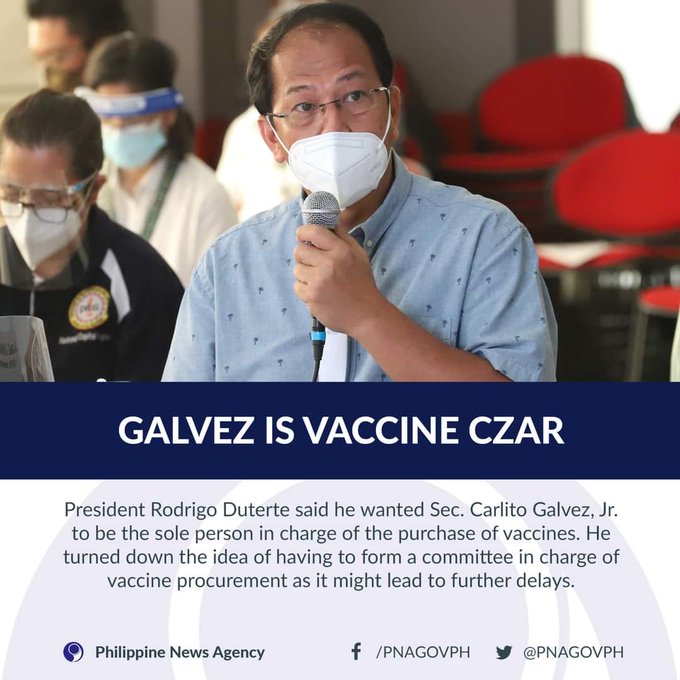 “We really need someone who has managerial skills and is accustomed to these management processes,” he added, partly in Filipino.

In response, Galvez said that as coronavirus vaccine czar, he will be a “milestone keeper, integrator, and synchronizer” of all agencies involved in the distribution of the vaccine.

He assured the public that he will still be following the policies set by the DOH, stating, “My boss is still the DOH Secretary (Francisco Duque III), considering that he is the chairman of the Inter-agency Task Force for the Management of Emerging Infectious Diseases. Whatever his policy is on the vaccine will be implemented by me.”

Whose COVID-19 vaccine will Filipinos trust—the UK, US, Russia or China’s?

Prior to the appointment of Sec. Galvez, the sub-Technical Working Group on Covid-19 vaccine development was headed by the DOST, and it includes other government agencies such as the Department of Health (DOH), the Department of Foreign Affairs (DFA), and the Department of Trade and Industry (DTI). Other members of the sub-TWG include the Food and Drug Administration (FDA) and the Research for Tropical Medicine, both of which are under the DOH; and, the National Development Company (NDC) under the DTI.

As of October, the sub-TWG was already gearing up for the conduct of COVID-19 vaccine phase 3 clinical trials in the country. These are set to begin as soon as the companies that are applying for the trials are able to comply with government requirements.

The DOH has already released this statement on the appointment: “The Department of Health expresses its support on the appointment of Sec. Carlito Galvez as the vaccine czar. We look forward to working closely with him in the rollout of a safe and effective COVID-19 vaccine and we will jointly ensure that it is made accessible to all Filipinos.”

Galvez is a retired 4-star general of the Philippine Army, serving as the presidential adviser on the peace process since 2018. He previously was the chief of staff of the Armed Forces of the Philippines from April to December 2018.

Duterte said only Secretary Galvez is authorized to ‘negotiate or whatever’ in vaccine matters, citing that he does not want to deal with committees because ‘they take too long.’

A graduate of the Philippine Military Academy Sandiwa class of 1985, he is known for his leadership of the AFP Western Mindanao Command during the Battle of Marawi and is a recipient of the United States Eisenhower Fellowships in 2006.

He worked on the peace process with the Moro Islamic Liberation Front in 2015 as co-chairman on the Government of the Philippines Coordinating Committees on the Cessation of Hostilities; as Presidential Peace Adviser on Peace, Reconciliation and Unity led the campaign for the plebiscite and eventual ratification of the Bangsamoro Organic Law (BOL).

He is best remembered as commander of the Western Mindanao Command (WestMinCom) wherein he led the AFP in liberating Marawi City from the hands of the Maute-ASG-ISIS terror group. In his more than 34 years of military service, his time was mostly spent in conflict-affected areas in Mindanao, particularly in the provinces of Basilan and Sulu.Caption

Galvez was also a recipient of the prestigious United States Eisenhower Fellowships in 2006. In 2007, he was awarded one of “The Outstanding Philippine Soldiers (TOPS) by the MetroBank Foundation, Inc. and Rotary Club of Makati Metro. As Commander of the First Scout Ranger Battalion, his unit was adjudged as the Best Scout Ranger Battalion for two consecutive years (2000 and 2001).

A family man, Galvez is married to Marissa Pascua-Galvez, a Philippine Airlines International Flight Purser, and they are have a daughter, Mary Frances Therese.

Claims of an Amanpulo victory party by Marcos Jr. camp called out as fake

Metro Manila, other areas to stay under Alert Level 1 until May 31