From unproven COVID-19 cures, conspiracy theories, lists tagging individuals and institutions as enemies of the state, false information can easily spread to take a life of its own on social media.

How then can the media and the public better navigate this ever-changing and ever-challenging information landscape?

This was the central question that guided the online forum held today, Jan. 29, titled “Facts, Ganern! A PhilSTAR L!fe Convo.”

The discussion was moderated by Philippine Center for Investigative Journalism co-founder Malou Mangahas and Bim Santos, PhilStarL!fe’s Head of News. 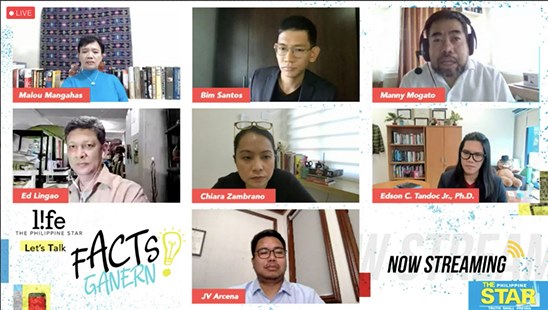 As Tandoc pointed out, the much-debated term “fake news” is nothing new. There have been numerous instances in history where false information has caused an unfavorable societal response, such as the supposed panic that resulted from Orson Welle’s radio broadcast of War of the Worlds in 1938. The term, however, grew more popular recently after 2016, as former US President Trump often used the disparaging term to discredit the media.

With online platforms and messaging apps in mainstream use, there is now an ecosystem of misinformation and disinformation. Tandoc said that disinformation has now been weaponized with the end goal of profiting from it, or pushing an agenda or ideology with a political interest.

The danger, Zambrano pointed out, is that it has been used to intentionally discredit legitimate information sources.

“The fact that the term is now being used loosely by people means that the idea has already been planted and its damage has been taking effect. This is used to the advantage of those spreading the fake news. Through destroying the media’s reputation, who will the people believe? Paniniwalaan nila ang boses na malakas,” she said.

For his part, Arcena denied his office’s involvement in any disinformation efforts and proliferation of fake news, adding that they also do not employ troll farms and purveyors of fake news.

“Joke Only”
Fact-checking, of course, can ward off false information. So how can a reporter fact-check a source, such as the President himself, who has been prone to say erroneous statements under the guise of a joke?

Just a few of President Rodrigo Duterte's controversial pronouncements include cleaning face masks with gasoline, selling assets to be able to afford COVID-19 vaccines, and even using marijuana to keep himself awake that were all followed by statements that he was “just joking.”

To this, the panelists said that it is the job of the journalist to add context, even if it is just one line that will help connect the statement to the story.

Tandoc also questioned the practice of airing a late night press conference, which Duterte has been used to doing, “If it is also not important, why broadcast something very late at night instead of coming out with the story the next day alongside verified information?”

As to the controversial list released by the military that red-tagged personalities, Mogato and Zambrano said that the only solution was to double check with the personalities who were named or at least wait for them to come out with their own statement.

Tandoc also floated the idea of revisiting the media's obsession of scoring scoops to outdo the competition, which sometimes comes at the expense of accuracy.

The journalists said that the most effective weapon is still to hold those spreading disinformation accountable. Lingao said there are even legal safeguards against government officials spreading fake news, such as the Code of Conduct for Public Officials and the Revised Penal Code that has an entry on spreading false news.

While calling out those creating disinformation, it is also our duty to help stop its spread. It is also about educating those who are close to us, such as our own titos and titas, who may be misled and believe that anything they read online is true.

You can watch the entire talk in the video below.