It turns out, questions surrounding Bongbong Marcos' academic credentials dates as far back to 1983—as a sister from the Religious of the Good Shepherd in the Philippines wrote a letter to Oxford University and received a response from the prestigious university in April of that year.

"Ferdinand Martin Romualdez Marcos matriculated in 1975 at St. Edmund Hall, University of Oxford, to read Politics, Philosophy and Economics. He did not however complete his Preliminary examinations and is not therefore a graduate of this University. It follows that he does not hold any degree," the letter read.

It also indicated that the presidential candidate was awarded a special diploma in Social Studies in 1978.

RGS shared that the letter was written after Marcos assumed the role of governor of Ilocos Norte in 1983. The query was prompted after the sender, who was a sister on retreat, came across a "deeply disturbing" news clipping regarding the politician.

This October, Filipinos have also checked in with Oxford directly, sending inquiries via email. A number of users, including local media outlets, received a response similar to the 1983 letter. PhilSTAR L!fe has also inquired with the university's alumni and registrar offices.

"According to our records, he did not complete his degree, but was awarded a Special Diploma in Social Studies in 1978," the university's Information Compliance Team said in response to L!fe's inquiry. 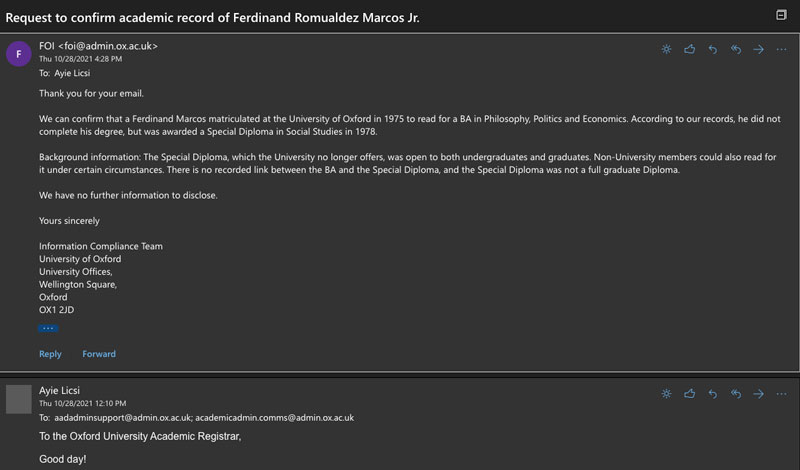 It emphasized that the special diploma does not equate to a "full graduate Diploma."

The Oxford University confirmed that former Senator Bongbong Marcos Jr. did not complete his BA in Philosophy, Politics and Economics degree, but was awarded a Special Diploma in Social Studies in 1978. @gmanews pic.twitter.com/xZrqS1I94o

So yep, I also emailed Oxford University ?‍♀️ & apparently, Ferdinand Marcos Jr. did study at Oxford Univ. but he didn't finish his degree, so he was awarded a special diploma.

Marcos' camp has yet responded to these new developments. On Oct. 23, his chief of staff Atty. Victor Rodriguez issued a statement saying the former senator "never misrepresented" his Oxford education and said people can "question or challenge this with the said university if they so please."

This came after the Oxford Philippine Society, on Oct. 22, released a statement on misinformation about Marcos' academic qualifications, clarifying that Marcos' special diploma is neither "comparable, superior, nor equivalent" to a degree.

Will it be a Leni-Bongbong fight again in 2022?