Chinese singer and actress Meng Jia, who was formerly a member of the South Korean girl group Miss A, has apologized after netizens called out her recent album cover as having the same concept from an Italian model.

The provocative concept even caused quite a stir, leading the singer to issue a statement.

“A lot of people say I’m trying too hard by going topless! But when I wrote this song, I couldn’t think of any outfit or style to express it. I am not ashamed to show off my figure in a tasteful manner. I am happy with the result,” Meng Jian said.

But as is the case with social media, no good deed ever unpunished.

The controversy took on another chapter as people pointed out that her concept was an exact copy of a shoot featuring an Italian model named Sasha Barss taken Oct. 28, 2019.

You can see the original shoot below on Instagram, which now has a number of Chinese comments.

Netizens quickly relayed the issue to Barss, which she answered in a statement posted on her Instagram story.

“Hi to all new followers! Thank you for letting me know about the incident with Mengjia’s album cover. Right now I’m receiving many messages from you asking if her team really contacted me - no they didn’t,” said Barss. 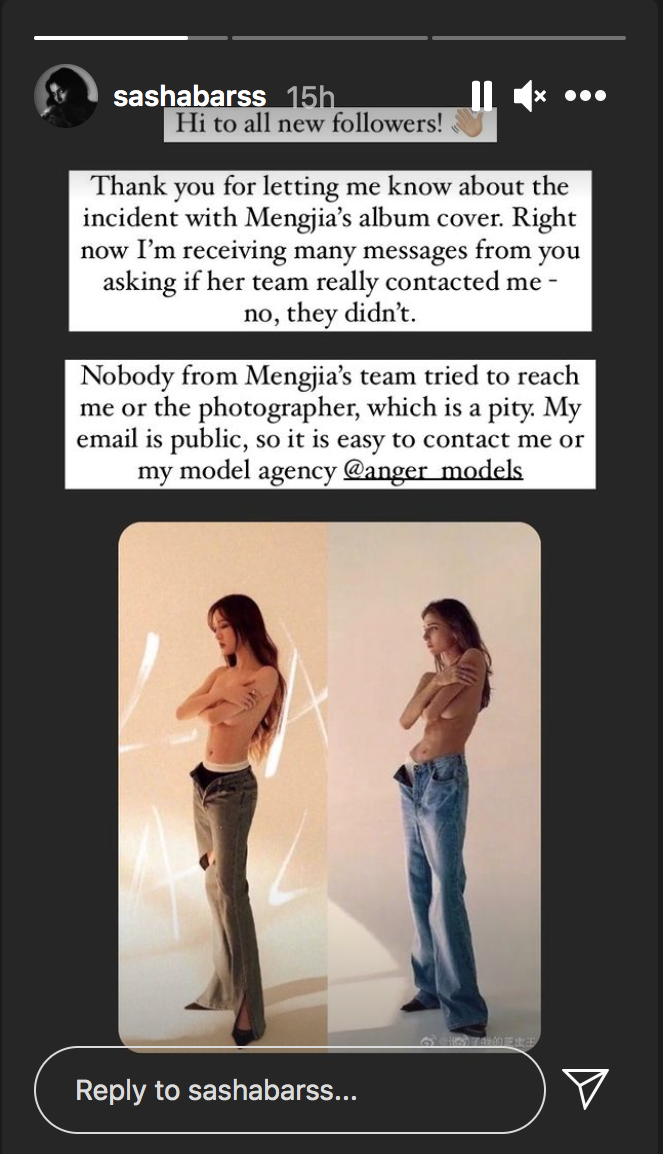 “Nobody from Mengjia’s team tried to reach me or the photographer, which is a pity. My email is public, so it’s easy to contact me or my model agency,” added Barss.

After the issue blew up, Meng Jia’s studio issued an apology.

According to the studio, the photo of Barss was indeed used as a reference, but Meng Jia did not know, though she approved the concept. The studio staff acknowledged the similarity, though they didn’t inform Meng Jia during the shoot of the risk. The studio apologized to the fans and said they will reach out to the original creator to discuss compensation.

On Weibo, Meng Jia also apologized for the incident.

Later on, Barss said on her Instagram that Meng Jia’s has indeed reached out.