In the statement, Parlade, also the commander of the Southern Luzon Command of the Philippine Army, said, “Let us not red-tag Liza Soberano. It’s not fair to her. She is merely supporting advocacy for women's rights. She has to be protected in the exercise of her rights. Is she an NPA? No, of course not. Not yet.” 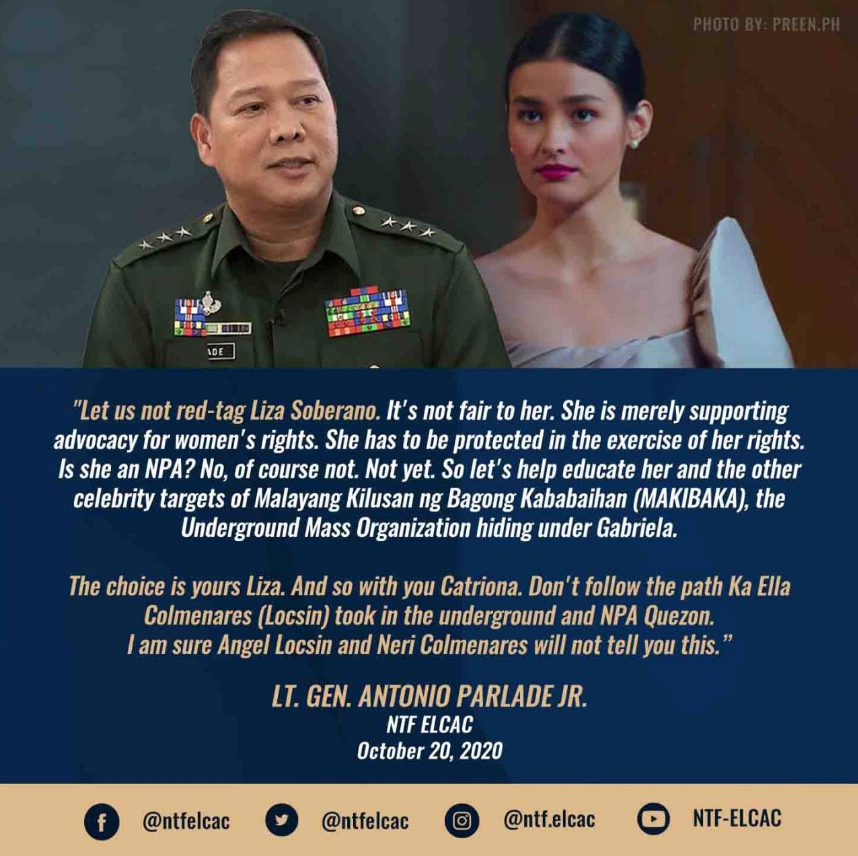 Parlade, the spokesperson of NTF-ELCAC, continued, “Liza Soberano, there' s still a chance to abdicate that group. If you don't, you will suffer the same fate as Josephine Anne Lapira.”

“It's a pity she (Lapira) learned about nonsense things like nabbing a firearm, exploitation while already inside the underground. It was too late she is dead,” said Parlade.

Josephine “Jo” Lapira was a 22-year-old UP Manila student who was one of the fatalities in the encounter between government troops and the communist New People’s Army in Nasugbu Batangas in 2017. She served as secretary general and deputy secretary general of Gabriela Youth in UP Manila.

In the same statement, Parlade, who is known for tagging left-leaning organizations and individuals as members of the communist rebels, warned Soberano and Miss Universe 2018 Catriona Gray (known to have voiced out her opinions against the passing of the Anti-Terrorism Act and the government's ABS-CBN shut down) not to support other rights groups like how actress Angel Locsin and her sister Ella Colmenares are doing.

Soberano recently appeared as a guest speaker at an online event organized by Gabriela Youth where she spoke about “tragedies and hardships happening not only to women and children but to a lot of people in general.”

“The norm of society has conditioned women and children to stay quiet when dealing with hardships and struggles because nobody is going to do anything anyway. Yet why do they also expect us women and children, to remain resilient through these struggles?” Soberano said in her speech.

Following Soberano’s appearance in the event, a certain vlogger named Maui Vega posted a video on her YouTube channel with the title “Liza Soberano, miyembro an ng New People’s Army?” and with a live stream caption that read “Kapamilya actress Liza Soberano joins Gabriela Youth, a front of the communists!”

Netizens were quick to react and made #DefendLizaSoberano hashtag trend on Twitter to support Soberano in the  alleged red tagging by the vlogger.

Leni Robredo camp raises no objection to canvassing of votes, 'to accept the decision of the majority'