President Rodrigo Duterte has declared a 10-day period of national mourning from June 24 to July 3 over the passing of former president Benigno "Noynoy" Aquino III.

"The national flag shall be flown at half-mast from sunrise to sunset on all government buildings and installations throughout the Philippines and abroad for a period of ten days," Roque said.

"Let us continue to pray and pay respects to the former president who gave his best to serve our nation and our people," Roque added.

Duterte also earlier issued a statement asking Filipinos to set aside differences to honor the memory of his late predecessor.

“I express my deepest sympathies to his siblings, Ballsy, Pinky, Viel, and Kris, as well as to all his loved ones, friends and supporters, in this period of sadness," Duterte said. “May you take comfort in the knowledge that he is now in a better place with his Creator.”

Duterte also asked Filipinos to “unite in prayer and set aside our differences.” Duterte, who clashed with his predecessor, also commemorated the legacy of the Aquino family.

“His memory and his family’s legacy of offering their lives for the cause of democracy will forever remain etched in our hearts.” 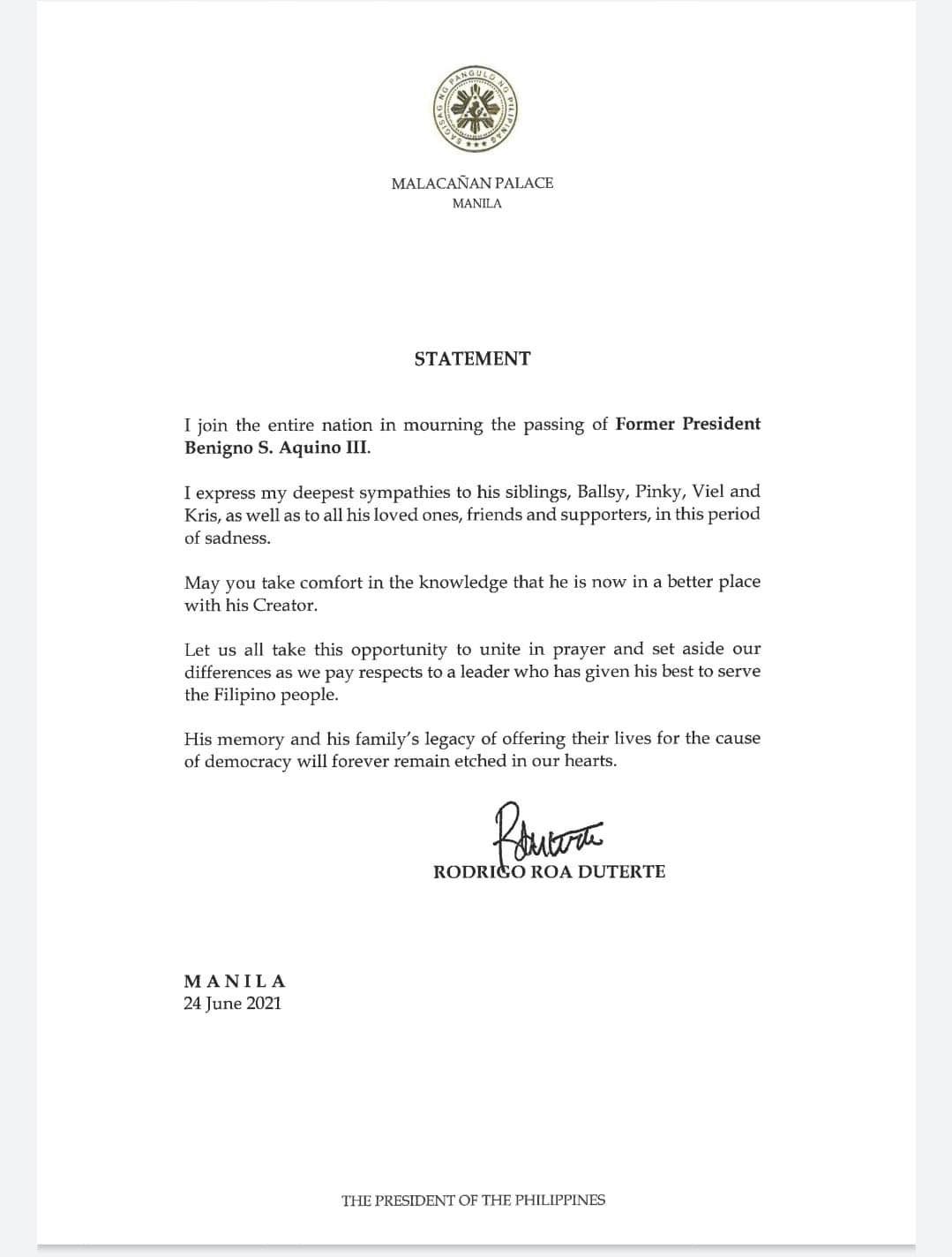 Here's why we lower Philippine flags at 'half-mast' when mourning

Earlier in the day, Roque offered a moment of silence for the passing of the former president during the televised press briefing.

"We commiserate and condole with the family and loved ones of Benigno Simeon Aquino III as we extend our condolences on his untimely demise," Roque said.

"We’re grateful for the former president for his contribution and former services to the country and we ask our people to offer a prayer for the eternal repose of our former Chief Executive,”

Vice President Leni Robredo also shared how she and the former president grew to be friends amid the passing of her husband, Jesse Robredo.

“It has been my greatest honor to have worked with him, even only for a while. It was a blessing to be his friend,” the Vice President had shared.

'It was a blessing to be his friend:' Leni Robredo shares how Noynoy aided her through husband Jesse's death

The Aquino family had confirmed that Noynoy had passed away peacefully in his sleep at around 6:30 AM on the morning of Thursday, June 24. The cause of death is “renal disease secondary to diabetes.” Aquino was 61.