It has been a crazy six years.

Rodrigo Roa Duterte, former Mayor of Davao known for his war against drugs, was sworn to presidency the same year I chose to pursue the liberal arts.

The year 2016 was a very crucial time for me. As part of the pioneer batch of the new K to 12 curriculum, it was nerve-wracking. Choosing a strand that you will be stuck in for two years would either give you the certainty that you are choosing the right track for you before entering college or leave you with more questions unanswered as to what you really want to do moving forward. Luckily for me, I was the former.

Studying as a senior high school student in the Humanities and Social Sciences strand while the country entered a new administration felt like it was just the right timing. I was a probinsyana suddenly diving into the Metro Manila lifestyle, where socio-political matters were more palpable and evident. Being surrounded by individuals who were open-minded and vocal in providing different perspectives on things allowed me to see society through a new lens, bursting my bubble of naivety.

Amid reports of journalist killings, it was rather brave of me to choose journalism as my undergraduate program once I graduated from senior high. Then in 2016, Duterte, then president-elect, said most slain journalists only have themselves to blame.

The next four years of college went by in a flash. It was fulfilling, learning from my professors who are renowned journalists in the industry, and also being able to be part of my university's official student publication. It was thrilling to be a part of something larger than myself and be able to get a glimpse of how journalism is in the real world.

Graduates: What to do when life gives you lemons and you run out of tequila

Every day before and after classes, I would probably be seen roaming around the campus doing legwork and scheduling interviews with my sources. Oftentimes, I'd be able to even get the chance to meet other renowned people in the media whom I never thought I'd be able to meet in this lifetime. But despite all that, the threats against the industry looms even more. 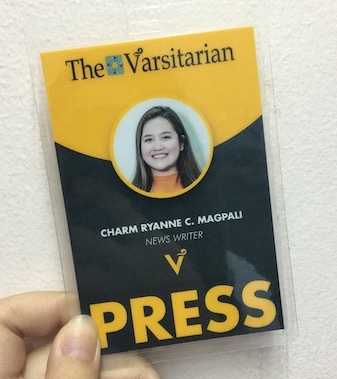 As a a journalism student, I saw how the attacks grew larger than it was when I was just a senior high school student choosing my course options for college. Now, criminal charges, death threats and online trolling have become something many journalists have to face on a regular basis.

Then came the COVID-19 pandemic. Suddenly, the world was forced to shut down, and the media was struck hard. Legworks were halted because of social distancing protocols and travel restrictions. Zoom meeting interviews and live-streamed press conferences became the new norm. Technological limitations and difficulties became a hindrance, especially when reaching out to sources or verifying information.

It was disheartening to watch the media as a whole struggle as well. I could only imagine how much more difficult it was for actual journalists in the field to source out information and adjust to what was then becoming the "new normal," even more when attacks on the media were already becoming more palpable.

According to the Philippine Center for Investigative Journalism (PCIJ), there were 223 cases of attacks and threats against members of the Philippine media since Duterte assumed office in 2016 until April of 2021, 114 of which were linked to state agents such as the police and the military as well as local and national government officials.

As hard and gut-wrenching as it is to look back at the events and the numbers presenting the harsh truths of being a member of the press, perhaps there is still a certain pride that comes with being a journalism student or more so, as a journalist nowadays.

A few months ago, I was so sure as to where I'll go next once I graduated. However, observing the country's political landscape during the election season left me questioning myself.

I wouldn't say that I was the epitome of a budding journalist, ready to get to work and do beyond what a student journalist is expected, but other journalists, student or professional, and I have proven ourselves to be capable of making the most out of the situation, as difficult as it may have been. It is a testament, really, to the unwavering dedication of journalists to tell stories that matter and hold those in power to account no matter what the situation.

It is hard for me to pinpoint where exactly my feelings lie now as I finished four years of college in the journalism program. On the one hand, it feels fulfilling to come out of the challenges we've faced stronger and ready to take on the responsibility to be a part of the press. But on the other hand, it also feels terrifying to finally leave the four walls of our classrooms and finally dive into the real world of journalism under a new administration where the spread of misinformation and historical revisionism have increased. It may be difficult for new journalists moving forward, not just with how journalists are physically treated by those soon to be in power, but how they are also being delegitimized in favor of vloggers who may have different purposes and loyalties.

Vlogging most foul: When pictures paint a thousand lies

Honestly though, I cannot speak on behalf of other journalists, as I have now choosen a different career after college. However, as I was applying to law school, which coincided with the election campaigns and rallies, I found myself back in the shoes of my classmates back in senior high who were left questioning themselves and their next course of action. A few months ago, I was so sure as to where I'll go next once I graduated. However, observing the country's political landscape during the election season left me questioning myself.

During the 2022 election campaign season, PCIJ has listed around 24 attacks on media, including killings and slay attempts, Distributed Denial of Service (DDoS) attacks, libel and death threats, red-tagging, harassment, barring of media coverage and even deflecting questions raised by journalists during press conferences. Among the targets were not just mainstream media organizations, but also independent and community press outlets, mostly those covering the campaign of president-elect Bongbong Marcos.

A part of my heart will always belong to journalism, and I hope this feeling I have is shared by my fellow graduates and even the next graduates that will follow in the future.

There was a part of me that felt like I've somehow betrayed my fellow aspiring journalists when we needed as many hands as possible in the field now, my professors who've worked hard teaching me what it is that I need to know, and the field that I gave four years of my life to. Going to law school wouldn't mean I'll give up everything I've learned and flush it down the drain, sure. But moving on from those four years of learning and experience with a different career in mind, amidst everything that happened and is yet to happen, left me feeling a little lost and confused.

Bouts of existential crisis and self-conversations later, I came to the realization that entering a new field doesn't mean I'm leaving behind journalism. Yes, I wouldn't be doing beat coverage and interviews most of my days in the next four years like my colleagues, but in that time, I would also be studying about a tumultuous part of our democratic society as Filipinos and making sure we do not repeat the same mistakes we did in matters of the law.

In the next six years, we may see more attacks on truth and our fundamental freedoms and rights that stretch farther than that of the media’s, and I hope to God that whether we choose to stay on the field or pursue something else, our journalistic roots and experiences guide us and how we stand for one another in a time that will test our strengths amid the rewriting of our very own history.

And so I ask myself, where do I go next as a journalism graduate?

I do believe that no matter what happens and how long it may take, I will still find my way in this career in one way or another, may it be directly participating in news writing once more or providing assistance to my fellow journalists in the legal sense. A part of my heart will always belong to journalism, and I hope this feeling I have is shared by my fellow graduates and even the next graduates that will follow in the future. Whether you stay in the field or choose something a little bit different like I do, I hope we'll always hold the line, as Philippine journalism needs all our unconditional support now more than ever.

A journalism graduate from the University of Santo Tomas, Charm Magpali writes about news, arts and culture at her university’s official student publication, The Varsitarian. In her free time, she enjoys film, music, and baking.