The Commission on Elections, sitting as the National Board of Canvassers (NBOC), has proclaimed the 2022 elections' 12 winning senators on May 18 at the Philippine International Convention Center in Pasay City.

The country's 12 new senators will be inaugurated on June 30, alongside other election winners. Let's get to know the country's newest lawmakers.

Working as an actor since 1985, Robin Padilla received the most votes among the 64 candidates with over 26 million. Prior to running for senator, he served as a chairperson of the strategic communications arm of the Philippine Army Multi-Sectoral Advisory Board.

Padilla was granted absolute pardon by close ally President Rodrigo Duterte from his 1994 conviction for illegal firearm possession in 2016. He is also a supporter of the president's bloody drug war. 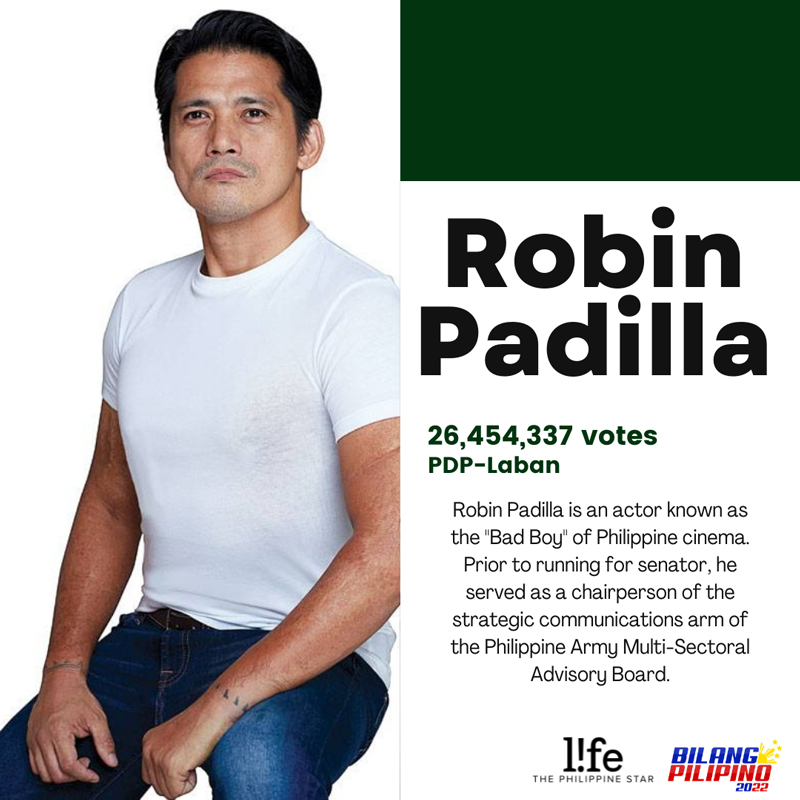 Loren Legarda is a broadcast journalist and environmentalist with over 30 years of experience in Congress. In her three non-consecutive terms in the Senate, she authored the Climate change Act of 2019, the Expanded National Integrated Protected Areas System Act of 2018, and the Unified Student Financial Assistance System for Tertiary Education Act. 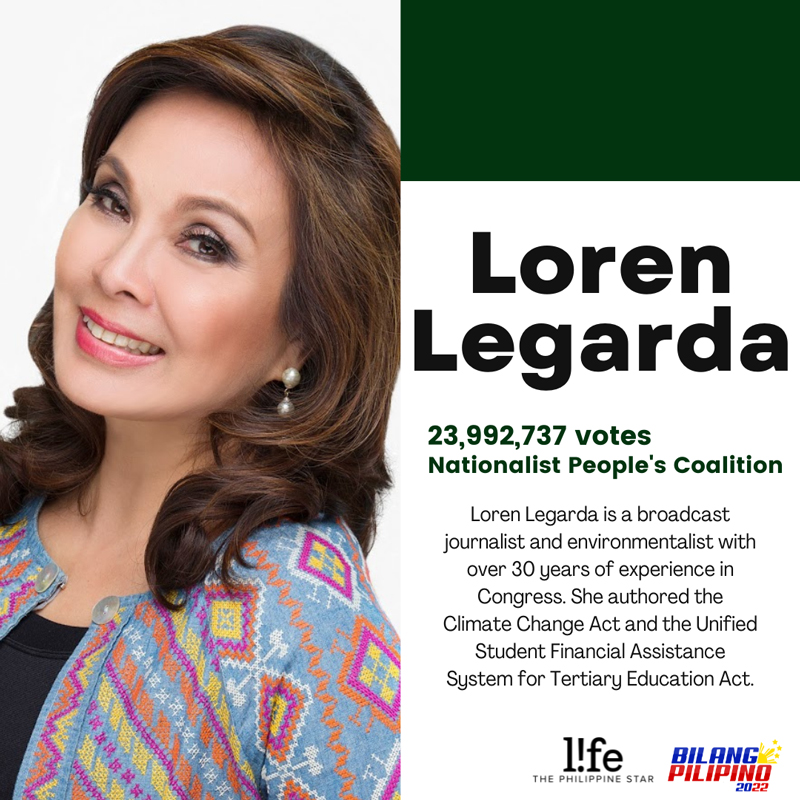 Known for his radio programs Idol in Action and Wanted sa Radyo, Raffy Tulfo worked as a broadcast journalist alongside brothers Ramon, Ben, and Erwin. His listeners regularly call in to his broadcasts to ask for help resolving concerns such as social injustices and relationship squabbles. 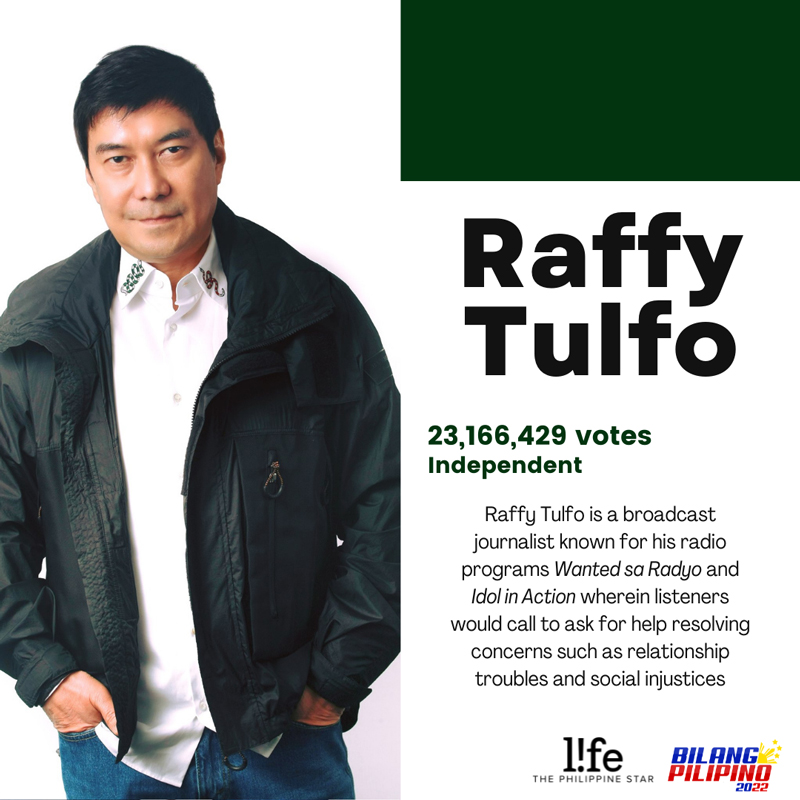 Previously serving as the mayor of Valenzuela City, Win Gatchalian is a businessman who has served his first term in the Senate. With a focus on basic education and energy, Gatchalian authored 12 laws, including the Philippine Energy Research and Policy Institute Act, the Alternative Learning System Act, the Microgrid Systems Act, and the Energy Virtual One-Stop Shop Act. 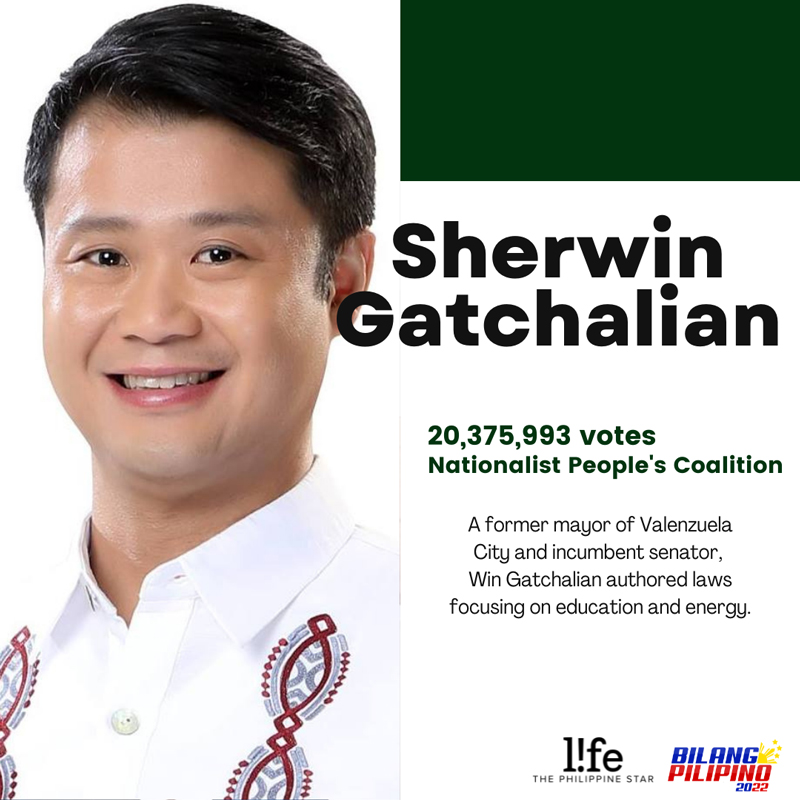 Born to a family of Sorsogon politcians, Chiz Escudero has served in both chambers of Congress. He has previously been in the Senate for two terms, authoring and sponsoring laws such as the Anti-Enforced or Involuntary Disappearance Act and the Anti-Torture Act.

Escudero is also married to actress and socialite Heart Evangelista. 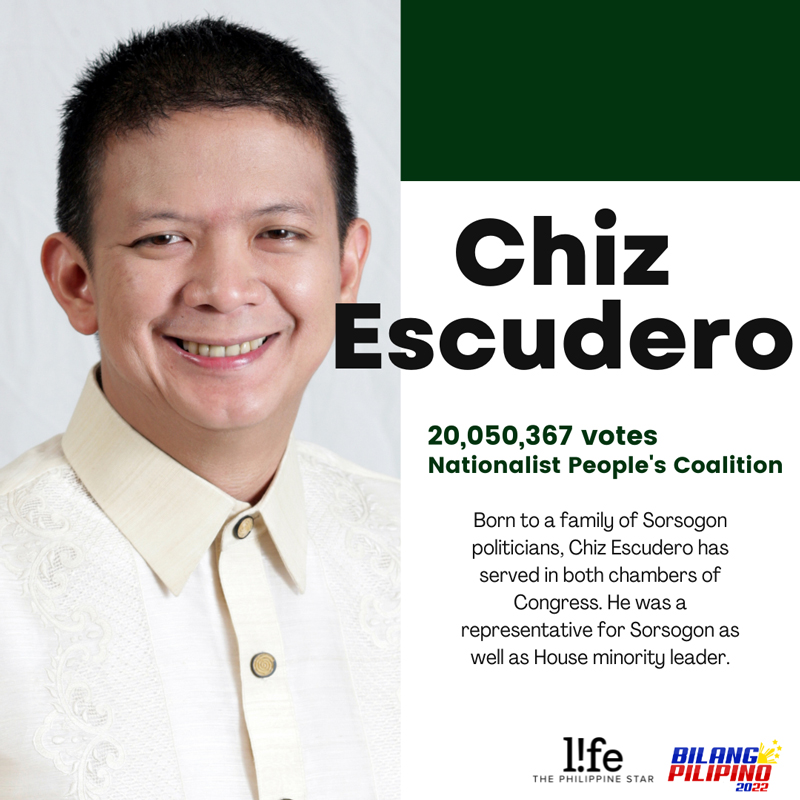 Mark Villar is a former Department of Public Works and Highway secretary under the Duterte administration and is known for helping facilitate the ambitious Build, Build, Build program.

Villar is the son of tycoon Manny Villar and Senator Cynthia. 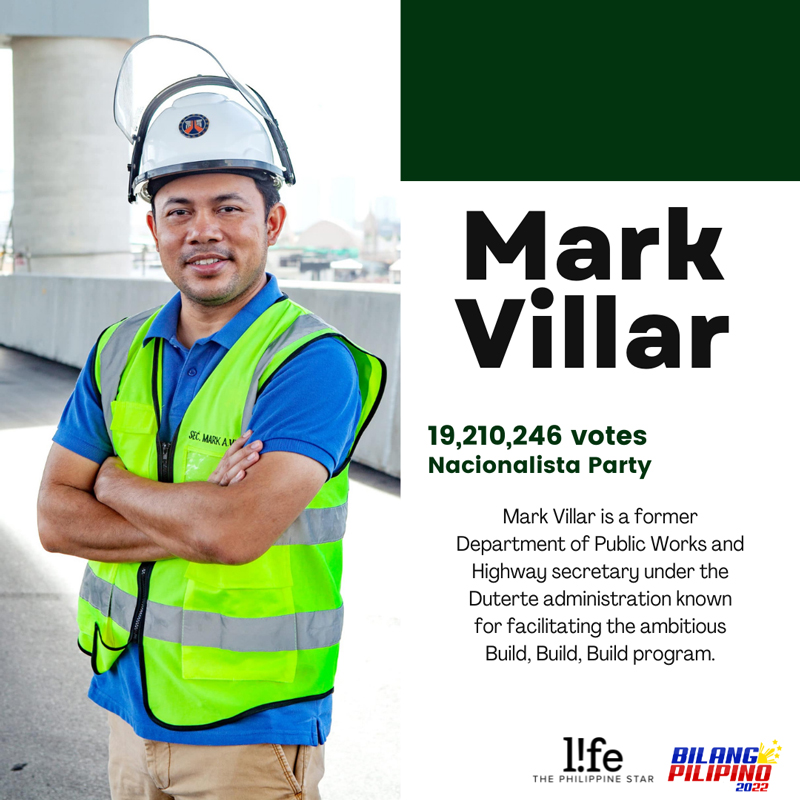 Taguig-Pateros first district representative Alan Peter Cayetano was elected House Speaker from 2019 to 2020. Under his term, he faced the controversial denial of the ABS-CBN franchise, when 70 members under the House Committee on Legislative Franchises voted not to renew the franchise of the media giant.

He also chaired the organizing committee for the 2019 Southeast Asian Games, which also drew criticisms for the construction of a P50-million cauldron. Cayetano said the project was funded by the private sector.

Cayetano also principally authored pandemic response laws Bayanihan 1 and 2 as well as led the passage of the controversial Anti-Terrorism Act. 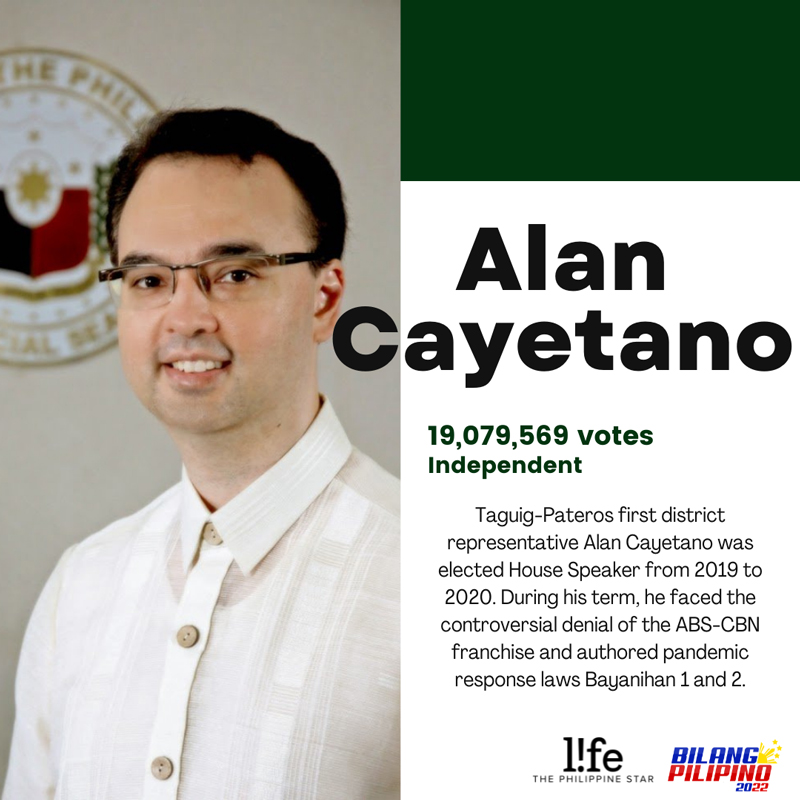 After Congress proclaims the winners, here's how a president-elect transitions into power

Another candidate who sought reelection, Migz Zubiri hails from a formidable political clan in Mindanao. The Senate majority leader since 2018, he has authored 16 laws and voted to extend martial law in Mindanao in 2019. 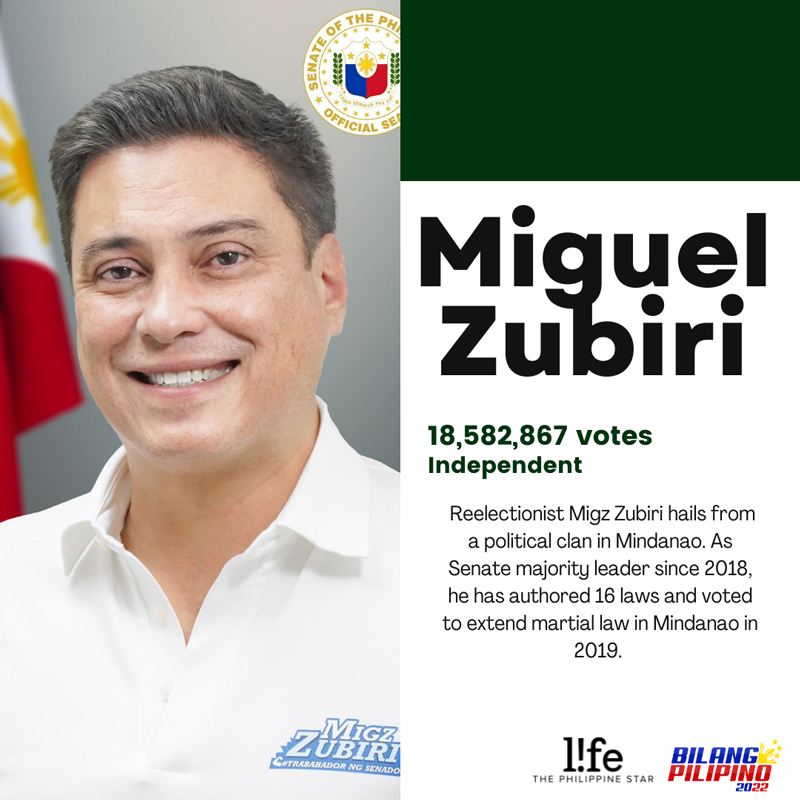 Joel Villanueva, nicknamed "Tesdaman," is an incumbent senator. He was appointed head of TESDA from 2010 to 2015, during which he implemented the agency's online program. As senator, Villanueva authored laws on education and labor, including the Telecommuting Act. 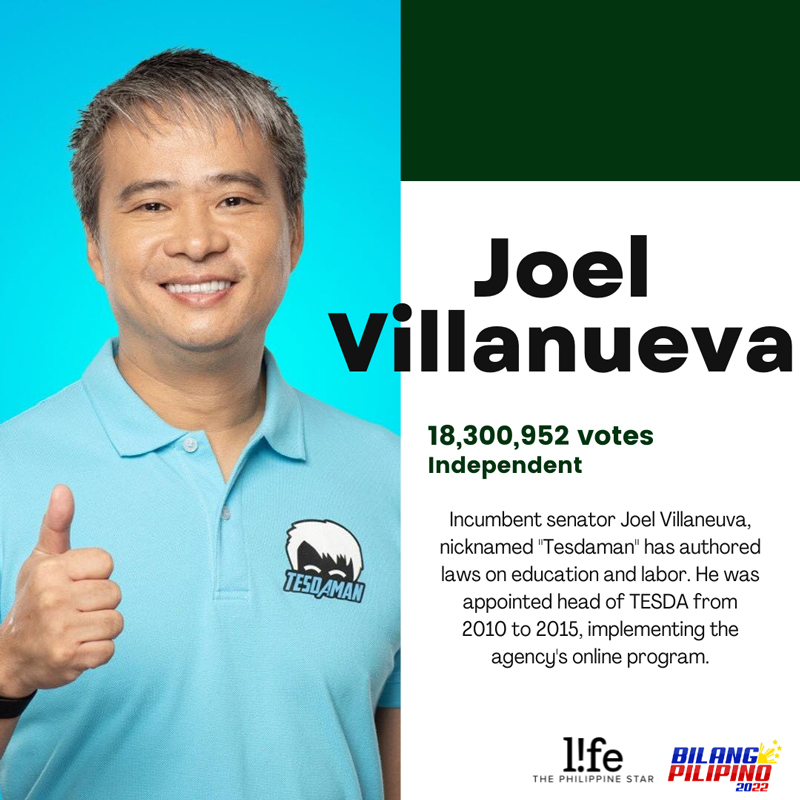 Son of former president Joseph Estrada, JV Ejercito has previously served one term in the Senate from 2013 to 2019 and as the representative of San Juan from 2010 to 2013. He is the principal sponsor and author of the Universal Healthcare Act and he pushed for the Kasambahay Act with his half-brother Jinggoy Estrada.

In 2014, he signed a committee report on the pork barrel scam against Sen. Bong Revilla, Juan Ponce Enrile, and his half-brother Estrada, which fueled animosity between them. 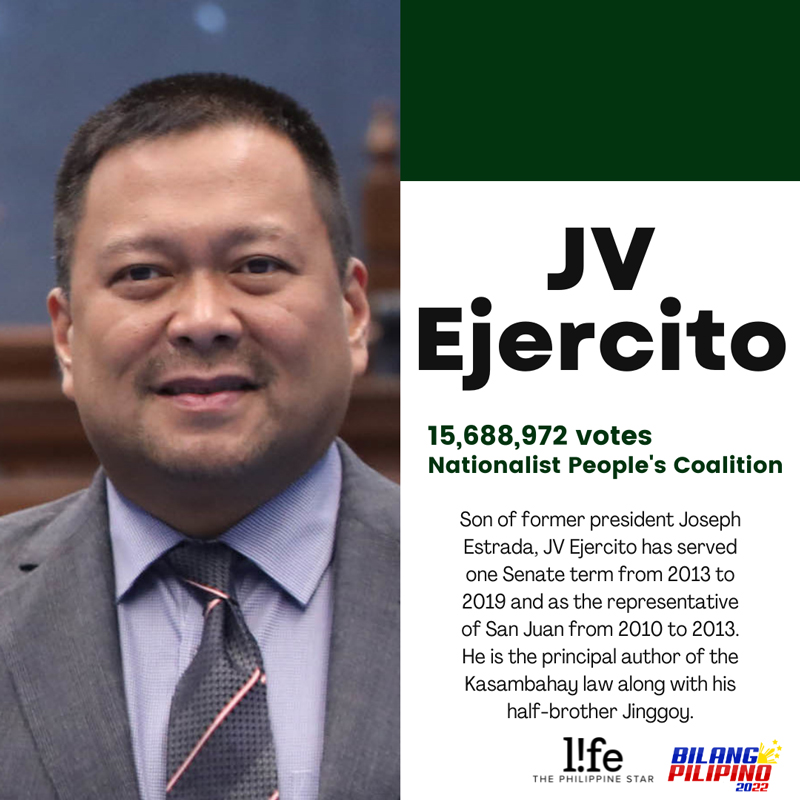 The lone opposition in the Magic 12—and the 24-member Senate—Risa Hontiveros has served in Congress for more than 11 years. As senator, she authored laws on mental health, healthcare, women, children, and persons with disability.

Hontiveros is the proponent of the Sexual Orientation and Gender Identity Expression (SOGIE) Equality Bill and is the first senator from the Akbayan partylist. She's also known for opposing Duterte's war on drugs and the re-imposition of the death penalty. 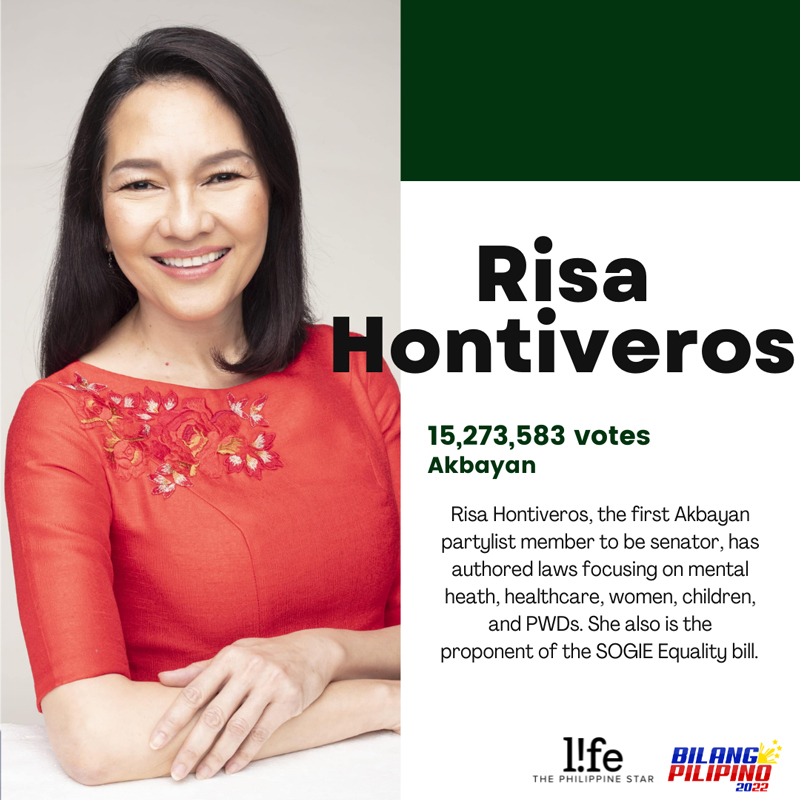 Jinggoy Estrada, the half-brother of JV, makes his return to the Senate in 2022 after previously serving for two terms. He authored 20 laws, including the Kasambahay Act, and was a former Senate president pro tempore.

Estrada was charged in 2014 for plunder and several counts of graft. He allegedly received at least P183 million in kickbacks from the Priority Development Assistance Fund (PDAF) scam. He was also arrested for allegedly violating lockdown in San Juan in 2020. 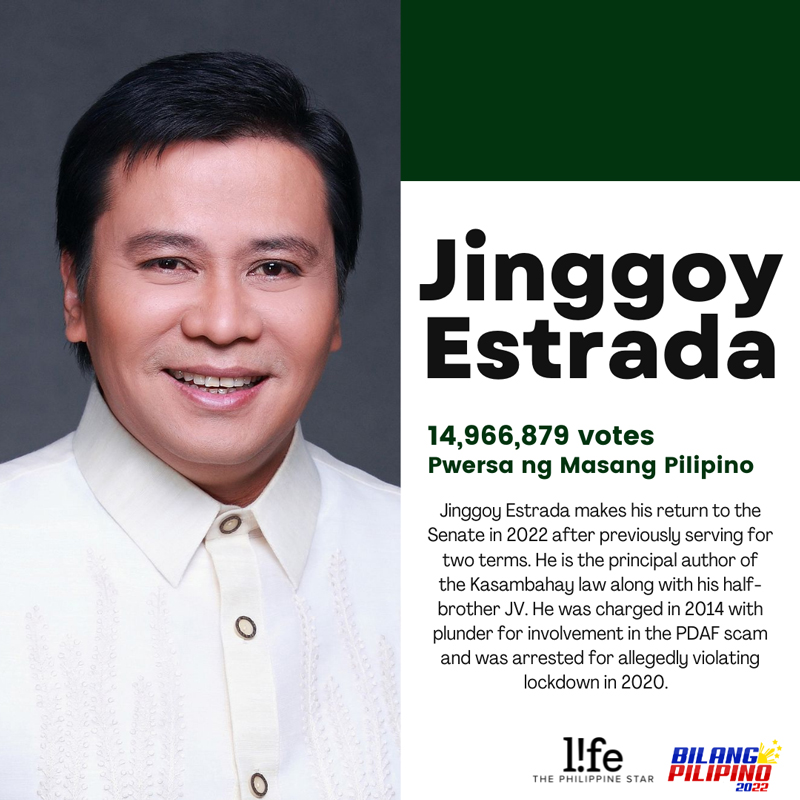 Is Nutribun the brainchild of Ferdinand Marcos Sr.?

LOOK: With no laptop available, Pinoy students get creative in class with pop-up book presentation