Style Living Self Geeky News and Views
In the Paper Shop Hello! Create with us
Courtesy of Ed Simon of BluPrint and Ed Calma

In every generation, there is always at least one individual who trailblazes ideas, influencing everyone that follows.

In the ‘60s, ‘70s and ‘80s, one design luminary stood out in the field of architecture and the allied arts, a genuine creative spirit: architect Lor Calma.

“Every space has to have an element of surprise,” Lor said, referencing an integrative professional stamp that combines his work with fine arts, site planning, lighting and framing of views in windows and glass walls.

Every space has to have an element of surprise.

Lor’s impact extends even beyond these decades, with many aspiring individuals in the field of contemporary design embracing and drawing inspiration from his modernist ideas and principles up to the present. It was he who established the Calma name in the building industry, allowing a family brand to flourish. His son Eduardo “Ed” Calma takes the name further on, clearly guided and mentored by one of the quiet yet pioneering influences our country has ever seen.

Ed says, “He always told me to be simple with the design and he emphasized detail to bring materiality of the design to a different level of appreciation.”

His father, he continues, “is an international modernist who integrates elements of local materials , culture , and local craft to anchor the design to its place. He is one of only a few architects I know locally who works in multiple scales—from architecture to interiors, furniture, art & decor, and jewelry.

Many years ago Lor started sculpting and designing jewelry. Ed says he constantly “adopts to new technology and design directions but his underpinnings as an architect remain.”

Indeed, Lor’s consistent design narrative is best expressed in architecture. Many of his sterling achievements still stand though some, especially the old residences in gated villages, have given way to the demands of the new property owners.

There is simplicity in his execution and a distinct style that stems from avoiding ornamentation and developing a strong point of view in each project. His creative vocabulary speaks of an international character yet local influences especially in materiality are very important to him. 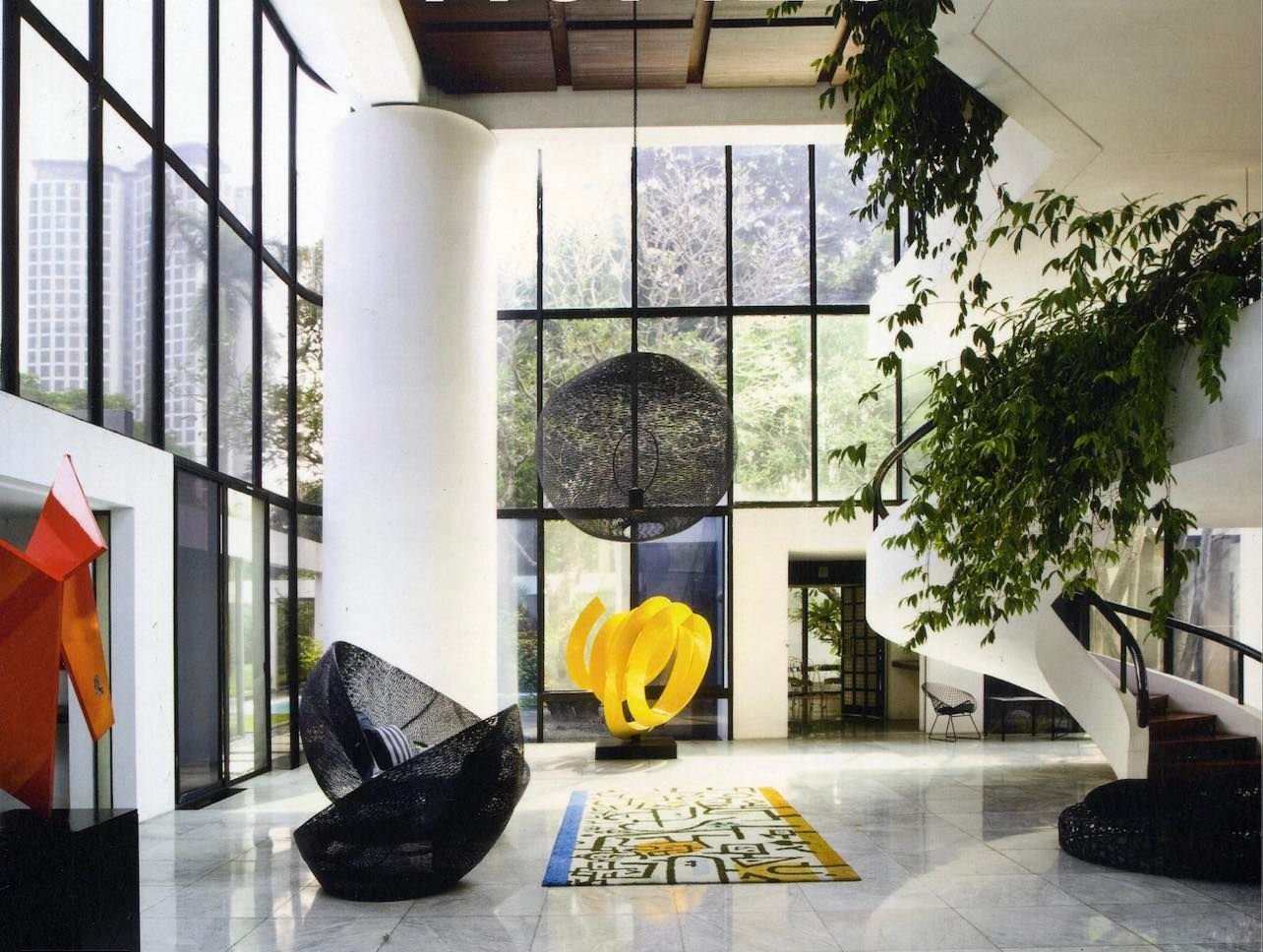 From stone adornments to wood, his preferences were always Philippine-sourced. In the space planning of either a house, an institutional building or an office, he remains staunchly Filipino, where rooms flow into functions that our culture and behavioral patterns demand.

He is always generous in opening up the living and dining areas, cognizant of the elements of tropical ventilation and the unrestrained flow of the indoors with the outdoors. In many commissions, he worked with the stalwarts of landscape design as well as the arts to generate innovative work.

One has to be honest with the expression of building materials and not to fake them, whether these are stones or timber.

The late Arturo Luz was a good friend and collaborator. Both he and Luz shared a similar contemporary taste for linearity and boldness of colors. Just like Arturo Luz, Lor Calma’s design timelessness is appreciated through generations. In all of his works, Lor is unique, unfettered and unafraid. In projects where he was given carte-blanche, clients would be happily surprised by his vision and design.

He involved himself in interiors and excelled as well, for he touched not only the interior architecture aspects but dove deeply into the finer detailing of furniture and accents that would be hallmarks of his signature. From dining tables to chairs, from built-in banquet seats in a breakfast nook to a garden outdoor settee, he passionately graced each piece into a careful blend with his uncluttered lines.

Lor Calma has always said that a designer has to know when to stop ‘designing.’ His attitude of restraint reflects this dictum.

The beauty of his work is evident in his space planning, the use of land and sites in line with contours, natural topography, landscape and water features.

Most of his projects showcased bespoke furniture, from adored couches to the tables that are now revered for their mid-century appeal. His decades of practice have instructed and influenced other notable designers who were under his wing. His furniture pieces are now regarded as family heirlooms, a joy that still brings a smile to his face.

Lor’s philosophy of designing something comfortable yet different started from his very first professional experience, when he worked as a furniture designer for the then very popular Aguinaldo’s Department Store.

His cutting and folding of not just upholstery but also of wood and acrylic yielded delicate forms that were art pieces in themselves. He would always say that “one has to be honest with the expression of building materials” and not to fake them, whether these are stones or timber.

Outstanding geometric concepts are always found in his projects. Each one, he said, is meant to “capture the transparency of space” and permit the “penetration of the natural into the artificial.”

Although recognized as an architect for residential projects, Calma did a number of public and private projects. He designed the interiors and furnishings of the Manila International Airport (now NAIA) in 1962. He also did design commissions for the Asian Development Bank and the De La Salle-College of St. Benilde, School of Design & Arts Building.

Architect Lor received the Most Outstanding Kapampangan Award in Arts and Architecture in 2010 and the Lifetime Award for Interior Design and Architecture in 1997. He garnered the Hall of Fame Award of the Philippine Institute of Interior Design (PIID) in 2006 and 1992, with the same institution recognizing him as a Founding Member in 1985. In 1993 he was given the Gintong Ama Award for Art and Culture—among so many other recognitions and awards.

Lor continues to pass on his design dictum with his oft-repeated phrases and famous quotes often told to young architects and contractors of a generation. He always said that a designer has to know when to stop “designing.” His attitude of restraint reflects this dictum.

He espouses that “a good architect must have fine taste” and values exposure and travel as proper additions to academic and professional training.

As we soldier on in defining our modern Filipino architecture in the 21st century, we take a step back and re-learn the lessons of contemporary delineation from a true mentor and guide in Lor Calma.

Cathy is an architect actively engaged in the practice, espousing modern planning and design with sustainable principles. She is also a writer and a frequent speaker in conferences for the architecture and building industry both locally and abroad.