Now, let’s get this straight: Many of us journalists are not really cooks. We do have a nose for news, but we may be inaccurate in distinguishing between the smell of paprika from peppercorn. We can cook up a feature story and spice it up even if the subject is bland. But to cook a respectable paella? I’d rather order from Rambla.

Journalists do have a wide palate range, depending on the areas they cover. Fishball sticks at Plaza Miranda or EDSA when journalism was war. Galettes and crepes when stopping by a cafe during a coverage in Paris.

But I know of two editors who enjoy tackling deadlines in front of their computers and, in this digital age, still relish the smell of fresh newsprint; and enjoy as well the delicious scent wafting from their productive ovens.

Meet excellent cooks Amy Pamintuan, Philippine STAR editor in chief; and Joanne Rae Ramirez, editor in chief of PeopleAsia and STAR Newsmakers editor. You read their columns in STAR, but don’t expect them to share their recipes there as yet. Maybe when they morph, in their next lives, to become tomorrow’s Nigella Lawson or Julia Child.

Amy Pamintuan: Cook for the Gods

When I think of Ana Marie “Amy” Pamintuan, I remember her malunggay pandesal, which was once our daily bread in the newsroom. I recall how her Sans Rival and Food For the Gods were, and still are, my Lifestyle staff’s much-awaited treats during the holiday season.

But now, things are different. Amy is now a multi-talent in her kitchen. She can do Chinese, Japanese, Korean, Italian, Spanish and, of course, Filipino. She can even make wedding cakes.

“Is there anything you cannot cook?” I ask her.

Amy gives a cute smile, looking as porcelain-lovely as a Korean actress in my favorite K-dramas. It is a rare smile, for she always looks serious in the tension-filled newsroom.

How did my UP Journalism co-alumna traverse the path from protest rallies to the newsroom to the kitchen?

“I became interested in cooking only when I was already a journalist covering Cory Aquino’s presidency,” Amy recalls.

“I saw newspaper ads of Sylvia Reynoso-Gala’s cooking school. After attending the hands-on course on basic baking, I enjoyed the experience and began taking all the cooking and baking courses. She’s still my favorite teacher, along with her son Ernest, who has taken over the culinary school. I still prepare Sylvia’s paella, callos, baked spaghetti, lengua, and sometimes cochinillo for Christmas lunch.”

There are many comic moments in cooking classes and they add to the de-stressing: ‘When baking bread, it’s fun to pound the dough on the table. If you’re mad at someone, it’s a good way to decompress.’

“Bread making fascinated me, so I set up with my brother a modest, home-based panaderia called Pugon Master, with a Chinese-style, wood-fired brick oven. My specialty is Sans Rival. I also sell the Egg Pie that I remember from my youth (no scrimping on eggs and milk). And I reconstructed from memory the Chiffon Cake with butter icing that our family loved in my youth, made by Jo-Nis.”

Amy developed Malunggay Bread inspired by Heny Sison as a healthy option to Pinoy pandesal. “But these days, people want the Ube Cheese Pandesal, which I find too sweet.”

Her Fruit Cake is aged with Spanish wine. “This is fruitcake you won’t recycle,” she says, and we believe her.

She also took a “grueling” course in the Wilton style of cake decorating with Avelina Carbungco Florendo. So Amy can make multi-tiered fondant wedding cakes adorned with edible flowers. She also studied how to make native desserts, but Amy decided it was too much work. “Making Biko or Ube Halaya with all the constant stirring in the pan will make you sweat and lose weight.” In the same school, she also studied commercial siopao making.

Amy says there are many comic moments in cooking classes and they add to the de-stressing. “When baking bread, it’s fun to pound the dough on the table. If you’re mad at someone, it’s a good way to decompress.”

In one cooking school she attended, the Chinese teacher couldn’t speak English; his wife had to translate. “I studied how to make Peking Duck and Oyster Cake, among others. He taught us how to make the duck skin crispy by pumping air in between the skin and breast. You can use a bicycle pump for this. Our teacher used his mouth, and he blew mightily and then had a coughing fit. When it was roasted, my classmates and I decided it would be impolite to reject it. It was terrific!”

Amy’s first cooking teacher was actually her mother, Otilia Tiuseco Pamintuan. “My mom says she got it from her mother, whose roots are in China’s Fujian province. My ‘Lolang Taba’ (my father’s mom was ‘Lolang Payat;’ she was no cook) even ground her own chocolate. I learned how to make delectable chicken and fruit salads from my mom.”

Amy has a roomful of cookbooks. She can even make her own candies, truffles, marshmallows and ice cream. These days she’s making Christmas ham — a cross between Chinese and Western styles.

She watches food shows during her workout on the elliptical — that explains why she still has a 28-inch waistline.

Why does Amy bake and cook? “I find pleasure in exploring and creating something that is pleasing to the senses, and seeing people enjoy what I have worked to prepare. Eating is not just nourishment; it is a celebration of life. I like contributing to people’s celebrations.”

Joanne Rae Ramirez and I call each other “Sister.” Why? There was a time when then Budget Secretary Bert Romulo would tell me: “I saw you yesterday at Malacañang!” That was when Joanne was working as executive editor in the Presidential Press Staff of Cory Aquino.

People say we look alike and I must say she is pretty (there you go, flattering myself). But the similarity has ceased, with me now carrying life’s stress lines (a.k.a. wrinkles). And while Joanne has maintained her hourglass figure, I have strayed too long in the kitchen for my husband’s fab cooking.

Joanne bakes what is known as JLOaves, as hot and sexy (read: delicious) as the reference, a term coined by officemate Gian Carla Guerrero. She also creates beautiful tablescapes, which made husband Ed call her “La Mesa Dame,” for she takes him and son Chino table-hopping from the Middle East to the Mediterranean, as she uses plates and accessories collected from travels past.

What made Joanne go into baking? “The last time I baked anything prior to the lockdown was over two decades ago. I have a one-armed rolling pin as a relic of those days. Ed bought me a new one, and a mixer, too, when he saw that my baking wasn’t just a flash in the (baking) pan.”

I once was terrified about bread rising and falling, like an empire of flour and yeast. A perfect loaf of bread is like the Eiffel Tower, while the one that isn’t is like Troy.

The lockdown gave her a chance to “play house” again, something that her fulfilling but exacting journ career had not previously allowed her. “The lockdown has a silver lining. The gift of quality and quantity as far as time was concerned. For the first time, I was home 24/7. So I dusted off old recipe books, surfed the Internet for new finds, and picked up the ladle and rolling pin again.”

Finding refuge in cooking during this period of confinement

It was her mother, Sonia Reyes Mayor, who inspired her to bake. Joanne remembers the most scrumptious Apple Pie and Pineapple Upside-down Cake when she and her siblings were growing up.

“She was inspired by her late mother-in-law, my grandma Mary Loudon Mayor, who was a kitchen wiz with her Lemon Meringue Pie and Refrigerator Cake, the recipes of which have been passed down to us. In Assumption high school, we also had baking classes under the unforgettable Mrs. Del Carrion, who honed what my mother taught me and my sisters, one of whom, Valerie Sotto, is a successful professional baker,” she shared.

Clearly, cooking is a talent nurtured within the family. 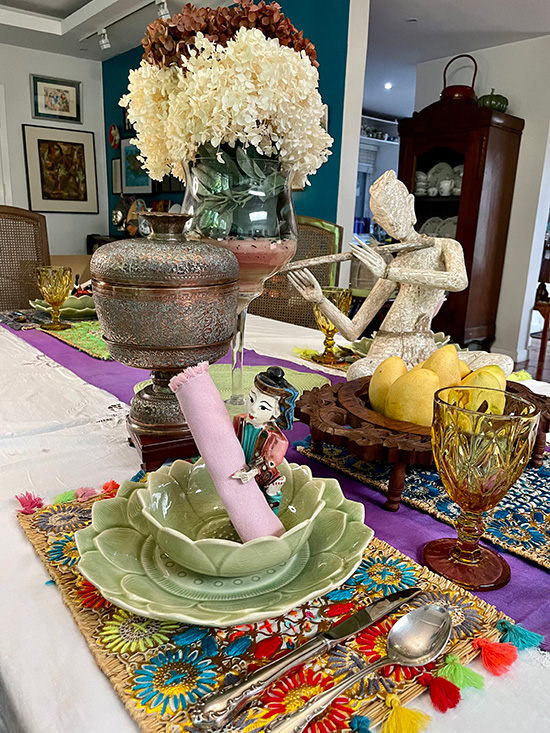 “Even in high school, I used to bake Buko Pie and Boston Cream Pie. Chino remembers that when he was growing up, I would bake Prune Cake,” Joanne recalls. “But what I learned all on my own was how to bake bread. I once was terrified about bread rising and falling, like an empire of flour and yeast. A perfect loaf of bread is like the Eiffel Tower, while the one that isn’t is like Troy.”

Elevate your kitchen experience with these sleek, modern appliances

The loving wife that is Joanne made her take up baking bread during the lockdown “because my husband prefers it to rice, always has. So instead of regular trips to the bakery for freshly baked bread, I baked bread myself. It started with a Butter Loaf, then French Bread. Neighbors and friends started ordering, and soon enough, travel industry stalwart Bob Zozobrado suggested I add Cinnamon Raisin Bread to my kitchen repertoire and voila — it’s now a JLOaves bestseller!”

What pleasure does an editor derive from being a baker as well? “The pleasure of creating something from scratch. The pleasure of reinventing a part of me. The pleasure of a compliment. The pleasure of eyes lighting up at the table even before the first bite,” explains Joanne. “I like mentoring my cook, so I have delegated most of my cooking to her. This, too, makes me happy.”

Will Joanne aspire to open a bakeshop like her sister? “At the moment, my baking is a hobby that pays for itself; an ingredient to my happiness, as I have realized that bread rising in my oven is uplifting, literally and figuratively. In baking, you find gratification in a couple of hours — a golden brown, buttered monument before your eyes. It’s a science; it’s art. It’s love.”

I can imagine Joanne clicking her high heels as she mixes the scent of her perfume with the aroma of her freshly baked bread, while Ed and Chino lovingly wait at her picturesque tablescape.

Explore Intramuros in style in this Filipiñana costume and tranvia tour

Attention, digital nomads: Here's how you can get a 10-year visa to work in Thailand