Biking for leisure, motorcycle tourism and car camping are just a few of the new trends on the rise as people seek alternative ways of traveling for leisure and adventure.

With Father’s Day approaching, PhilSTAR L!fe asked a few cool Pinoy dads with a passion for driving about their top road trip recommendations, whether traveling alone or with their kids. 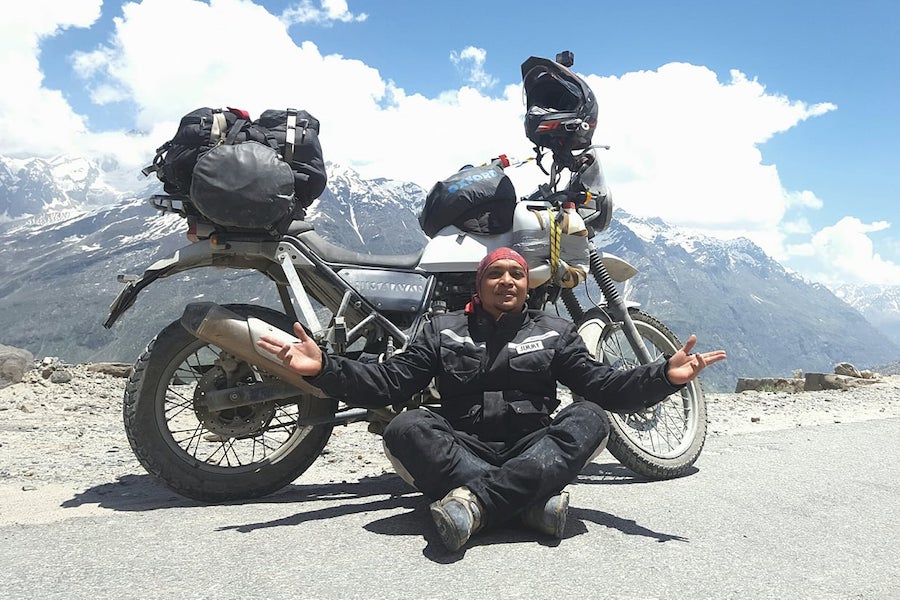 From riding all over the Himalayas, he continues to rediscover the beauty of the Philippines by big bike. Barinaga cites “the long winding roads of Mindanao,” particularly Lake Sebu, as one his top road trip destinations for solo rides in the country.

“The route from Zamboanga Peninsula to the melting pot that is South Cotabato where Lake Sebu as the destination is one of the best for me. It is known for its lush greenery, abundant biodiversity, rich and the diverse culture of the T'boli tribe, Lake Sebu makes for an enchanting ride experience,” Barinaga told PhilSTAR L!fe.

“This place also features the amazing Seven Falls. It’s a series of majestic falls that were uniquely cascaded together to which you can trek casually after a long ride, and all seven of them form a breathtaking sight to which takes away the tiredness. I can ride Mindanao 'The Land Fulfilled' anytime,” he added.

But aside from his epic multi-day rides around the country, Barinaga also shares his passion for motorcycles with his kids, especially for shorter urban rides and weekend adventures. 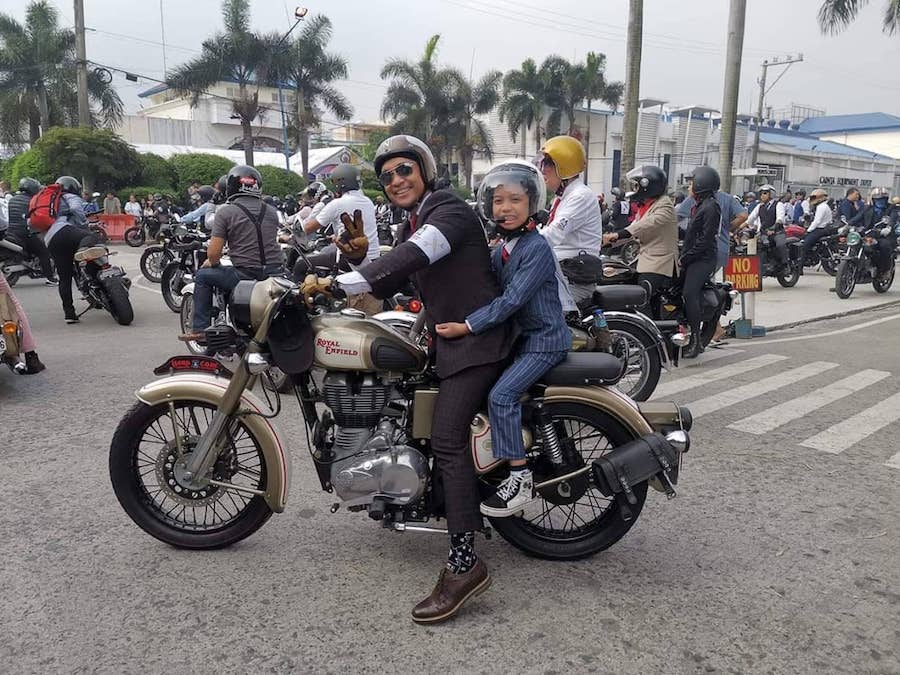 “As a father who has brought up our children with familiarity of revving motorcycle engines and numerous back rides, my kids have shared the roads with me,” said Barinaga.

Both his son Dylan and daughter Layla have been trained in off-road riding since they were as young as 7 and 6 years old respectively.

“My son Dylan (now 14 years) old still maintains his own Honda CRF-50. But, it’s my daughter Layla who has claimed as her territory the pillion of my Royal Enfield motorcycles. She has been in all Distinguished Gentleman's Rides since 2014 where we started riding together while she sat on my Classic 500's fuel tank (she was a tiny 5-year old then),” he said.

With travel restrictions eased, he looks forward to taking his kids on long rides to Cape Bojeador Lighthouse, a Spanish colonial structure in Ilocos Norte.

“I'm planning to take them pillion here soon as I've been telling them of the history of the place and what could have transpired there during those times,” he shared.

Like many other dads, Gus Palmares Banusing Jr., a car enthusiast based in based in Iloilo City, turned to motorcycle riding (specifically offroad trail riding) and mountain biking amid the pandemic.

While restrictions and checkpoints were still very strict in Metro Manila especially during the early days of the lockdowns, Balmares managed to explore off-road destinations near his home city thoroughly.

“For solo rides, usually on a trail motorcycle, I like to discover the area backroads of Leon and Alimodian onwards,” he said referring to mountainous areas in Panay Island roughly 35 kilometers away from the city.

“You pass through different mountains as well as several river crossing adventures. Mostly, these roads are still gravel and sand,” he added. 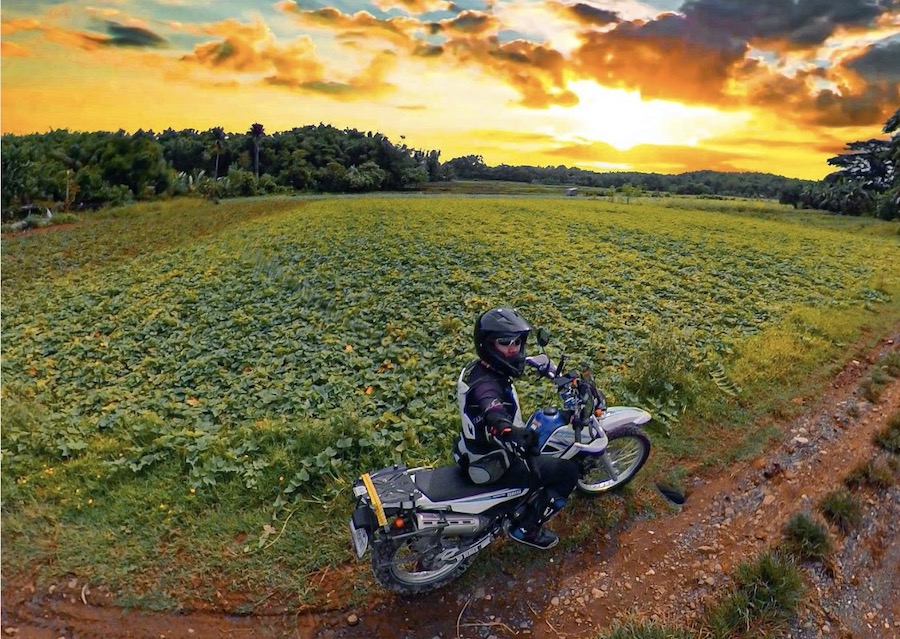 For road trips with the family by car, he usually enjoys driving through Passi onwards Roxas City to the jump-off to Boracay (roughly 260 km away) from Iloilo City.

Depending on the distance and destination, this cool dad also shares many of his two-wheeled adventures with his teenage daughter.

“If it’s around 30 to 40 kms, I bring my daughter off-roading using mountain bikes. If it's around 60k up to 120k, then I do it myself using road bikes. But it is indeed also another thrill to use a dirtbike on off the beaten paths. It goes hand in hand. I discover paths using a dirt motorcycle, then repeat it using a mountain bike (with my daughter)” he shared.

He does acknowledge that riding bikes is not for everyone, so he makes sure his daughter doesn’t feel pressured to go with him on rides.

For those stuck in congested urban centers like Metro Manila, his provincial lifestyle and the greener pastures it offers is enviable.

“We have our own share of traffic here. But it’s nothing compared to Manila. I just go out of our gate, and 20 mins pedalling is a scenic provincial farmland view. To the right is a scenic costal beach ride. You can do any of these options from 6am to 8am then hit the office by 9:30am,” he shared.

#LetsTalkAboutCycling: 6 things every new cyclist must know before hopping on a bike

Bikepacker and motorcycle rider Byron Villegas shares a lot of great tips on both traveling solo and with biking buddies all over the Philippines on his website Bikepacking Philippines.

"Near Metro Manila, Caliraya Lake, Lobo Batangas, and Real, Infanta and Nakar towns in Quezon are good options for motorbike camping, van camping or car camping. You can do wild camping in these mentioned areas if you are solo, or with a small group of friends," recommends Villegas.

For travels with the whole family in tow, Villegas recommends van or car camping and glamping to scenic destinations relatively near Manila, choosing small resorts with entrance fees for added security. 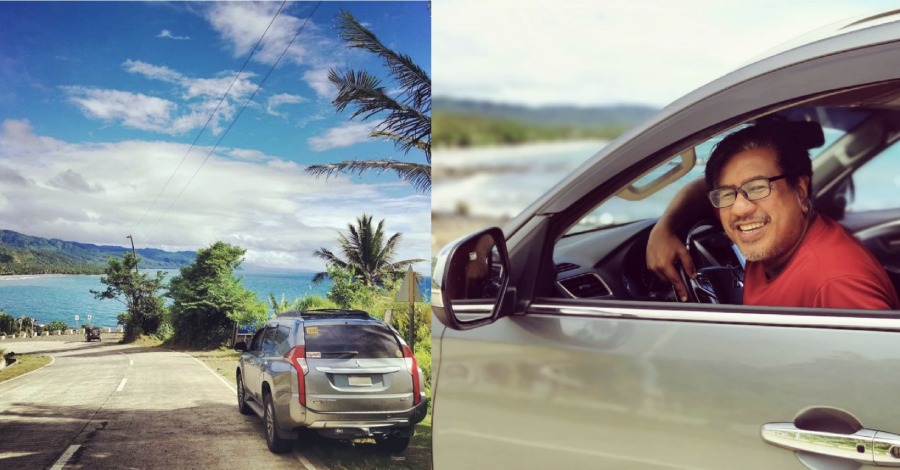 Van camping and car camping has risen in popularity as a vacation option during the COVID-19 pandemic around the world, including in the Philippines, as families try to avoid crowded places for their weekend getaways.

"For van camping with kids, it's important to choose places where you can feel secure, and with clean restrooms. Specially if you have small children, you can actually do car/van camping, or pitch your tents in the yard of an Airbnb rental home," he shared.

5 refreshing campsites that are worth the drive from Manila

"For example, our AirBnB, Casita Real is a beach front property. There's a tiny house with one bedroom, and a kitchen. It's a well fenced property, so you'll feel secure. It's also a beachfront property, and there's an area where you can pitch a tent, if the father and son wants to experience sleeping overnight in a tent," he shared.

Villegas said he shares his passion for driving and riding with his kids by discussing his favorite hobbies, like cars, vans, 4x4s and motorbikes, with them. "Sometimes, we even watch YouTube videos of car camping and motorbike camping."

However, he said that his kids prefer road trips by car, with lots of stopvers at new roadside cafes, rather than joining him on two-wheeled adventures, which he enjoys solo or with his wife.

With rising fuel costs these days, road trips also have to be more planned out and maximized to visiit as many destinations as possible.

"Since gas is expensive, we plan our camping trips well: the route, departure time to avoid traffic, and schedule too, so that we can visit multiple places in one trip," he shared.