It seems like only yesterday when Derek Ramsay and Ellen Adarna surprised fans with their whirlwind romance and engagement. Eleven months later, the two are now set to become man and wife.

Can you believe it all happened in less than a year? Here's a brief history of Derek Ramsay and Ellen Adarna's journey down the aisle.

In an interview with MEGA, Derek revealed that it was the first time the two met up over a few drinks, despite being neighbors for years.

“We sat outside by the pool and we talked and had a few drinks and the chef was kind of late so we had more than a few drinks. By the time dinner was served, medyo nakainom na kami and that’s where the magic started.”

Derek was fresh from his breakup with actress Andrea Torres and he had revealed that he was not looking for love at the time. Ellen was also not seeing anyone.

They continued to deny dating rumors throughout the month, going as far as hitting back against commentators on Instagram.

Despite repeated denials, Ellen and Derek were spotted out on a vacation in Batangas with Ellen’s child Elias, her son with John Lloyd Cruz.

During this month, Derek made his debut on Ellen’s Instagram with a grid photoshoot of the two while out of town. They also spent Valentines’ Day together alongside Ellen’s family.

On February 26, they finally acknowledged their relationship, revealing that they had been dating for a month.

In a month, the two revealed that they both took their time getting to know each other.

"Both of us have no game in this relationship,” Ellen revealed in the same MEGA interview. “Like pareho kaming naging tameme na torpe, hindi namin alam how to act, like high school. We didn’t even kiss during ligawan.”

In late March, the two shocked fans once again after announcing their engagement shortly after their first month of being together.

In an intimate gathering with friends and family, Derek popped the question to Ellen and received her giddy "yes".

Ellen marked the moment with the now iconic photo of her ring-studded hand grabbing Derek's face.

Derek went on to deny rumors that the wedding ring he gave Ellen was passed down from his ex-girlfriends or an ex-deal, saying “sa mga bashers na sinabing pinagpasahan ko ‘to, e di dapat nasa news ako na engaged na before, di ba?”

“First time ko narinig na ex-deal. That’s funny pero yun nga, they said that this ring has been passed on to all my exes and that’s just so low.”

He also shared that his mother offered him a 7.8 diamond ring for Ellen, but he decided to buy a custom-made one.

“I want to purchase this one,” he said of the ring he gave to Ellen. “I purchased this diamond.”

Since then, the couple have been preparing their wedding.

Six months after their engagement, Ellen and Derek finally went on a Siargao vacation with both of their families.

In a series of Instagram stories of the trip, Derek shared photos of his mom and Ellen with the caption "#Mamanhikan," a term used when a couple formally introduces their families before getting married. 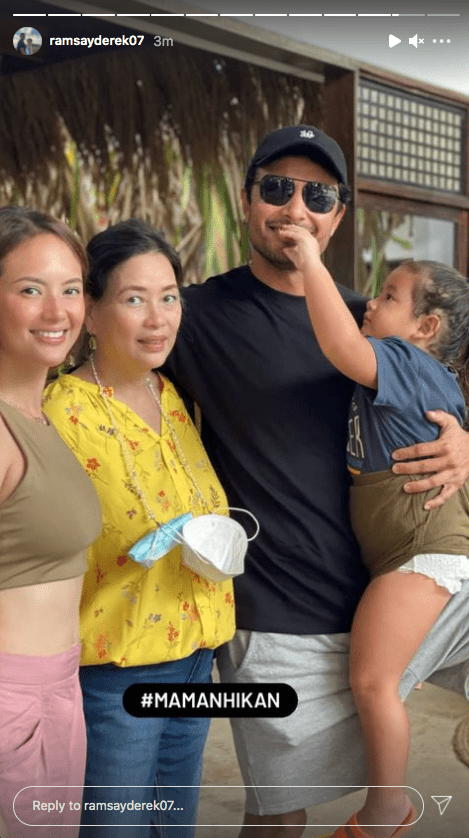 After keeping mum about wedding details on social media, the two finally shared their steamy prenup photos in October. The actress also revealed that it was their very first photo shoot, as they never had any projects together as celebrities.

"For the concept of the shoot, we wanted a '90s romantic mood that represented the couple's love," Ellen's manager Danel Calixto said.

"It is raw, spontaneous and fun. The shoot location is very special for the couple because this is where they went out of town with their friends for the first time. It's an ode to the ‘first date.' It is where it all started."

LOOK: Derek Ramsey and Ellen Adarna share photos of their Save The Date invites