We look at Googlemaps to find a place, an online encyclopedia to find more information. It was only a matter of time that a website would combine the two to give us a food map—of the world.

TasteAtlas is an “encyclopedia of flavors, a world atlas of traditional dishes, local ingredients, and authentic restaurants.”

The site has catalogued over 10,000 foods and drinks, with “dozens of thousands yet to be researched and mapped. The popular ones, as well as the forgotten tastes and aromas of every city, region, and village in the world.”

TasteAtlas is literally an online map—an interactive map—that lets you search the world for what to eat and where.

When you click on the Philippine map, it shows you 131 dishes scattered across the archipelago. Up north you have papaitan, dinengdeng, pancit cabagan, and the rice wine tapuey, which is fermented in clay jars and used as ceremonial wine in the Cordilleras. You have pinangat in Bicol, pancit in Angeles, bulalo and adobong pugita south of Manila.

In the southern provinces the map shows you where to have inasal na manok, utan, batchoy—even rosquillo and otap.

After consolidating these foods and their histories, TasteAtlas has come up with a list that’s bound to be contentious (any list is—especially to Filipinos) because it ranks Filipino food into Best, Great, OK and Worst.

Cue the indignant reactions and defense of balut and dinuguan, and the finger pointing at tocino’s preservatives. Or comments like “daing is not a dish” and “pinipig is love” (to be honest, those are my comments). We all know that every regional dish in the Philippines has the potential to represent the best of the country’s cuisine—just as every barrio lass can be Miss Universe. 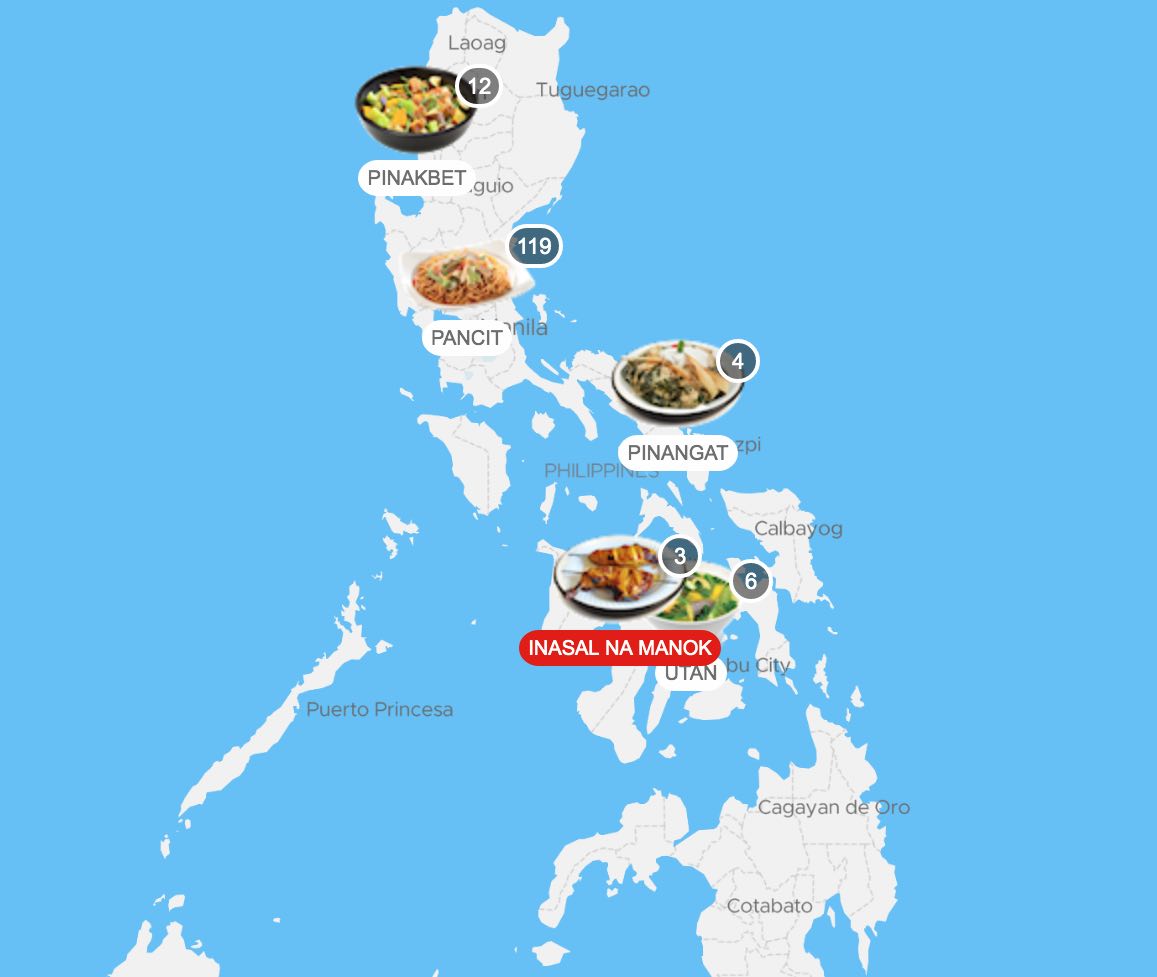 Seriously, it’s a very useful website even for dishes you already know. When you type in “lumpiang Shanghai” it shows you where to get the “best lumpiang Shanghai in the world”—Aristocrat, “recommended by Everything MNL and 34 other food critics.” It also tells you where it's served nearby.

Obviously TasteAtlas did not do the ranking randomly. It does not actually say how they chose the food experts for the restaurant recommendations—but they did because some food websites are named while other restos are simply “recommended by x number of food experts.”

Ever been to a city where you didn’t know what to eat or drink? The food atlas is useful when visiting places whose cuisines you know nothing about. You don’t have to go to several websites to get more information on local food.

For instance, you just got on a flight and ended up in the Balkans. And decided on Northern Macedonia’s capital city Skopje on a lark. No previous research, not knowledge of the place except they like to drink rakija (the popular and slightly infamous tipple in the Balkans—it can knock you out for two days!).

Just click Skopje on the map or type it on the search bar and you find three dishes you musn’t miss: kukurec, a lamb specialty “made with knitted lamb intestines, strips of lamb tripe, and sometimes lamb sweetbreads” (dinuguan has nothing on this dish!); ajvar, a peppers-and-eggplant relish (which I had on the recommendation of locals in 2017), a sort of condiment for meats but can also be eaten with bread; and sarma, which is minced meat wrapped in leafy vegetables, originally form Turkey’s Ottoman Empire. 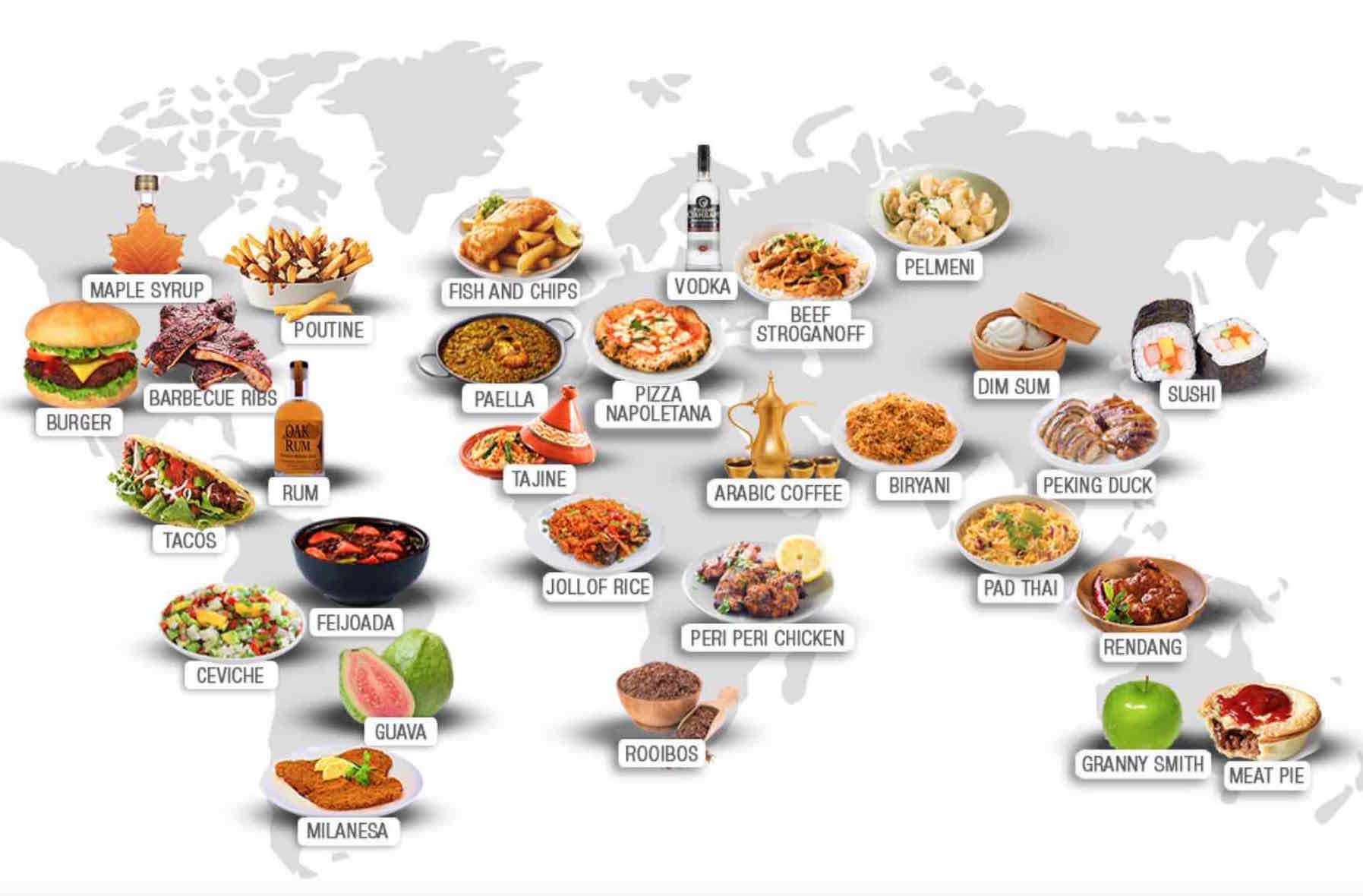 You get such a wealth of information on every dish featured in every country—and nice photos too. Ever wonder what people Krygyztan eat? Well, now you can find out—what, where, how and even why.

Go ahead and think of a country or a city and find out what locals eat. Now you have your own roadmap for travel’s greatest pleasure—the food.

Planning an intimate holiday gathering? These al fresco spots are worth checking out