It’s been a long time coming for anime fans across the globe — Studio Ghibli, probably the most beloved Japanese animation studio worldwide, is now on Netflix.

We love Ghibli films for their simplicity, their realism, their positivity in the face of grim realities. In a world where people usually stereotype anime as “over-the-top,” Ghibli grounds their stories, leaving a lesson to be learned every time the credits roll.

Ultimately, however, the appeal of Studio Ghibli for us and (we hope) many others like us has always been its catalogue’s dynamism.

With Ghibli, the stakes are often always big and small, about the things that make us human and then some. More than any theme or desire for the fantastical, it’s these films’ innate love for the human condition that keeps us coming back for more.

However, with the sheer amount of films they have produced, it may be hard for a beginner to know where to start, or for longtime fans to decide what to watch in the moment. Here we break down some of Ghibli’s filmography, with some recommendations according to genre and mood.

Reflections on growing up 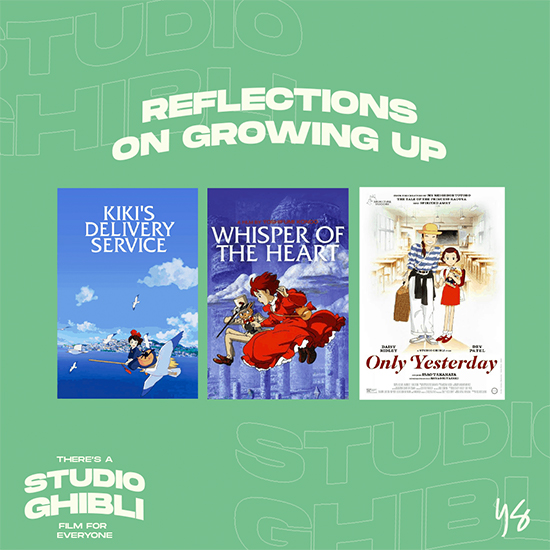 When you watch Kiki’s Delivery Service, you get thrown into a world of uncertainty. Kiki is a 13-year old witch (yes, she flies on a broomstick and owns a talking cat) who moves out of her small town as part of her training, and moves into a big metropolitan area where she knows absolutely nobody. This is a story of the adolescent struggle with independence, and how it’s important to always believe in yourself, even when it seems like nothing’s working. — Anton Tablante

Whisper of the Heart

Whisper of the Heart is known for being one of the sources of the famous “lo-fi hip hop beats to relax to” girls. More than just a meme, this film explores love, in its simplest sense — love for a craft, and love for a person at the same time. Slowly, it unfurls the relationship between Shizuku, a writer, and her crush, Seiji, an aspiring violin maker, and showcases its impact on Shizuku’s values and dreams. A true slow-burn love story. — Anton

Only Yesterday is both Studio Ghibli’s most straightforward ode to youth, and arguably its most daring visual project. In 1982, a young Tokyo office worker named Taeko Okajima takes what seems to be a mini-vacation from work in order to visit family in the country. That’s it, and yet not quite.

For me, Only Yesterday’s true value lies in its lovingly detailed renditions of everyday phenomena — the twirl and snap of an ‘80s telephone chord, the crinkle of a straw sun hat, a young girl’s wondrous hold on a made-to-be foreign slice of pineapple. They imbue each film frame — and by extension, Taeko’s own cinematic character — with an unaffected innocence and wistfulness that most live-action films would be hard-pressed to replicate. — Jedd Ong 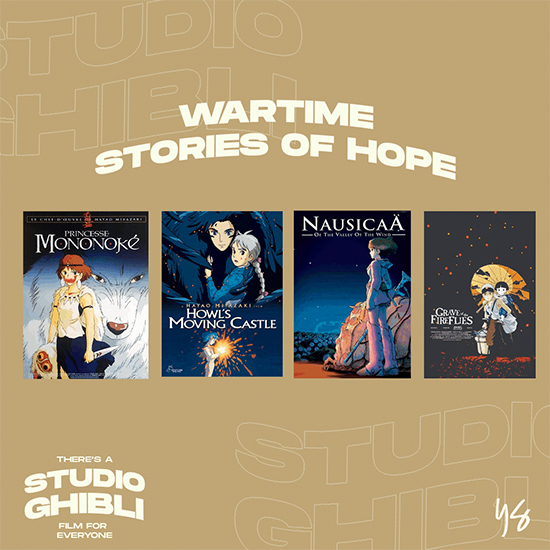 Raised by wolves, handy with spears and knives, and openly cynical about the goodness of humankind, “Wolf Girl” San is the kickass breakout character of Princess Mononoke, and also the person to whom the title refers. With her battle skills and affinity for nature, she ensures that Ashitaka, the film’s protagonist, successfully navigates the corrupt battlegrounds containing the cures he seeks. That, and imbuing him with the courage to confront the primary reason for his  — by extension, his village’s — curse: a long and checkered history of politically-sanctioned environmental abuse. — Jedd

Howl’s Moving Castle is one of the few films in the studio’s repertoire that directly traces its conception to a singular political event: the 2003 Iraq War. When a girl is cursed by a witch to appear as though she has aged decades, she has to rely on a young wizard and his friends who live in (you guessed it) a moving castle.

Its primary message of pacifism, and its satirization of the global industrial military complex through the wealthy, sadistic, yet bumbling Madame Soliman, is sure to leave viewers as perplexed as they are mesmerized. The actual moving castles are as breathtaking as they are deliberately on the nose. — Jedd

Nausicaä of the Valley of the Wind

Put quite simply, Nausicaä is a pro-nature, anti-war epic masterpiece. The film follows the journey of its titular main character in a post-apocalyptic world, as she struggles against a totalitarian empire’s goal to wipe out giant mutant insects that roam the land.

Nausicaä herself is an incredible, strong protagonist, who goes on a cross-region adventure to protect her valley and the nature that she deems sacred, even when others don’t. We have many lessons to learn from Nausicaä’s drive to protect her beloved world — there is no better time to watch this movie than now. By the way, this is an unofficial Ghibli movie; it was the movie that kickstarted the founding of the studio itself, and still, after all these years and movies, it holds its ground as Ghibli’s seminal adventure-epic. — Anton

Grave of the Fireflies

Get your tissues ready. Grave of the Fireflies is one of Ghibli’s more infamous films — for a good reason. The movie explores the city of Kobe post-World War II, and the downright depressing effects of the war on a pair of siblings, Seita and Setsuko, in particular. Haunting and dark, with a few flickers of hope here and there, the full impact of the war bares its teeth. Starvation. Bombings. Sickness. This is a captivating, painstaking reminder of why a World War should never happen again. — Anton 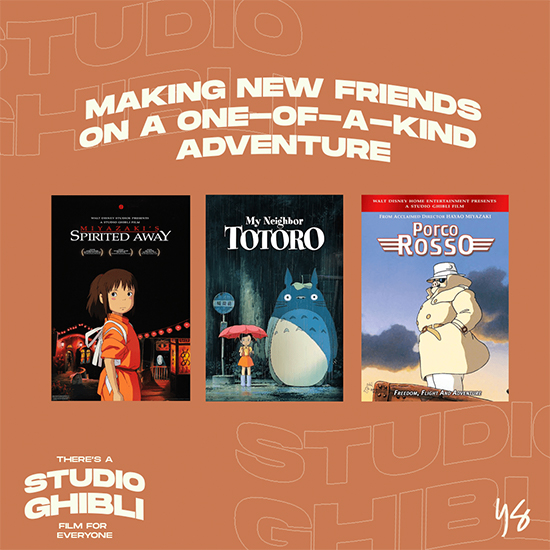 If there was one word to describe Spirited Away, it would be heartfelt. It’s the rare film, about a 10-year-old girl who finds herself in a world full of strange folk and creatures, that is able to weave in a tale of love, family, and friendship with sophisticated societal critique.

What makes Spirited Away compelling, though, is not the fact that the film in many ways doubles as an anti-consumerist takedown, but rather the fact that Chihiro’s strength and courage comes not from any perceived superhuman ability on her or the spirit world’s part. For all the film’s questions about nature and tongue-in-cheek portrayals of avarice, its centre is still all human and heart: young Chihiro, on a river train to the unknown, staring steadily ahead as her newfound friends rest quietly next to her. — Jedd

In terms of sheer awe-inspired wonder, Totoro for us has always taken the cake. There’s just this grounded yet magical quality to its world that has always transcended imagination, centered on two sisters who move into a new house and stumble upon a giant rabbit-like spirit creature.

Blink once, we’d think, and maybe we too can find ourselves on the Catbus, flying through Manila’s vaunted rush hour. Push apart a shrub perhaps, and find in the expanse Satsuki and Mei, big Totoro, and little Totoro, laughing and dancing a tree into existence. That the film might also be Miyazaki’s subversive nod to an obscure child murder case is just the icing on the cake. — Jedd

Air fights against air pirates — what could go wrong? Porco Rosso is a fantastic romp, taking us all over the seas and in-lands of Europe with spectacular sky battles all throughout, through the eyes of a ace-veteran-turned-bounty-hunter and his fiery 17-year-old flying partner, Fio. The main character of this movie also happens to be a pig. A very intimidating, anthropomorphic pig.

Porco Rosso gives us Ghibli’s version of a hard-boiled, post-World War I world, and we’re just lucky to watch it unfold. — Anton

LOOK: Catch this Beatles pop-up exhibit at Glorietta 2 until Aug. 17