Fans of Spider-Man: No Way Home are now buzzing online over wild theories, Easter eggs, and some key moments spotted in the official teaser, which dropped this week.

Here are the major details that sent seasoned Marvel Cinematic Universe (MCU) fans and new ones into a frenzy.

Yes, the teaser has officially confirmed rumors surrounding the return of legendary Spider-Man villains through glimpses and hints. First, we have Otto Octavius a.k.a. Doc Ock played by Alfred Molina, the same actor from Spider-Man 2. Arriving at the bridge opposite Spider-Man (Tom Holland), Doc Ock seems to be ready for revenge over his supposed death in the river by calmly saying, “Hello Peter.”

Next up, did you catch a glimpse of the striking electricity scene? This hints at the shocking villain Electro from Sony’s controversial The Amazing Spider-Man 2 with Andrew Garfield. While Oscar-winner Jamie Foxx is not seen in the trailer, the trailer teases a possible appreance with an electric design update from blue to yellow (or gold), which is more comically accurate according to The Direct.

But, wait, did you also see that giant figure in the electric scene? It seems to be Sandman (Thomas Haden Church) serving as a barrier to protect Spider-Man from Electro’s attacks, especially that the two made peace before Maguire’s death in the previous franchise. 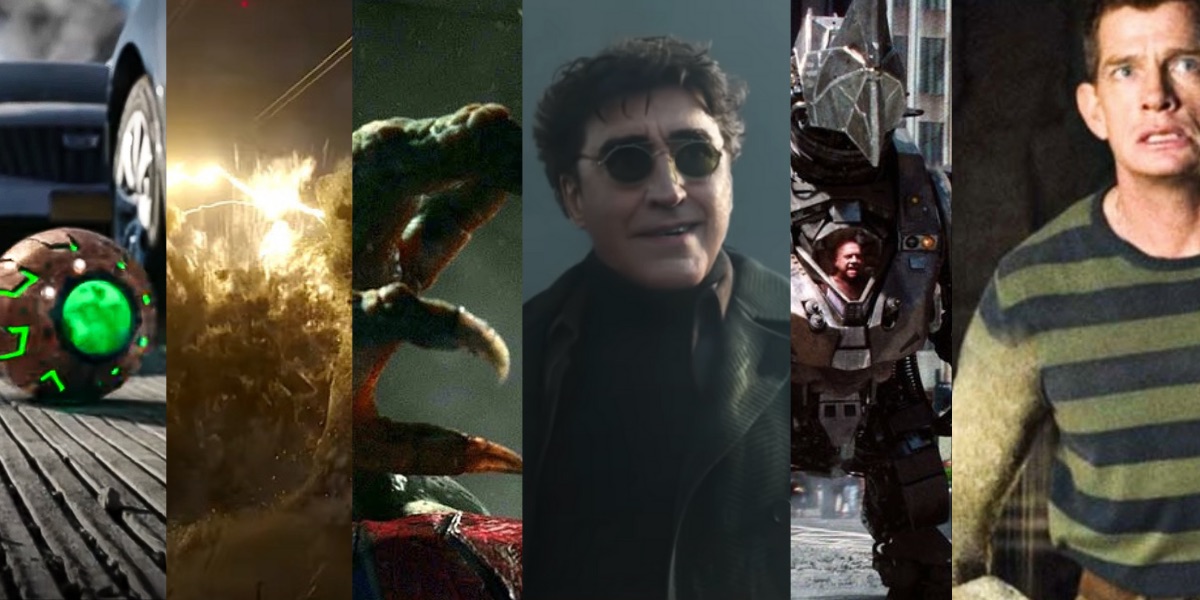 You couldn’t have missed the iconic green Pumpkin Bomb drop either! Who else owns it but the “Green Goblin” (as confirmed by the signature sinister laugh)? Although Marvel Studios has not yet officially confirmed if Willem Dafoe will play the villain, his return also signals a potential comeback for Tobey Maguire.

It was quick but did you see a reptile claw attack Peter from behind? Lizard returns from The Amazing Spider-Man, which was Garfield’s first main villain.

Even though no hints were given, the mech-suited Russian mobster Rhino returns and is among the list of villains, as per Collider.

However, it’s not impossible that two supervillains—Vulture (Michael Keaton) and Mysterio (Jake Gyllenhaal)—might still be facing Spider-Man as the first is alive while the second might have faked his death.

The end is the start 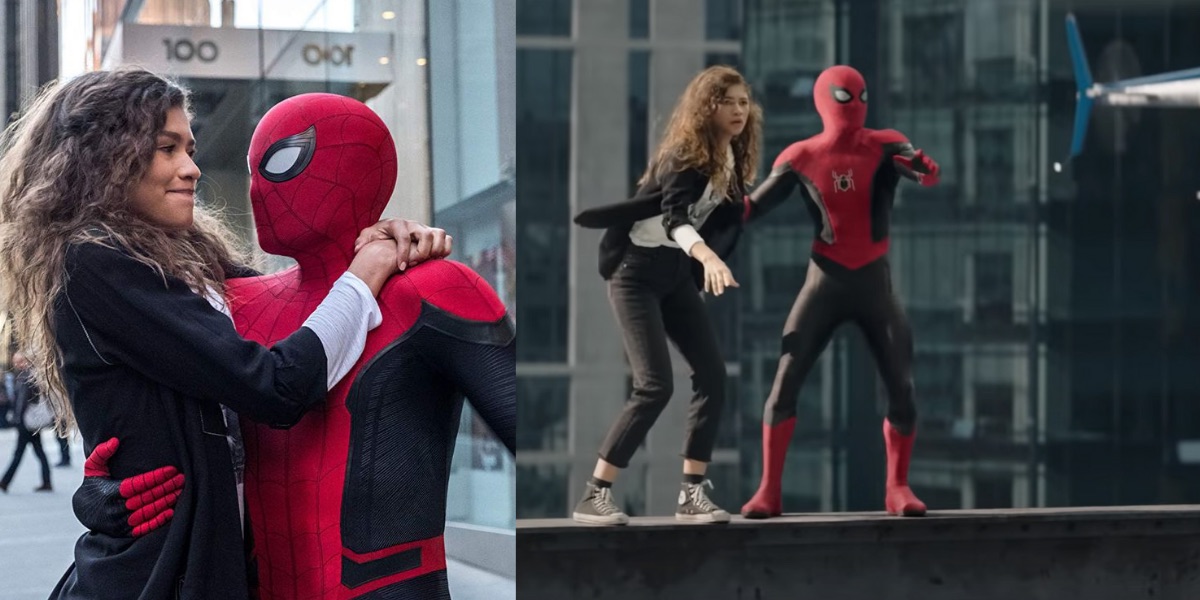 The first few moments of the trailer hints that the movie will probably start at the end of Far From Home going by MJ’s (Zendaya) outfit in the post-credit scene. Another hint is that Peter Parker was so shocked and panicked after his identity was revealed by the vindictive editor J. Jonah Jameson (JK Simmons) through a video of Mysterio in the final scene.

Pressured from the identity reveal, Peter Parker asks Doctor Strange to cast a spell that will make the world forget who he is. Although Wong (Benedict Wong) warned the wizard not to cast the spell, Strange still does (fans relate his wink to WandaVision’s iconic Agatha Harkness). This has led to speculation that Strange could be the one that opens the Multiverse and the Sacred Timeline, aside from Loki and Wanda.

Strange’s move seems out of character especially after the epic Infinity War, not to mention his “dad vibes” with that cute mug printed with “Oh for fox sake” (a phrase likely to be used when the spell has gone wrong) and Sanctum Sanctorum’s winter tundra, which fans associate with Disney’s Elsa. 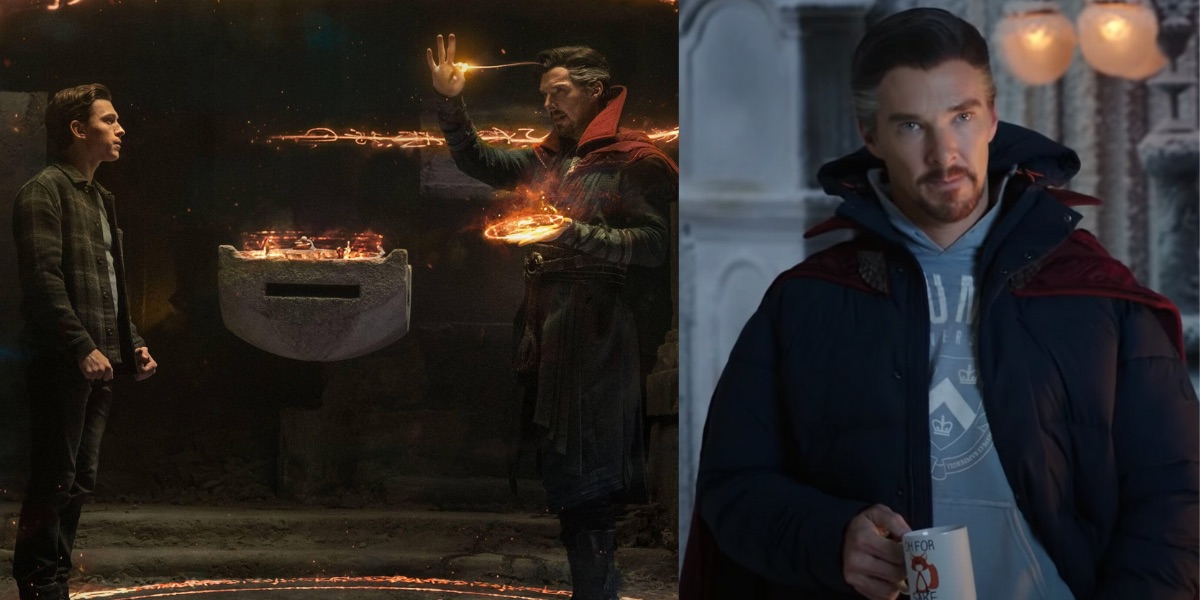 Regardless of Strange’s bizarre behavior, Peter has second thoughts as he would miss the people close to his heart: MJ, Ned and Aunt May.

Lastly, it’s puzzling how Strange wears the Eye of Agamoto, the time stone he wears in Doctor Strange (2016), which he sacrificed to Thanos in Infinity War (2018) and returned to their timelines along with other infinity stones in Endgame (2019). This means that in the present timeline, Strange should not have the time stone anymore. 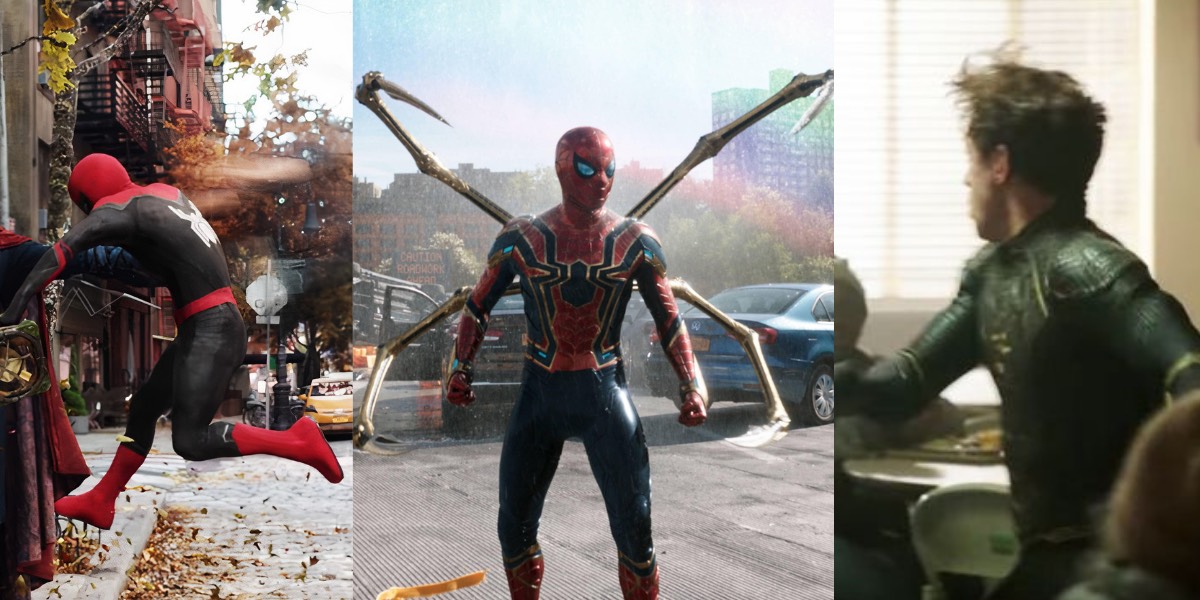 A superhero is never without a super suit. In the trailer we saw the Iron Spider suit, the Black and Red Bosco suit from Far From Home, and what seems to be a black and yellow suit resembling Maguire’s in Spider-Man 3.

Doctor Strange does the Astral Projection punch on Peter to reveal the latter’s spiritual form like what the Ancient One did to him in Doctor Strange. 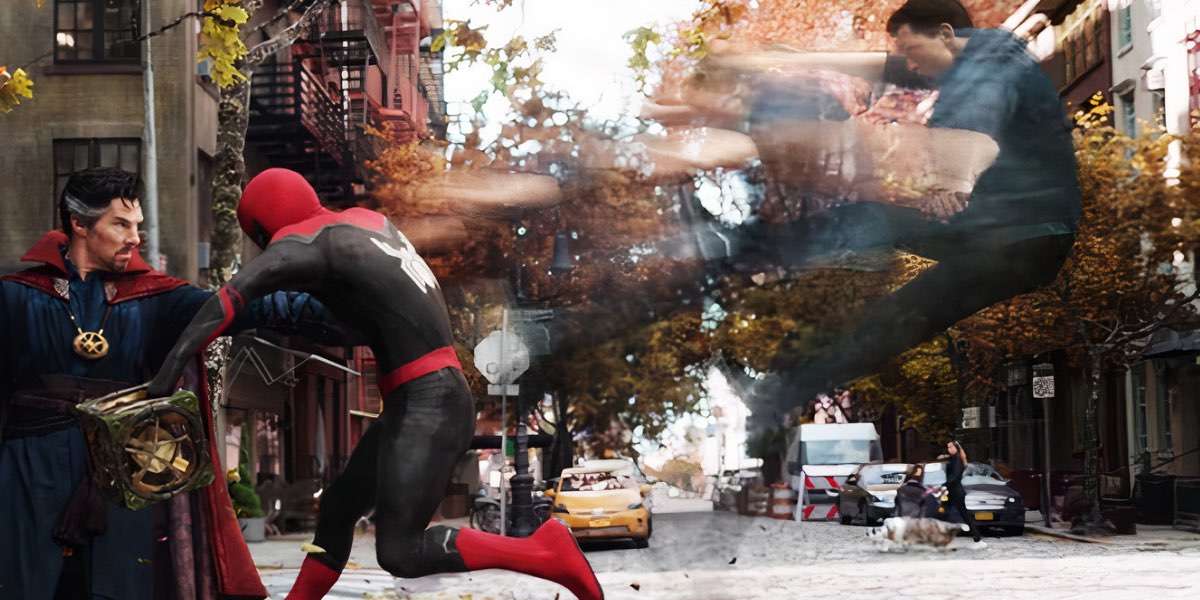 "The problem is you trying to live two separate lives. The longer you do it, the more dangerous it becomes," Strange tells Peter, which could point to the Nexus event, a concept in Loki, that signals that both may be on the wrong path.

Another interesting Easter egg is the mysterious-looking cube that Spider-Man is holding. Though no clear references were made, objects and artifacts in the MCU hold crucial roles.

Speak of the (Dare)devil in Disguise (Mephisto), Murder of Mysterio

In the trailer, the sign “Devil in disguise” is seen, depicting a picture of a devil Spidey as Peter heads to court. This scene relates to the opinion of New York City dubbing him “Public Enemy #1.” It has also stimulated fans to speculate on Mephisto, an extra-dimensional demon responsible for the evil acts in MCU, which fans thought to be in WandaVision. 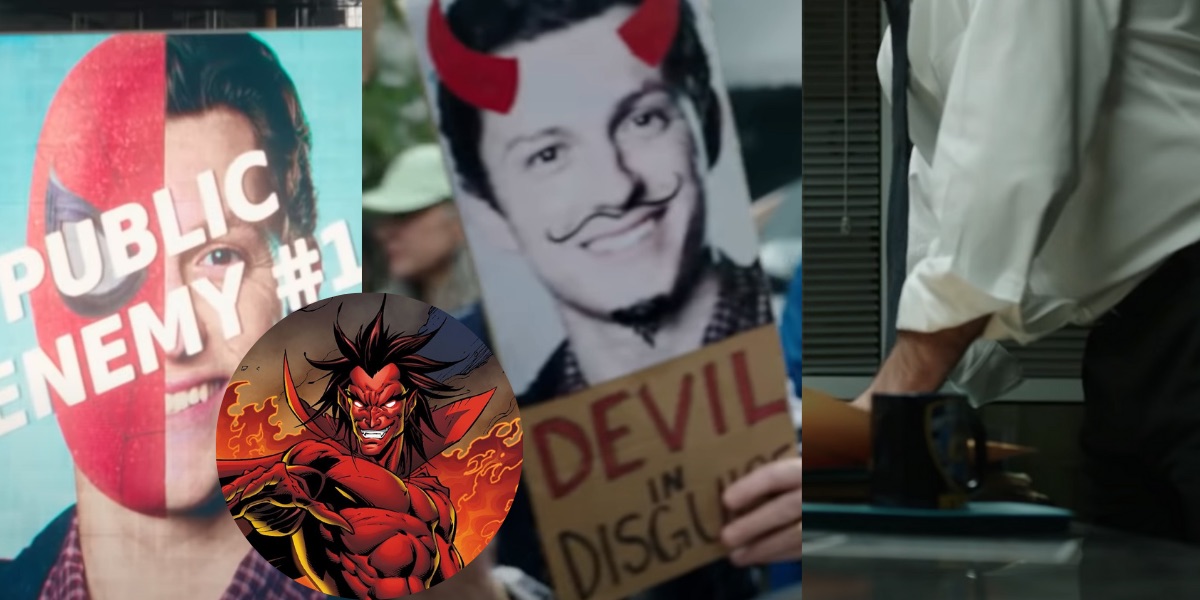 One Marvel fan tweeted a theory that the strange winter tundra in Sanctum Santorum might just be the work of Mephisto with reference to Dante’s Inferno.

However, it could also be Matt Murdock a.k.a. the DareDevil, played by Charlie Cox. Murdock might be Peter’s lawyer, and fans speculate that the scene with an arm slamming on file folders might be his. 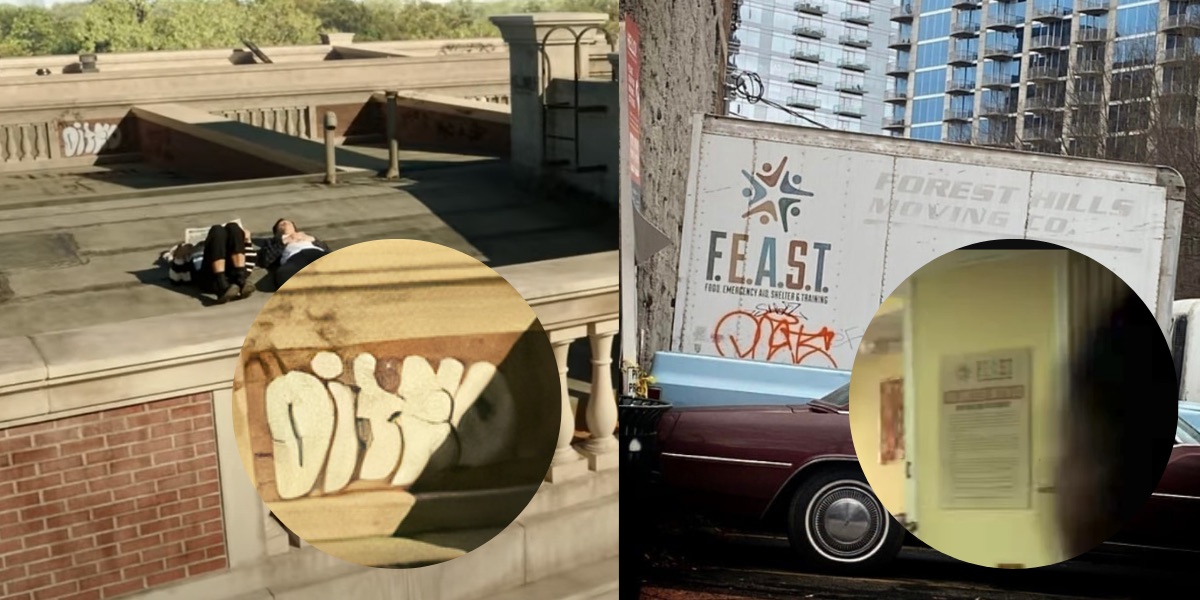 In the scene where MJ and Peter are lying on the rooftop of a New York building, spray painted on the wall is the name “DITKO,” a tribute to Steve Ditko, the legendary comic book artist and visual creator behind Spider-Man and Doctor Strange.

Another is the poster where Peter is running with the acronym “F.E.A.S.T.,” hinting that the cafeteria might be a part of a F.E.A.S.T. shelter, a charity founded by Martin Li a.k.a. Mister Negative, who could possibly be a new villain.

Fans just have to lengthen their patience and wait for the movie’s debut on Dec. 17.