Style Living Self Celebrity Geeky News and Views
In the Paper Shop Hello! Create with us
Avee Navarro Tan

VENICE, Italy—Sometimes you tell the day by the bottle of frizzante that you drink.

Yael Buencamino-Borromeo would jokingly call it a “concert tour”—as the entourage (composed of herself as co-curator with an artist, a musicologist, a weaver, cultural workers from the NCCA [National Commission on Culture and the Arts] and The Met, photographers Avee Navarro Tan and Andrea D’Altoé, and this author) journeys from Venice to Padova to Mestre to Conegliano to Florence to Bologna to Rome and then back to Venice.

Like a band of thermal-wearing, ChapStick-dabbing, BonJovi-ing gypsies tracking across those wintering Italian cities aboard Frecciarossa or Trenitalia coaches; discussing with Filipino communities in Italy the exhibition mounted by the Philippine Pavilion at the recently concluded 59th Venice Art Biennale; conducting workshops; as well as sharing meals and life stories with our kababayans.

Living and breathing art in the Philippines

For the outreach tour, our group brought percussive kalutang sticks and speakers in suitcases and played the music woven—yes, woven by master weaver Sammy Buhle—into textiles that hung from the rafters and spread across the floor of the Arsenale during the exhibition.

The Pinoy attendees played the patterns with aplomb (the minimalist music of Steve Reich meets the hypnotic beats of indigenous groovies from Marinduque). Loud, scratch, shuttle. We will… we will rock you, Firenze!

Ah, the garnering of road tales—everything from sipping Conegliano Prosecco and snacking on radicchio one moment, to finding ourselves at the center of a transport strike the next (walking like bedraggled pilgrims from the Sta Lucia train station to our apartment hotel in Venice, registering crazy figures on the Walkmeter app, propping ourselves with shots of fragola).

Wait, there’s more… A moving car mishap in Padova, an exhibition of artworks and ternos in Bologna, a lost girl finding herself in Rome instead of Verona (wandering into the turf of noble Brutus instead of loverboy Romeo’s), the organizers in Conegliano creatively decorating their lecture space like a bus of sorts, as well as conversing with the various Filipino community leaders (particularly the capable ones such as Charito Abalos of FilCom, Conegliano and Quintin “Kentz” Cavite of Guardians Emigrant Cluster Legions Int’l Inc.), with Darwin Gutierrez helping out the NCCA and other visitors in any way he can. The epiphanies, the friendships were to be found and made in each of the cities.

Heavy liquid: Milk of Dreams at the Venice Biennale

If for the vernissage or opening ceremonies. the people behind the Philippine Arts in Venice Biennale (PAVB) organization focused on the exhibition itself and how Filipino art rightfully deserves its own place in the “Olympics of the art world,” the finissage or closing activities involve reaching out to Pinoys in this part of the world: the waiters, the factory or healthcare workers, and the household helpers.

This significies how the Philippine participation in the Venice Biennale is a gig for every Pinoy. We are all part of one existential tapestry. The artistic aspect is still essential, but there is a human dimension involved.

Of what use is art, anyway, if it can’t touch people’s lives?

Feedback is overwhelmingly good. I remember former Philippine Ambassador to Italy Domingo Nolasco telling me that Filipinos were known before throughout Italy mainly as trustworthy, hardworking individuals, but because of the country’s participation in both the art and architecture biennales, many Italians are seeing us more and more in a new light: as artists, creators, thinkers, dreamers and visionaries.

Nick Lizaso: 10,000 stories and one heart for the masses

When conversing with Pinoys during the “Visualizing Sound” lecture-workshop series, PAVB head Riya Lopez points out the origin story of the country’s participation in the Venice Biennale.

When Senator Loren Legarda visited the floating city in November 2013, she noticed how countries such as Maldives and Tuvalu were participants in the biennale while the Philippines (inhabited by people who live and breathe creativity) was notably absent. The senator sought to change things.

Lopez details what happened next: launching inaugural pavilions at Palazzo Mora, the subsequent move to the Arsenale itself (the Biennale’s primary space), organizing a slate of well-received exhibitions, chalking up a historic first such as receiving the Special Mention citation for “Structures of Mutual Support” at the 17th Venice Architecture Biennale last year, up to this year’s entry: “Andi taku e sana, Amung taku di sana/All of us present, This is our gathering.” A defiantly appropriate declaration, I should say, after all of us overcoming the past two plague-ridden, locked-down, nowhere years.

Yael talks about the genesis of the woven-sound-transcription project she co-curated with Arvin Flores.

“What I find fascinating about Gerardo Tan is how his mind works. There are not many people I know who will walk into a weaving house in the Visayas and—instead of noticing how beautiful the fabrics are—will listen to the sound, the ‘music’ of the looms.”

Gerry Tan thinks differently from you and me. He once had a candle made in the likeness of the Blessed Virgin Mary. He lit it up and filmed the candle as it burned.

Tan then reversed the footage: so, instead of seeing a candle melt, viewers get to see Mary “appearing” from out of the clump of melted wax. He called it “Apparition.”

Everything has a way of appearing, disappearing, and reappearing as an entirely new thing—that is the way.

“What if the weavers were weaving the sounds that the pedal loom was making,” the visionary artist asked.

An ethnomusicologist was brought in to create a special notation for what Tan recorded in weaving houses in Miag-ao, etc. Standard Western musical notation just won’t cut it — as indigenous musicians in Tibet and Indonesia as well as modern composers such as John Cage, Gyorgy Ligeti and Edgar Varese had found out.

Textiles were then made by a master weaver with mad weaving skills whose mother and grandmother were both practitioners in the traditional sense; only this time the textiles bear patterns that are new, innovative and, er, “musical.” They embody the transcription of those very sounds the artist initially heard. 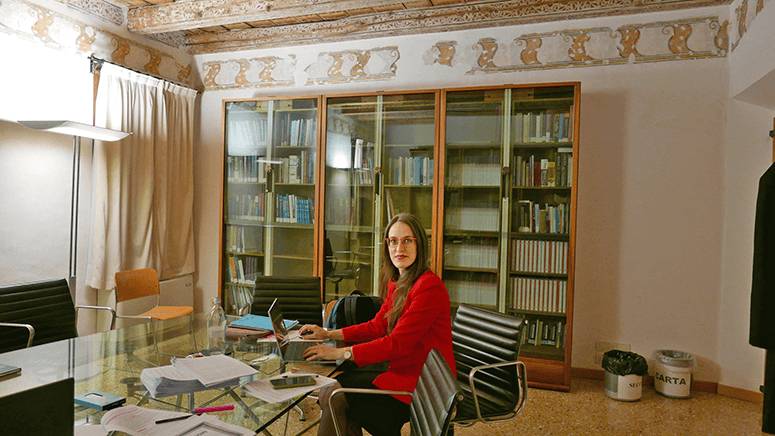 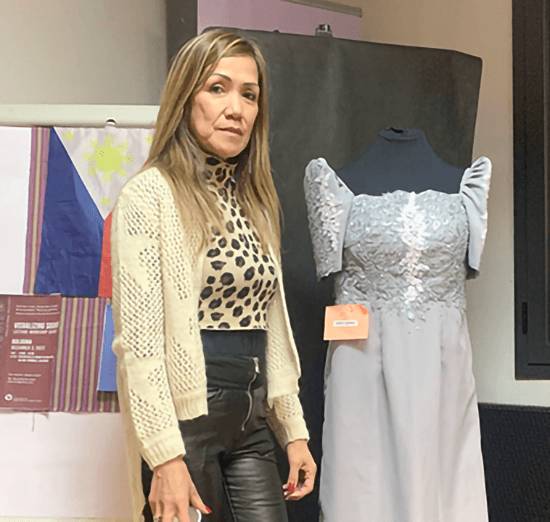 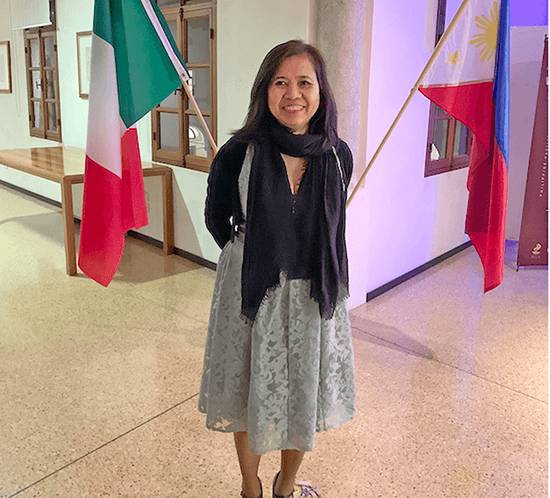 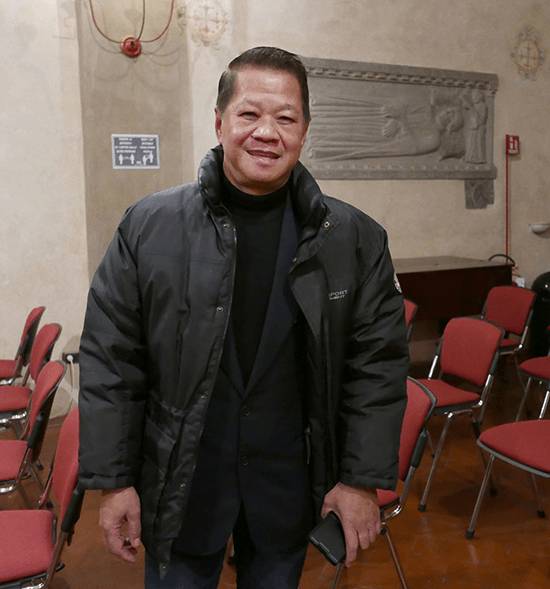 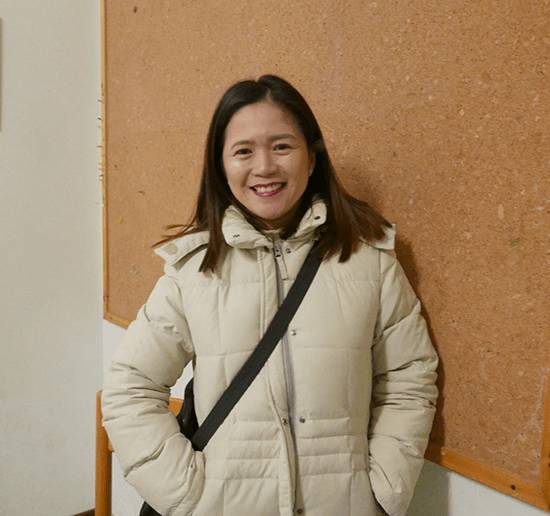 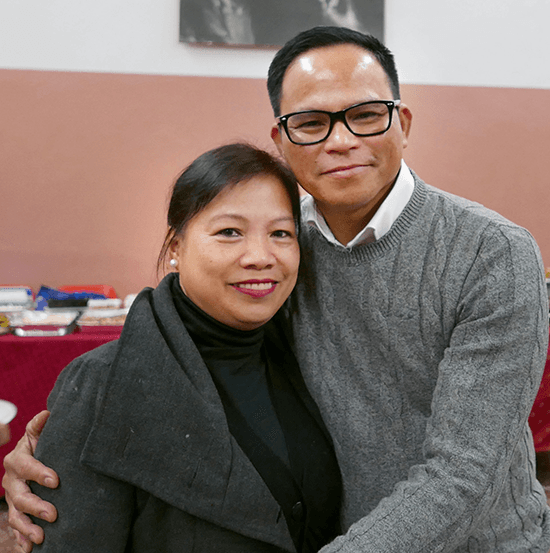 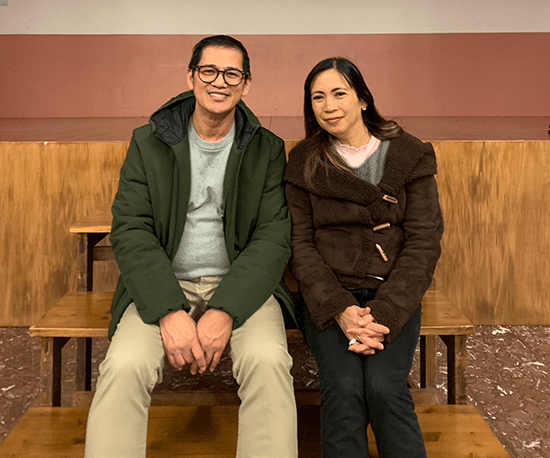 And now we are in, for example, a deconsecrated Florentine church which belonged to the Knights Templar, a former convent in Treviso near the Castello di Conegliano, or other cold, stony spaces resonating with medieval vibes, all of us present: Filipinos—who are far from home or have made a new home—interpreting the music from the fabrics, transmuting signifiers into other signifiers. Oh, how we rocked those threads.

The beat—ringing and hypnotic—proclaim our presence and score these gatherings: we are here, we belong, and we have a thousand chants, a thousand stories just dying to be heard.

The Philippine participation at the 59th International Art Exhibition—La Biennale di Venezia is a collaborative undertaking of the National Commission for Culture and the Arts (NCCA), the Department of Foreign Affairs (DFA), and the Office of Senate President Pro Tempore Loren Legarda. For information, visit philartsvenicebiennale.org. See updates on Facebook and Instagram via @philartsvenice.