Style Living Self Celebrity Geeky News and Views
In the Paper Shop Hello! Create with us
Avee Navarro Tan

VENICE, Italy — All this talk about changing the “history of the future” or becoming “post-human” (all the while referencing an artist who once said her birth was the result of her mother cohabiting with a machine), it smacks of how disaffected many of us are with the state of things. Is this the real life? Civilization is crumbling (as documented in — or allegedly facilitated by — TikTok); people are devolving (becoming staunchly anti-science and avid gaslighters); the plague is overstaying (as many variants as those ever-replenishing Marvel Cinematic Universe cash cows); and history is becoming revision-friendly and as silly as putty where “down is up, up is down…” (democracy is deemed wicked; dictatorship, good). Art, dreams — and, in the right moment, a bottle of chilled Bellini — can bring us to a state of grace, take us somewhere else, allow us to transcend these seemingly inescapable gutters and trolls. And the grandest of canals lead to “The Milk of Dreams”-themed 59th International Art Exhibition of La Biennale di Venezia as curated by New York-based Italian curator Cecilia Alemani.

The focus of this year’s Venice Biennale incarnation is on Surrealism, still an interesting subject. Even if the odd pairings in news cycles for the past few months (“gazpacho and police,” “Nazi flags and Disney World,” “Nutribun and Michael Jordan” etc.) have stolen the strange out of the super-realism of Dalí and Breton.

After marinating in Marikina for the past two years (visited only by the angels of Grab and Food Panda), I can say it sure as hell feels good to walk the halls of the Arsenale (but not before getting a macchiato near the Ospedale) and afterwards to strut past the Paradiso and into the garden itself, the Giardini. Dream, dream, dream away: the sun is up in the most improbable of places, the swan of cities wherein Stravinsky wanted to be buried. And then we walk under row after row of severed human heads and horses (from Giulia Cenci’s “Dead Dance” installation). Bravo. Bellissimo. We want the going to get weirder.

The focus of this year’s Venice Biennale incarnation is on Surrealism, still an interesting subject. Even if the odd pairings in news cycles for the past few months (“gazpacho and police,” “Nazi flags and Disney World,” “Nutribun and Michael Jordan” etc.) have stolen the strange out of the super-realism of Dalí and Breton.

Five countries — Cameroon, Namibia, Nepal, Oman and Uganda — participate in the Art Biennale for the first time, while three others — Kazakhstan, Kyrgyzstan and Uzbekistan — participate for the first time with their own pavilion. The Russian Pavilion looks grandiose in its emptiness like the shell of a megayacht (as the curator and the two artists declined to participate in protest of Putin’s invasion), while visitors constantly troop to the Ukrainian Pavilion with Pavlo Makov’s “Fountain of Exhaustion” (a metaphor for “global exhaustion” from the pandemic, social media, depletion of the earth’s resources, war, everything). On the second day of the war, co-curator Maria Lanko packed the artwork’s component-funnels into her white Audi on a six-day, 10-hours-a-day backroad drive from Kyiv to Romania accompanied by a friend and her dog. (From there, she traveled to Budapest and then eventually ended up in Vienna.) Lanko could see the faraway fires of burning towns in the course of her escape. Meanwhile, Makov was holed up in a bomb shelter in Kharkiv. He would eventually make his way out of Ukraine with his wife and 82-year-old mother.

In a collateral exhibition titled “This is Ukraine: Defending Freedom” at Scuola Grande della Misericordia, Ukrainian president Volodymyr Zelensky sent a video message: “There are no tyrannies that would not try to limit art. Because they can see the power of art. Art can tell the world things that cannot be shared otherwise.”

The lockdown Maison is filled with art, tradition and spirituality

President Zelensky’s wife, first lady Olena Zelenska, also sent a message for the exhibition: “Every painting is under threat: art is mortal, like everyone else.”

The jury of the 2022 Art Biennale awarded the Golden Lion for the Best National Participation to Great Britain and the Golden Lion for the Best Participant in the International Exhibition “The Milk of Dreams” to Simone Leigh whose art champions black women and their traditions which, Leigh feels, “have been left out of the archive or left out of history.” What is remarkable is that 90 percent of the participants are women or gender non-conforming artists, usurping the “usual role of the white ‘Man of Reason,’ the universal arbiter of everything.”

With the Philippine Pavilion occupying its rightful place in the Artiglieri (courtesy of the hard work of the Philippine Arts in Venice Biennale Coordinating Committee [PAVB-CC] of the National Commission for Culture and the Arts [NCCA] as well as the office of comebacking Senator and project visionary Loren Legarda), we art-famished Filipinos scoured the other exhibitions spaces and country pavilions and see what stuff their dreams are made of — from suicidal centaurs (Denmark) to ashes from ritual fires (Switzerland), from widening Giger-like gyres (South Korea) to the green elephant(s) in the room (Katharina Fritsch). 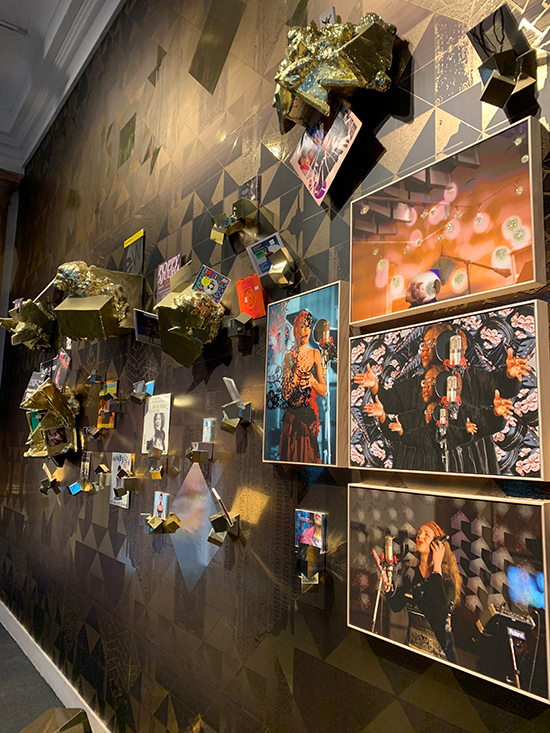 “Feeling her Way” by Sonia Boyce 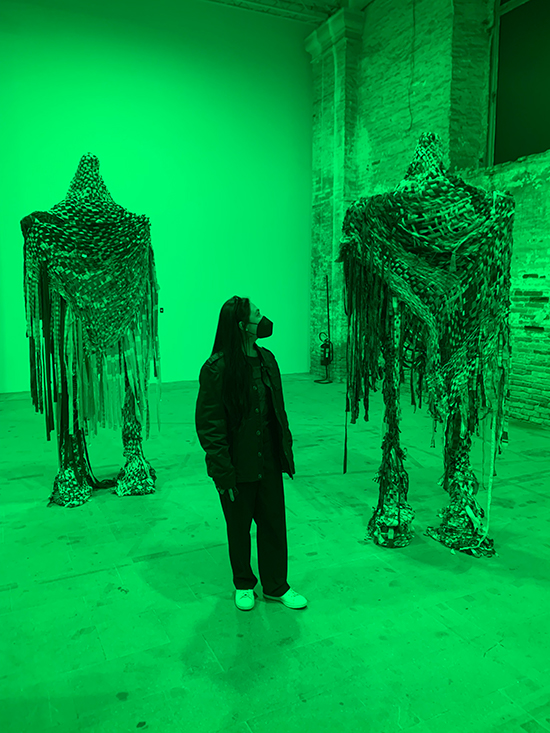 “Sentinels of Change” by Sandra Mujinga 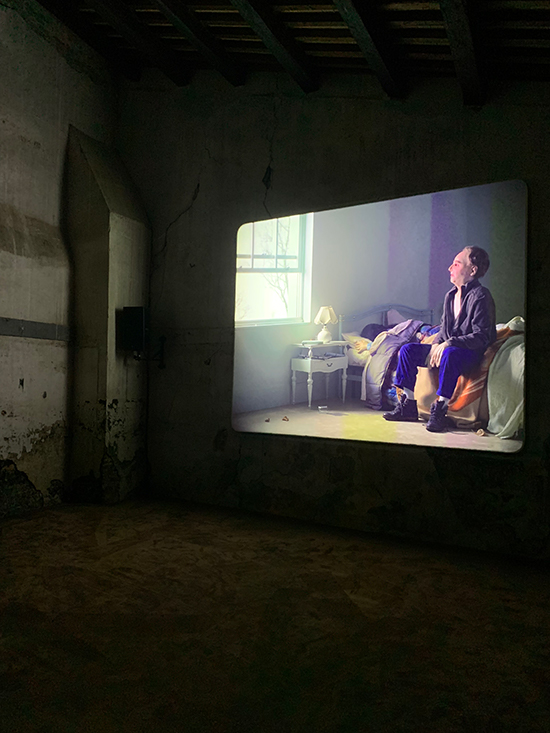 “The Parents’ Room” by Diego Marcon 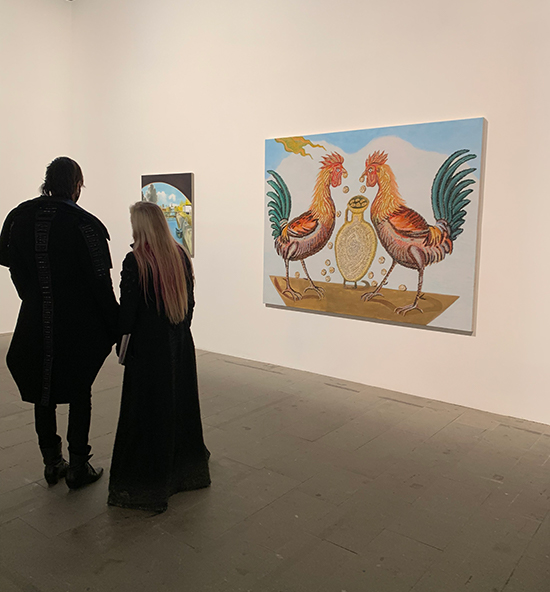 A painting by Allison Katz 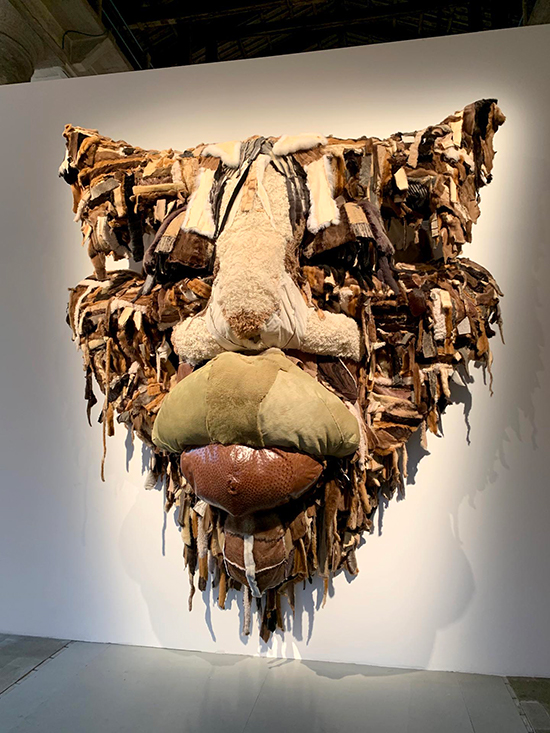 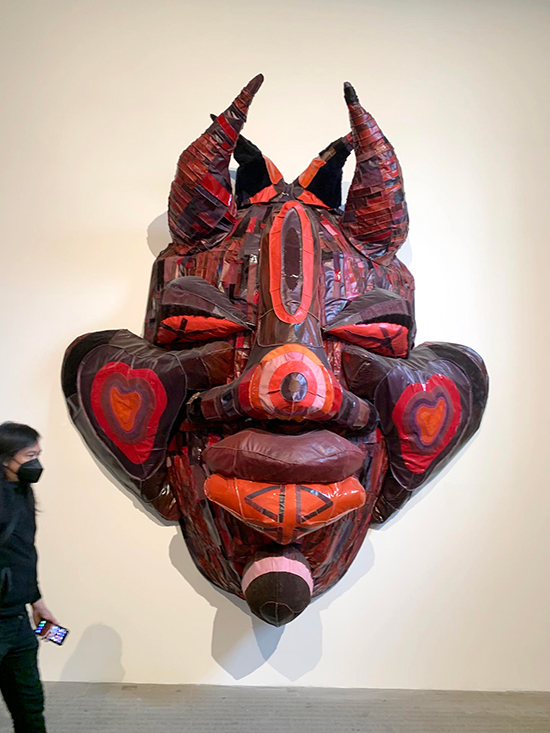 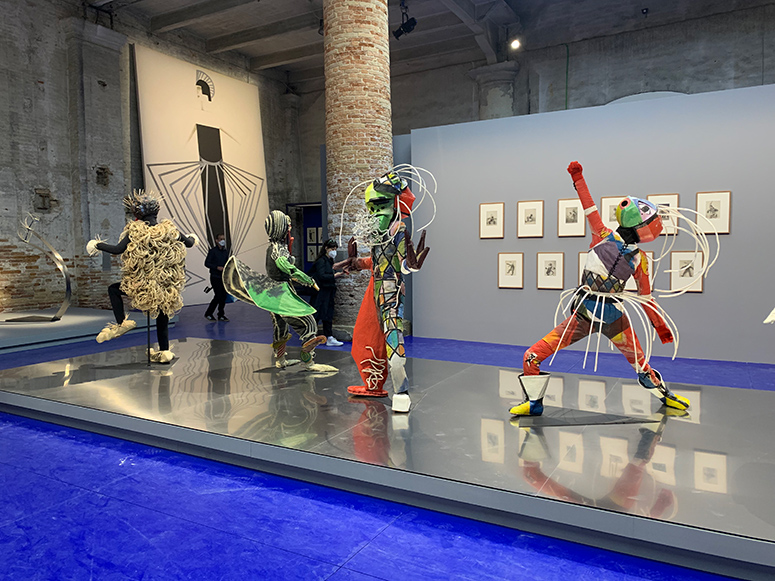 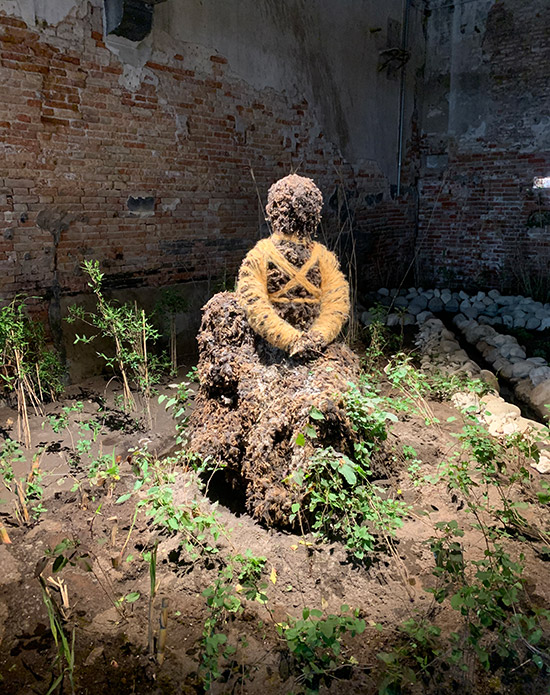 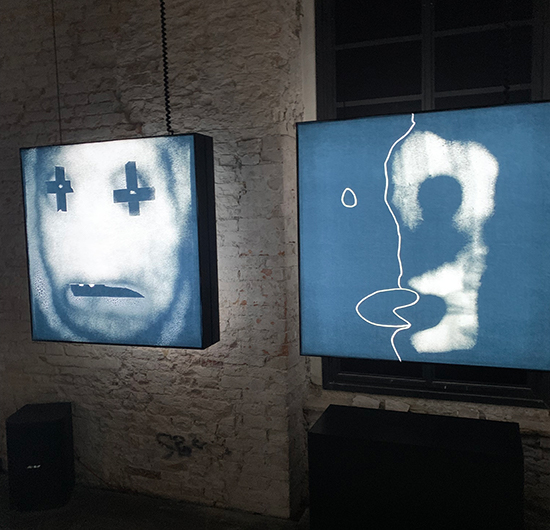 “The Theatre of the Apparitions” by Roger Ballen 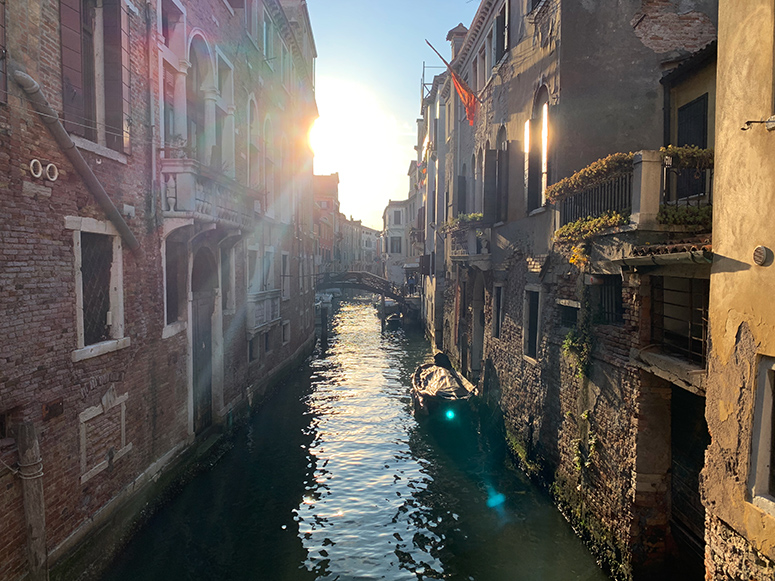 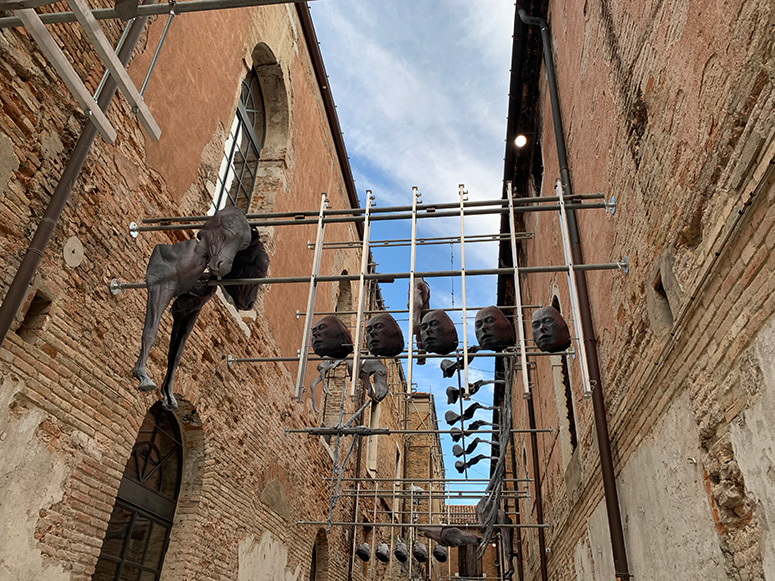 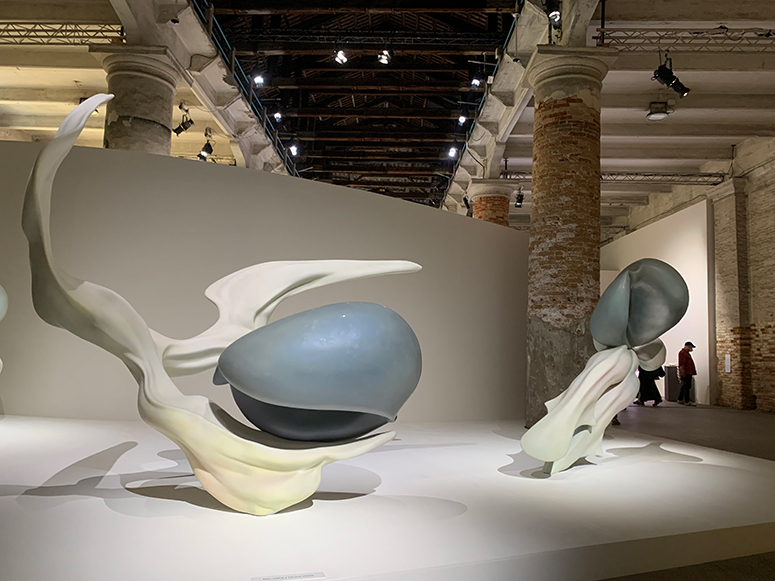 “Feeling her Way” by Sonia Boyce

“Sentinels of Change” by Sandra Mujinga

“The Parents’ Room” by Diego Marcon

A painting by Allison Katz

“The Theatre of the Apparitions” by Roger Ballen

In one of the videos at the biennale (Lynn Hershman Leeson’s Logic Paralyzes The Heart), a cyborg implores her avatar to teach her how to dream — something which many of us Filipinos sadly (judging from recent events back home) have failed to do: to dream and to remember. And a dreamless, amnesiac existence, of course, is akin to being doomed, lost and artless.

The Philippine participation at the 59th International Art Exhibition – La Biennale di Venezia is a collaborative undertaking of the National Commission for Culture and the Arts (NCCA), the Department of Foreign Affairs (DFA), and the Office of Deputy Speaker and Congresswoman Loren Legarda. The commissioner of the Philippine Pavilion is Arsenio “Nick” J. Lizaso, chairman of the NCCA. The Philippine Pavilion will also be made accessible through its digital programs and virtual tours. For information, visit philartsvenicebiennale.org. See updates on Facebook and Instagram.