Netflix has rolled out official merchandise for Squid Game in their U.S. e-commerce shop as the Korean survival thriller reaches unprecedented global popularity.

The streamer’s merchandise for Squid Game, which fans can shop for online at Netflix.shop includes minimalist t-shirts with the show’s logo and key images from the series for $34.95 (roughly P1,265) each.

Customizable patch shirts with player numbers cost  $39.95 (P2,026) while a customizable black hoodie that lets you pick a square, triangle or circle icon (representing three different guard ranks) along with the show’s logo in English or Korean costs $49.95 (P2,533). 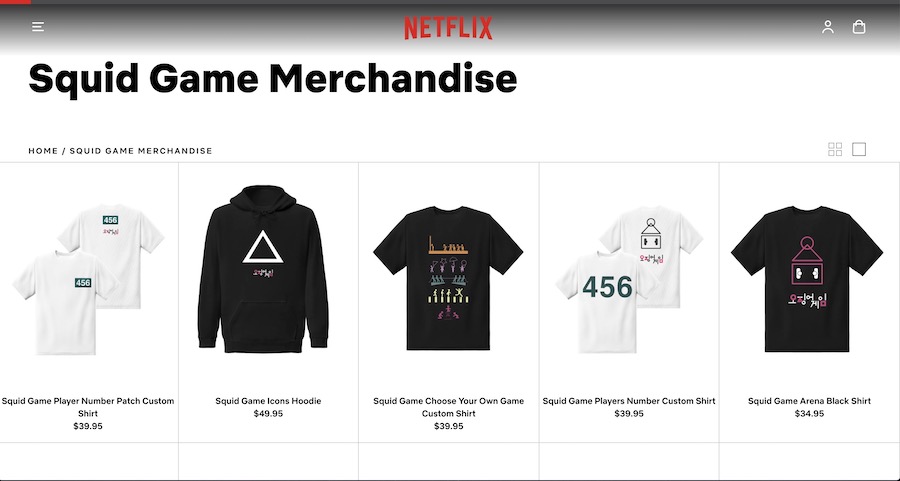 “Accept the invitation at your own risk,” reads the apparel’s description on the Netflix.shop site. “If you’re like us and love Squid Game, you’ve come to the right place — and the stakes aren’t as high.”

While the site is not selling officially-licensed Squid Game player tracksuits, red guard jumpsuits, or masks in their shop, online sellers both in the Philippines and in other countries have been quick to capitalize on the show’s popularity, offering unofficial Squid Game-inspired costumes.

Locally, costume duplicates have been popping up on e-commerce sites like Shopee and Lazada just in time for the upcoming Halloween season, along with game props and related merch.

Manila-based restaurants have also come up with various food offerings inspired by the show, including the viral Honeycomb Dalgona candy.

‘Squid Game’-inspired food offerings and challenges to try in Manila

Netflix.shop, the official e-commerce site of the streaming giant, was launched just last June 2021. The online shopping site contains only a few curated, limited-edition collections aimed at generating buzz for some original shows.

The site also sells apparel from Sex Education, action figures for The Witcher, streetwear from anime series like Yasuke and Eden, and a few home decor items for Lupin done in collaboration with the Musee de Louvre.

Unfortunately for Philippine-based fans of Netflix’s hit shows, the items in the e-commerce shop are currently available for purchase only in the U.S.

Squid Game, which premiered Sept. 17, has consistently ranked as the No. 1 TV show in countries around the world, according to Netflix in the past few weeks.

Last week, Netflix co-CEO and content chief Ted Sarandos said the show has a good chance of becoming the streamer’s biggest show ever—and that it will “definitely” rank as the streamer’s most popular non-English original series to date.