South Korean series Squid Game is the latest binge-worthy show on Netflix and has quickly become the internet’s latest obsession.

The survival drama has soared to No.1 on the streamer, ranking in 22 countries including the U.S., becoming the first South Korean drama to reach the milestone on the streaming platform.

According to streaming analytics platform FlixPatrol, Squid Game, which was first released on September 17, is now No.1 on the U.S. Netflix chart, surpassing the latest season of widely popular British teen comedy-drama Sex Education, which had previously topped the U.S. ranking.

Starring Lee Jung-jae, Park Hae-soo and Wi Ha-joon, the thrilling series revolves around 456 contestants who are all desperately in debt, who are invited to compete in a series of deadly survival games to win a large cash prize.

Thanks to the show’s global popularity, it's no surpise that costumes, props and games featured in the series are becoming popular in the real world.

While Netflix has not released any official merchandise, green Squid Game-inspired tracksuits, numbered player shirts, sugar honeycomb kits, and even marbles have seen a surge in demand.

South Korean news site Pulse reports that Squid Game tracksuit replicas are currently in high demand, shipping on online auction platform eBay. Another Korean news site noted that interest in marbles surged after it was featured as one of the life-and-death games in the most heartbreaking episode of the series.

“On Auction, an eBay Korea e-commerce site, sales of marbles jumped 860 percent for the week from Sept. 17 through Sept. 23 compared to the same period a month earlier,” the news report noted.

Interest has also been high for the simple aluminum lunch boxes like those used by the doomed contestants for their meals and “Dalgona kits” complete with a cooking ladle, spatula, plate, cutter and baking soda to make the cookies made in the Sugar Honeycomb episode.

Clips of people making Dalgona, the retro candy made by mixing melted sugar and baking soda, featured as one of the tasks on the show have also appeared widely on social media sites.

With Halloween just around the corner, athletic wear like the dark green and red tracksuits, player shirts, as well as cosplay masks used by the Front Man and staff guards with the triangle, circle and square logos from the show as well as gift items have likewise popped up on local online shopping sites.

On Shopee, you can now get Squid Game Costume Hoodie Sweatshirt Tracksuits for P592 to P747 depending on the size, while a Front Man Mask 3D Printed masks costs P899.

The viral Squid Game Dalgona Game Kit / Korean sugar Candy Making Tools Set is selling for around P995, while the retro bento lunch box costs P900. You can also grab some Squid Game Marbles that comes with an Invitation / Calling Card with Pouch for just P129.

Check out the gallery below: 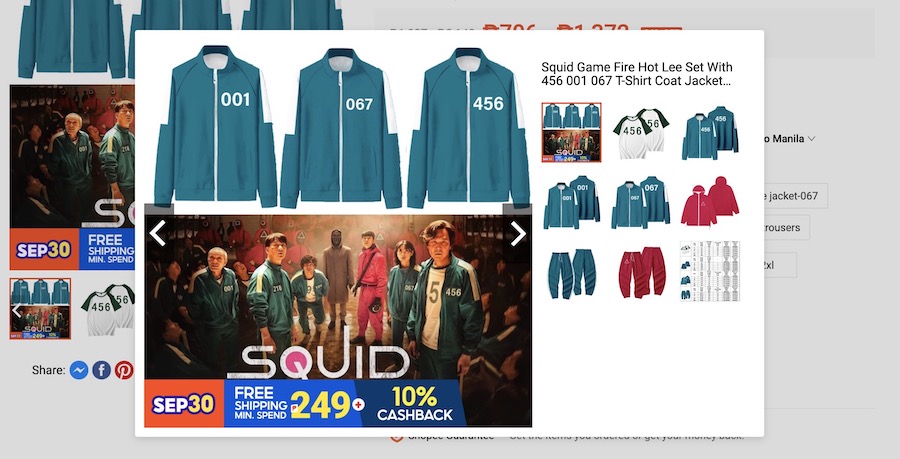 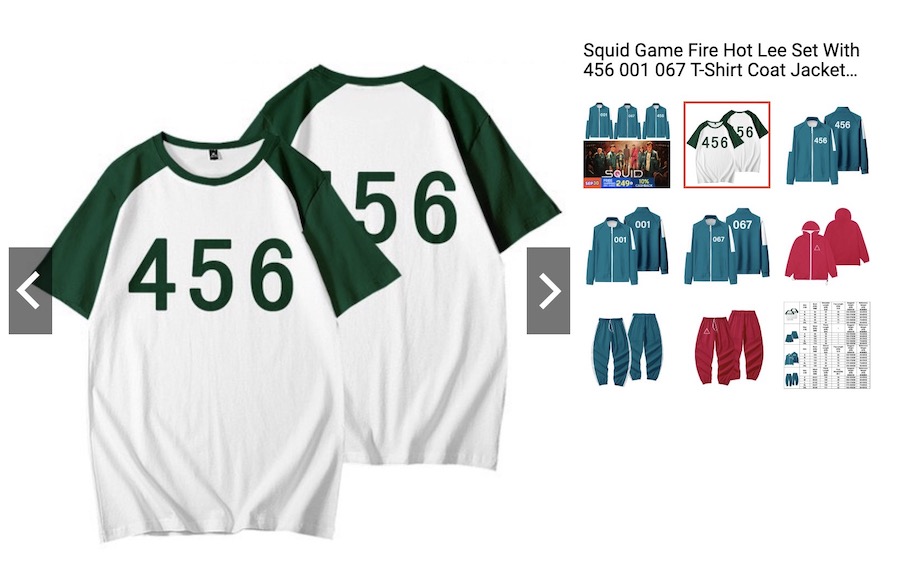 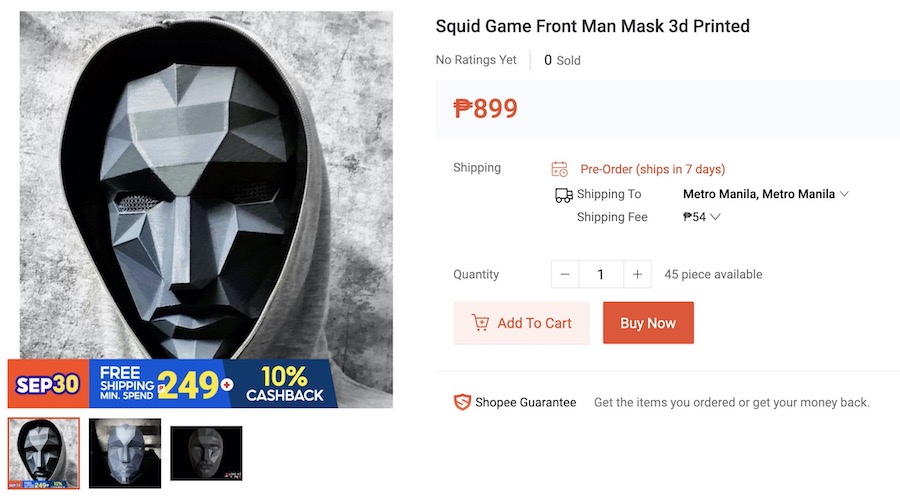 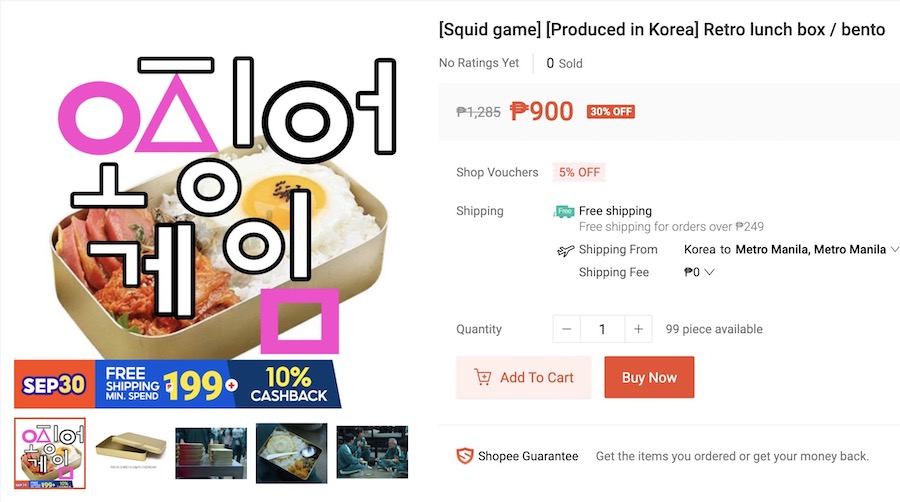 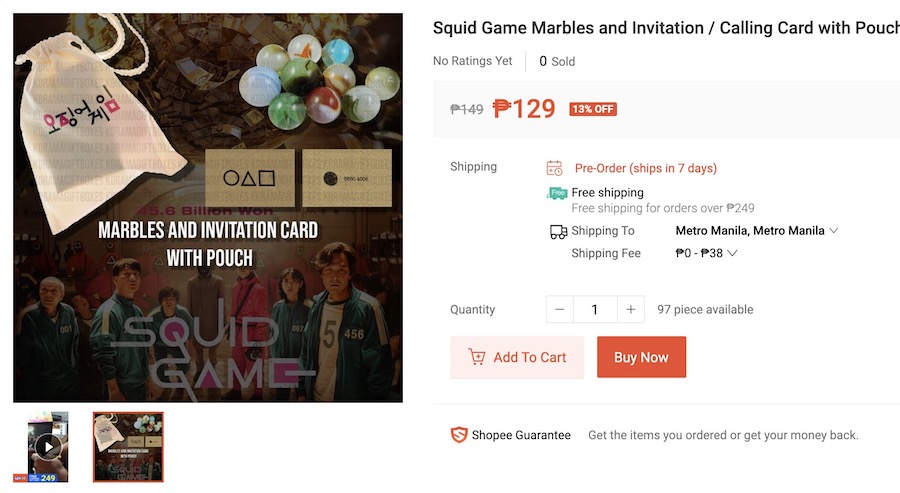 In the mood to shop at a real mall?

In case you missed it, a giant replica of the doll from the "Red Light, Green Light" game has been spotted outside a mall in Ortigas in Metro Manila.

The 10-foot Squid Game doll wearing the yellow and orange dress has been keeping an eye over jaywalkers.

According to Netflix, the doll can be found guarding the Robinsons Galleria Ortigas Mall East Wing Entrance.

(Images via Netflix/Gallery from Shopee sellers)