Remember when people used to say that you can't make money playing video games? Well, now, there are a handful of games created for the primary purpose of bringing real coins to players' pockets.

These so-called play-to-earn games or P2E have seen a massive boom in the middle of the pandemic. With the lockdowns affecting numerous jobs, Filipinos turned to alternative ways to make a living, including gaming. And for P2Es, all one would need is a smartphone, internet connection, intuition, and zeal to play.

In the Philippines, the blockchain-based Axie Infinity is in its heyday with Filipinos making up 40% of its 1 million daily active users.

These Axie Infinity players come from different walks of life—a mother, a fresh college graduate, a tricycle driver, an elderly couple—and have generated income amid tough times through the game.

As more success stories emerge, the Bureau of Internal Revenue (BIR) said on Tuesday, Aug. 24 that Axie Infinity gamers will also be subject to income tax, alongside social media influencers.

Your gains from Axie Infinity are subject to income tax, too - BIR

How do you get gains?

Axie Infinity follows blockchain economics where you make money by investing and spending more time in the game.

Players earn cryptocurrency, which they can exchange for real money, by breeding, trading, and battling Pokemon-like characters called Axies. These monsters are used to battle to win Small Love Potions (SLPs), which can either be used to breed more digital pets or sold for profit in the marketplace. They can also earn Axie Infinity Shards (AXS) tokens to buy digital goods and assets.

Playing Axie Infinity isn't free, though. To get started, you have to shell out around P30,000 (prices change depending on the market, the type of Axie, etc.) to buy three starter monsters.

Why are these pets so expensive you might ask? It's because they are non-fungible tokens or NFTs, meaning each Axie is a one-of-a-kind digital asset—think of it as a very unique trading card which you trade for an entirely different card.

What does "scholarship" mean in Axie Infinity?

Those who want to play the game but don't have enough money to buy starters can apply for "scholarships" from "managers." Managers are veteran players and breeders who have a lot of Axies but don't have enough time to play, while scholars are aspiring players managers can get to play on behalf of them. Typically, scholars and managers split earnings 60/40, respectively.

Companies like Axie University and Yield Guild Games provide scholarships for those who want to play. However, it's not that easy to get a scholarship. An Axie Infinity account can't be used on multiple devices, so a manager can only get one scholar per account. Scholars have to be really active in playing the game, too. 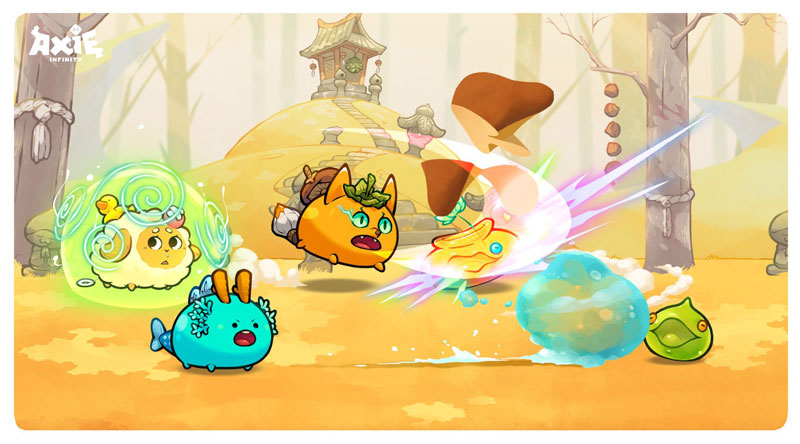 What are the risks?

As with any investment, there are risks to putting money in Axie Infinity. It's not the money-printing machine that it seems. Basically, you are engaging in investment with the game and purchasing a share of its revenue. If players abandon the game, there will be no revenue causing your share to become worthless.

Like Bitcoin, SLPs and AXSs are volatile and those who want to play need to understand how cryptocurrency and blockchain works.

Axie Infinity is developed by Vietnamese company Sky Mavis and was initially released in 2018. After BIR's taxing memo, Sky Mavis tweeted that it will work with governments, encouraging players to "abide by the laws of their home countries."

Play-to-earn is an important shift in the nature of work; we look forward to working with physical nations (governments) on a path forward that encourages innovation and empowers gamers.

This controversial video game lets you play as Jesus Christ

Dolly de Leon is the new captain. Deal with it.