Melbits World is a cute and engaging puzzle platformer from AKG Games that was recently released on Google Play and the App Store for free.

The family-friendly game allows players to explore 72 Levels across six worlds, each with unique challenges.

If you enjoy figuring out puzzles and customizing virtual pet-like characters, there’s no harm trying out this casual game, since it’s free.

Melbits are modern-day pixies in today’s digital landscape. These creatures are described as “champions of good vibes and positivity on the Internet” hidden within every connected device such as mobile phones, tablets and computers.

“Every time we chuckle at a meme or enjoy a cat video, Melbits get energized and multiply in strength and number.”

The Melbits World faces challenges that reflect online experiences including online toxicity and cyberbullying. To secure peace in their realm and maintain a harmonious online experience for all, players have to guide these cute characters through devious puzzles in an immersive 3D environment. 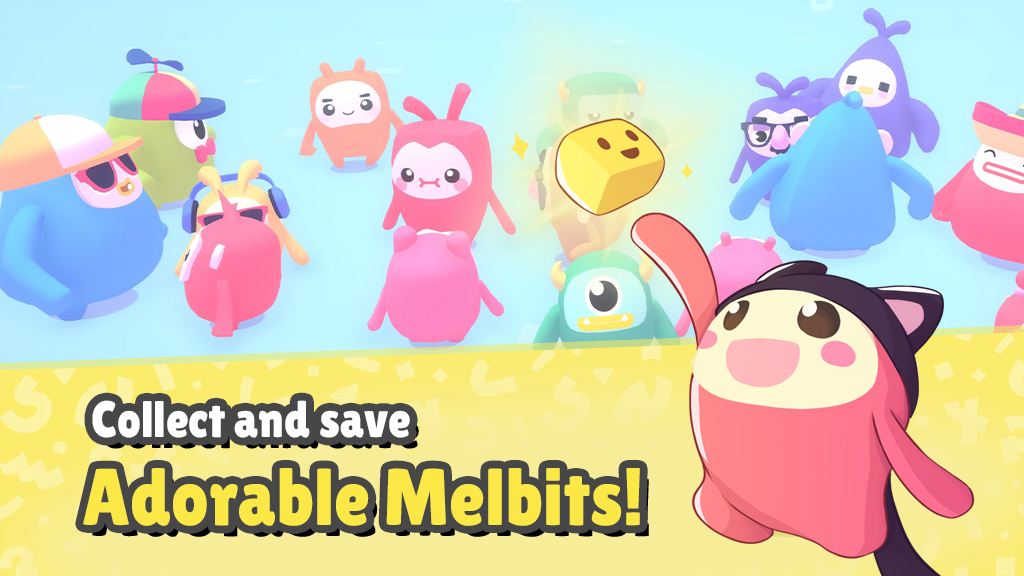 The game’s overall look and design with the use of bright colors and cute creatures will immediately appeal to kids.

The 3D world and characters are designed using basic geometrical shapes. The game’s look is very easy on the eyes, pleasant to play and relaxing. All the characters look soft, huggable, and bouncy and have their own distinct personalities.

The simple worlds they inhabit feature a lot of stylized nature-inspired details like trees, streams, flowers, and more.

The background music of the game feels very positive and uplifting. The soundtrack feels very summer-inspired to match the scenery and worlds on screen. The sound effects add to the gameplay, with positive little sounds whenever you save a Melbit; or sad crying when you make a mistake and cause one of them to fall off a platform.

The annoying laughter of the evil Glitch whenever it consumes a Melbit will leave you frustrated and make you want to beat the game even more.

The game starts out as a simple and straightforward puzzle in the first world where the goal is to get the Melbits from one pipe to the other. Sounds simple, right?

While the first few stages are relatively easy, the later stages are surprisingly more challenging than they look. As the game progresses, some stages will leave you scrambling to figure out the correct timing of your moves and failing multiple times before you get the sequence right.

The main challenge is you have to help out several characters at a time, with the controls for moving colored blocks, springs, bridges, and more, within a specific time-frame, which will really test your motor coordination skills. The characters all walk at a fixed pace, and can only move in one direction unless they bump into each other or obstacles.

You need to be able to multi-task and predict movements of the characters and understand depth properly to get everyone safely where they need to go without running into evil Glitches within the time limit.

The puzzles get even more complicated in the remaining worlds with all manner of controls to take care of including falling platforms, arrows, sliding elevators, fans, and more. You have to plan your moves very strategically.

Completing a level unlocks the next stage, but you can always go back to previous levels to replay them for a higher score.

I appreciated that you could fast-forward the character's movements so you don't have to wait for them to walk in some sections.

Aside from the intricate puzzles, another appeal of the game is the ability to customize the costumes of your Melbits.

For its Southeast Asian launch, Melbits World provides a variety of costumes which you can dress your characters in. You can adorn Melbits avatars with unique Southeast Asian-inspired accessories, including the Vietnamese Non La and the Filipino Salakot.

You can customize your characters on the menu screen with different hats, sunglasses, or have them don a unicorn or bee costume, and the costumes reflect in the game as they walk around, which adds a cute touch.

There are also a few rare skins up for grabs, which cost an additional fee.

The engaging gameplay, quirky characters and suprisingly challenging puzzles, are sure to delight and challenge players of all ages looking for a temporary escape and stress relief during these challenging times.

I found myself playing this longer than expected, and replaying earlier stages, just so I could save all the Melbits. Unlike some stressful competitive online games, Melbits World felt challenging but very calming and relaxing at the same time. You can tackle the game a few stages at a time whenever you feel like it and just pick up where you left off.

I also had my 11-year old nephew install and play the game to get his input and he described it as a “very fun puzzle game” which had a “cute 3D art style.” So there, it’s kid-approved.

Melbits World can be played on Android and Apple smartphones with minimum requirements of Android 4.4 or iOS 10. The game is available in English, Bahasa Indonesia, Thai & Tiếng Việt (Vietnam).